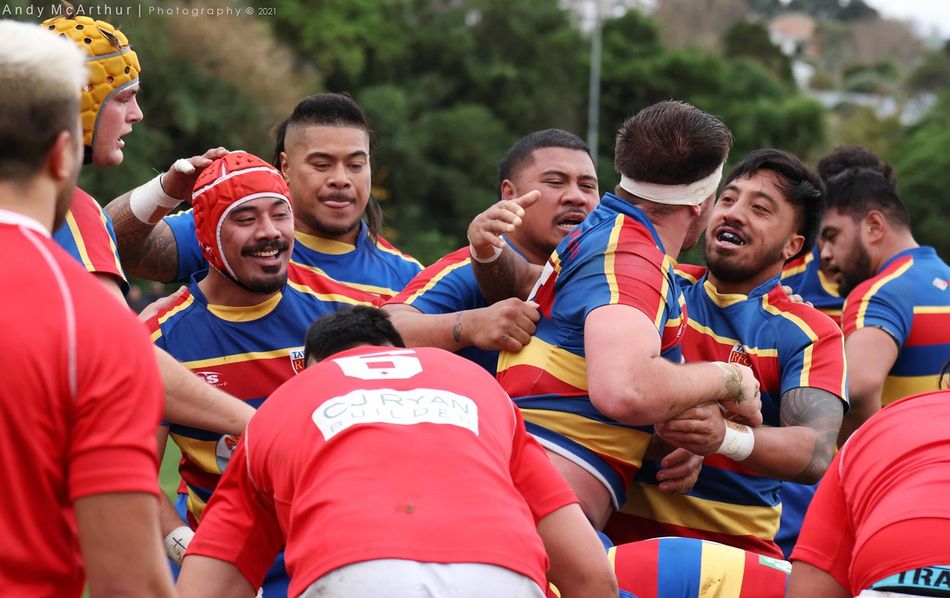 Tawa hooker Lotu Nuku (red headgear) and teammates celebrate a try in their 27-23 win over Marist St Pat’s earlier this season. These two teams will meet in the Jubilee Cup final next week if they both win their semi-finals. PHOTO: Andy McArthur.

For Tawa’s players, the best moment after fulltime on Saturday at the Polo Ground was getting inside the sheds where they could start to dry out and savour their Jubilee Cup knockout win over Oriental-Rongotai.

The second best was knowing they had produced close to an 80-minute performance, which had been lacking on several occasions throughout the season thus far.

“The last few weeks we have been working on keeping our focus,” said hooker Lotu Nuku.

“During some of our Swindale games against the bigger teams we have taken our foot off the throttle and lost control and have been stung late in the second half, said Nuku, who is his side’s leading try-scorer this year with 10 tries.

“Especially since the start of the Jubilee Cup round. The previous week against Petone we stepped it up and had better control of the game [won 27-7], and against Ories we knew they were going to come with a lot of energy the whole game and we held them out until the very end.”

Case in point was the Hutt Old Boys Marist match in their Swindale Shield meeting in round 10. Nuku himself scored two tries as Tawa led the Eagles 37-22, only for the visitors to come flying back and win 39-37.

“They came right back at us and Tomasi Alosio scored in the last five minutes for them to win the game.”

Saturday’s 19-14 win against Ories at the Polo Ground was achieved in freakish conditions, to earn a semi-final this coming weekend against HOBM at the Hutt Rec.

It had been raining steadily all morning and throughout the Reserve Grade curtain-raiser, which was moved to the number two field, but the rain got much heavier and turned into a deluge just prior to kick-off.

“We knew we were going to have to deal with the water and unique conditions as we headed back inside after our warm-up. But coming out for kick-off into that rain definitely added another challenge to it!”

Being a hooker, he was straight into his work in the early set-piece exchanges.

Nuku himself then scored what proved to be the winning try early in the second half. After winning a scrum penalty, Tawa kicked for the lineout in the corner, Nuku threw to lock Hemi Fermanis, joined the drive and peeled away to crash through the water to score.  Halfback Kemara Hauiti-Parapara’s conversion put Tawa up 19-7.

But there was still about half an hour to go for Tawa to hold on. That is where Tawa’s bench came into play.

For example, starting tighthead prop PJ Scheck gave it his all before being substituted by Ben Aumua-Peseta who carried his exuberance on, and Lipa Saveatama came on for injured centurion Tito Ioane late in the first half and splashed around well to the end.

“That is what is good about our squad this year – everyone on our bench is capable of being in the starting team, which is good for us but a bit of a headache for the coaches.”

Nuku is one of three players in the current Tawa squad who played in both winning 2013 and 2016 Jubilee Cup campaigns, the others being outside back Randall Bishop and outside back turned loose/tight forward Tito Ioane. Lock/flanker Hemi Fermanis, halfback Kemara Hauiti-Parapara and 2021 Hurricane Pepesana Patafilo also played in the 2016 team that beat MSP 24-20 in the final.

Nuku played most of the 2013 season, but cruelly missed the final as he got injured in the semi-final against OBU. He was the starting hooker in the 2016 final.

“Most of this season we have been feeding off the energy of the young players who have been leading the pack and us older boys have been hanging back and keeping everyone in line!”

Nuku originally joined the Tawa first year out of school from Scots College in 2010.

He was at Scots a few years after Victor Vito had gone through and just before the current crop of professional players starting with Jackson Garden-Bachop went there.

Former Wellington Premier referee Richard Gordon was someone who was there when he was there. “He was a year above me – it was quite funny coming into club rugby and having him referee our games.”

He recalls his Premier debut. “It was against Norths. I was scared running on to Jerry Collins Stadium. As soon as I came on I saw Faifili Levave and Api Naikatini right there and I went into a scrum and all I heard was let’s just get him.”

After two Jubilee Cup wins, he left Tawa at the end of 2017 for England where he joined Leeds Beckett University and played in the BUCS Super Rugby competition played amongst 10 English and Welsh universities.

“It is a good competition as it gives some guys who missed out on academy spots or who are late bloomers a chance to get recognised and pick up contracts.”

At the same time, he got an academic scholarship and studied marketing and management.

Covid-19 disrupted everything in 2020 and late last year he came home for his brother’s wedding, England went into lockdown again and he stayed here. He is currently working in his family restaurant business but plans on finishing his degree next year in New Zealand.

Re-joining Tawa this year he now has a chance to win his third Jubilee Cup.

HOBM at home will be a new challenge. The Eagles themselves have the seven-year itch, having previously won titles in 2007 and 2014 and looking to do so again in 2021.

Nuku also noted that their three opponents so far in the Jubilee Cup round have been against teams they failed to beat in the Swindale Shield – Petone, Ories and now HOBM. The first two results have been reversed, will the third one be?

Below: Lotu Nuku scores from a lineout drive earlier this year against Poneke.