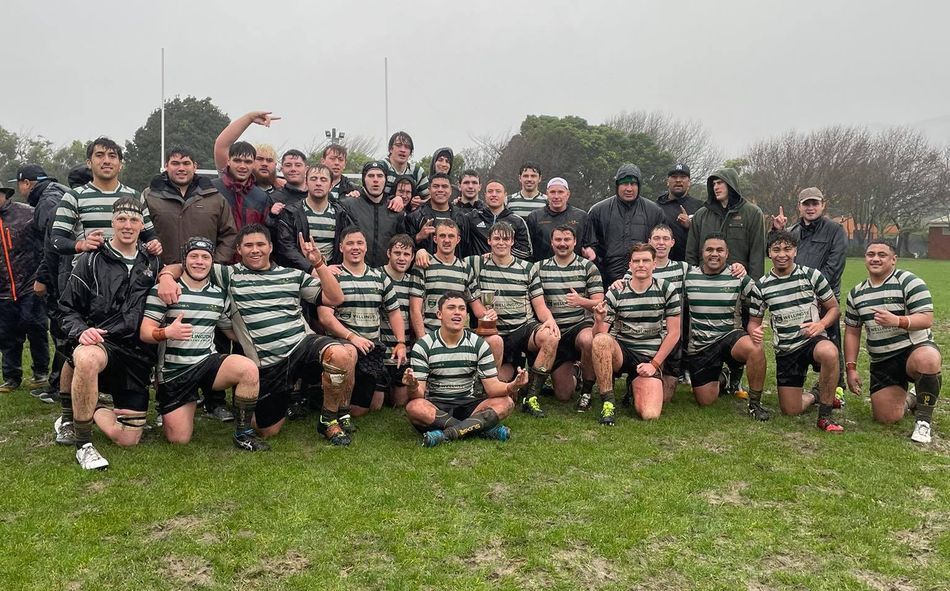 Daniel Livingston is still suffering the side effects of the epic victory by Old Boys University Green in the John E Kelly Memorial Cup Colts Division 1 final against Petone on Saturday.

The stormy decider featured five lead changes and lasted 100 minutes with OBU Green eventually outlasting the Villagers 25-21. The skipper and blindside is sporting a conspicuous black eye which was originally golf ball size.

“There were many big hits in the game, I am not sure which, but the black eye could have come from any of these,” he suggested when talking with the Huddy Hui podcast on Wednesday night. .

Daniel said that relief was the main emotion himself and the Kid Goats were going through at the end when the match finally finished, and they were crowned champions for the eighth time in a decade. OBU Green have won 131 of their last 152 games.

“It came all the way down to the referee’s call at the end! When they went over the line, we all just looked at the referee. There were too many bodies in the way for me to see and I could not tell if it was down or not.

“It was either going one of two ways – but luckily it favoured us, which was good!”

It was a fitting end to another hard-fought, competitive Colts season.

“What a way for the season to come down and end how it did though, it is always good to have a final like that and what the crowd wanted even if it was making them stand out in the rain a bit longer than they should have.”

“It was really difficult playing the extra minutes, the lungs weren’t used to that and I’m still feeling sore and tender four days on.”

As well as the adverse conditions on the field and the length of the match, the final itself was moved at the last minute. Originally scheduled for Petone Rec 1 it was moved to the number 2 ground and then on the morning of the final was transferred to the neutral ground at Hutt Rec 2. Did that affect preparations?

“Everyone was organising to get there earlier than normal, but as soon as the manager found out about the change in venue about 90 minutes before kick-off our communications channels kicked into gear and luckily we all got there in time.”

The game itself saw Petone leading 8-6 at halftime, with the advantage of the wind.

“The wind was a tricky one and it didn’t appear it would favour one team. But it kind of plugged one corner. Petone’s kicking game was good, they hooked it down and had us pinned down on our line.”

What was said at halftime?

“We talked about not worrying about that scoreboard pressure. It was good though to see the morale did not drop. We knew we would have that wind a bit more in the second half and we stuck to our gameplan.”

The gameplan had to be stuck to more rigidly of course.

“The weather forecast at the start of the week said it was going to bucket down, so we went with five forwards on the bench and prepared for a forwards dominated contest.

“But having said that we still had to use the backs and their boot in particular to give us field position.”

“Petone improved the defending of our lineout drive, so we had to run more variations off that because we didn’t have the muscle power to push them over.

“Petone made some lineout changes at halftime, and the conditions made that a good contest as the final developed.”

OBU got ahead 18-8 in the second half, with halfback James Cole an influential figure.

“Colesy makes an impact, and he had a few snipes and did a good job.

“I’m not sure if it was us that slackened at that point or whether Petone found an extra gear. All their forwards muscled up and were making huge metres, that is for sure.

“When the game went into overtime it definitely made the nerves come on a bit more!”

What about the last scrum of the match?

“We had a call to give it everything we have got. It came down to the No. 8 and he controlled that well. Everyone knew what to do then.

“In those do or die situations you always have a little bit left in the tank to give it that last push.”

This was OBU Green’s fourth straight Colts title. They have won the John E Kelly Cup ten times since 1986.

“The culture is big in our team. Being a university team, we get a lot of players that come in and go out every year. This side is a fairly new one, with lots of first year players.

“Getting those early team connections in through extracurricular activities makes a big difference on the field for teams like ours. When you are standing next to each other defending your line you have to dig deep together and that is where the benefits of that come in.”

Daniel himself is out of Lindisfarne College, where he was the head boy and first XV captain in this final year in 2018.

“I managed to get a sniff of the First XV when I was in the fifth form [year 11]. I only started rugby when I first went to Lindisfarne.

“I loved my last year. I had a whole bunch of mates I had been boarding with for five years and playing rugby with them was special.”

Daniel said effective leadership to him is a supported experience.

“It is not about who is in charge, it is about who is behind you and who is supporting you that makes a difference. It is the same with the rugby team, there is no way I could have made those tough decisions by myself without the others behind me.”

Daniel is in his last year of a Building Science and Project Management degree at Victoria.  He is uncertain about where he will be in 2022 but he will always be a part of OBU Green folklore after Saturday’s colossal triumph.