Skip to content
You are here
Home > Club Rugby > UPDATED: The Rugby Wrap 14 March (some news and information to start the week) 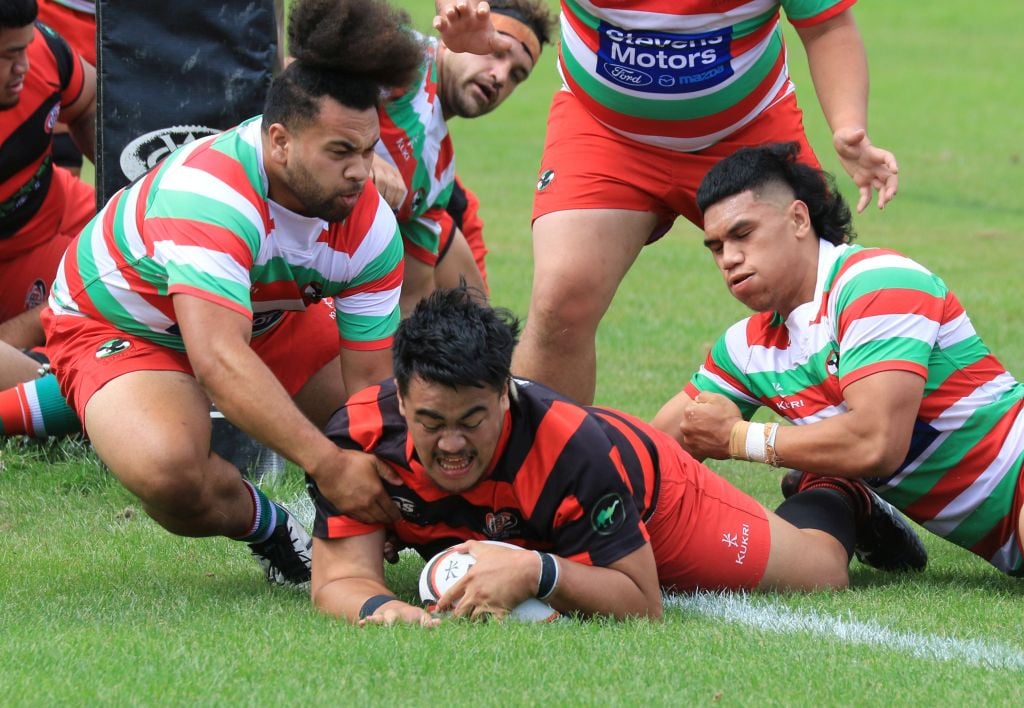 Formerly called Bond Banter – a news and information column to start the week in rugby from the ground up.

Evening EDITION: Tough times out there at the moment, but rugby is the answer.

The Hurricanes Poua (Women’s) team has been announced for their first Super Rugby match of the year, against the Chiefs on Tuesday afternoon in Hamilton.

An enlarged team of 25, so unsure if this constitutes a first-class match? No word in the media release of injured and unavailable players, but in this team there are just four Wellington Pride players and some 15 from the Manawatu.

Nine past or present Black Ferns in the Hurricanes Poua team. Halfback Iritana Hohaia toured with the Black Ferns in November (selected as a wing/fullback) but didn’t get on the field. Kaipo Olsen-Baker was a standout for the New Zealand Barbarians in 2020.

It’s awfully quiet out there in rugby Facebook and website land, with various club and provincial union social pages and websites as uneventful as they were in January.

Once more a swathe of cancellations this past Saturday, as Premier/Senior A teams in Wellington and Manawatu have a fortnight of preparations left before the *scheduled* start of their competitions on Saturday 2 April.

Poneke now have a jump on some other clubs who have yet to get off the mark for 2022, with two interclub pre-season fixtures under their hood. On Saturday the Poneke and Hutt Old Boys Marist squads met in a warm-up at neutral Mary Crowther Park, Wainuiomata.

In one other match that took place on Saturday involving a Wellington team, Avalon played Freyberg at Bill Brown Park in Palmerston North.

Conditions were warm and breezy and the ground rock-hard and the Wolves struggled. The Wolfpack is not lacking in size, with the Lafaele brothers, Chris at No. 8 and Neru at lock, offering considerable physicality to an already beefed up pack, but from the moment zippy Freyberg left wing Varcon King raced through to score the first of his at least three tries he was directly involved in they were under pressure. Freyberg also had their measure in the set-pieces, so were clearly the better balanced team on the day. Freyberg also fielded former Crusader Kahn Fotuali’i at fullback (wearing the 15 jersey anyway) who is knocking on 40 but still showing all his class. Neither squad was at full strength, with both having players out with Covid, including Freyberg’s new teenaged Hurricanes hooker Raymond Tuputupu. Freyberg won 8 tries to 1,

Plenty more pre-season club rugby ‘planned’ for this coming Saturday 19 March from Wellington to Manawatu and points in between, so we wait now with baited breath to see how much of it can goes ahead. More details on our channels later this week.

The Hurricanes men host the Chiefs

Update: The Hurricanes v Chiefs match at Sky Stadium in Wellington will now be played on Sunday 20 March at 3:35pm. The match was initially scheduled for Saturday 19 March at 7.05pm.

Nothing on their website or social media channels that we can see (see above about sparsely populated pages), but it is understood that Auckland Rugby has delayed the start of the rugby season for all Men’s senior grades until the 30th of April and Women starting 16th of April.

It is unclear how this will impact their competitions, with club competitions around New Zealand having to be done and dusted by the end of July to make way for the NPC. Either the NPC gets pushed back accordingly or community rugby ‘misses out’ (euphemism intended).

Update. And so it continues elsewhere. “Growing Covid-19 cases in the region forced the Taranaki Rugby Football Union (TRFU) to delay the start of the CMK club season. At a virtual meeting on Wednesday night between the TRFU and club chairs, it was decided to postpone the season until the beginning of May, a month after its original start date.TRFU community and operations manager Cole Brown says the postponement will allow rugby to operate without disruption and with less restriction and exclusion.” Read more HERE

Awful news out of Horowhenua-Kapiti with the sudden passing of leading referee Mike McNamara on Thursday afternoon. One of the more experienced whistleblowers around the country, McNamara refereed several Ramsbottom Cup finals amongst his just on 200 HKRFU Senior A matches, reaching that milestone late last season, was a regular fixture on the sideline of Horowhenua-Kapiti’s Heartland Championship home matches as an Assistant Referee, and had numerous representative matches to his credit. He’s being remembered as an excellent referee and an outstanding bloke who was passionate about his refereeing and generous with his time to help others.

Our thoughts are with his family and friends.

It was noted that New Zealand Rugby appealed to the government late last week appealing for dispensation from COVID-19 regulations which limit crowds considerably. With a healthy crowd on the bank at the Basin Reserve on Sunday for the women’s cricket international because they have permission to fill up 20 percent of their venue capacities and thus making a complete and utter mockery of their wider societal Covid rules and ‘Red’ settings, who can blame them?

Jeremy ‘Chopper’ Thrush takes the field for the second half for the Western Force against the Waratahs yesterday.

Thrush, who turns 37 next month, is one of the most experienced guys going around now. According to Wikipedia, he has played 32 matches for the Force, after making 110 appearances for the Hurricanes between 2008-15. This on top of 58 matches played in England for Gloucester, 87 for the Wellington Lions and 11 for the All Blacks. So that is unofficially 298 first-class matches for the former Hutt Old Boys Marist lock and Jubilee Cup winner.

Was it Ben O’Keeffe or Andrew Coster referring the Highlanders v Blues game on Friday night. It felt like it ran three weeks overtime.

Old Boys University’s Taine Plumtree scored his first two tries for the Blues and was the clear Player of the Match in their 32-20 win over the Highlanders. He didn’t feature in the appalling 11 minutes overtime though.

Do All Black honours beckon for Plumtree? The All Blacks haven’t had a tall blindside/lock with pace and skills since Liam Squire. Plus his dad’s one of the coaches!

Worst play of the season. The Highlanders throw a 30-metre cut out pass to 37-year-old lock Bryn Evans on the wing in their 20-32 loss to the Blues.

Ireland lead the Under 20 Six Nations with their fourth win in a row 42-27 over England. With a win in the next round they will secure a third grand slam. Italy had a resounding win over Scotland having earlier stunned England.

Charlie Ewels’ red card for England was the fastest in history happening after just 82 seconds of the Irish test. Cyril Brownlie was sent off after four minutes when the All Blacks beat England 17-11 in 1925.

Olympic, Commonwealth Games and World Cup winning sevens star Gayle Broughton is stepping away from the rugby field after achieving everything there is to achieve on the international sevens stage. Broughton has ended her contract with the Black Ferns Sevens and is moving to Australia to live with family.She made her debut in the black jersey in 2014. The Taranaki play-maker has scored 315 points in 112 World Series matches and has won every trophy on offer in the sevens game.

Here’s a rather bizarre volunteer job advertisement, as seen on the WRFU website:

In conjunction with Wellington Rugby Football Union the Hurricanes Club and NZ Rugby have an exciting opportunity for people who have a passion for talent identification in rugby. In this role, you will be working with high performing people and be responsible for:

To be successful in the role the ideal candidate will understand basic principles of identifying talent, connect well with a variety of people, have an open mind to learning, highly organized, and relentless in their detail and reporting.

This is an outstanding opportunity for candidates with the required experience, to add value to the Wellington Rugby Football Union the Hurricanes and Rugby in New Zealand.

Interesting, who is falling through the cracks?

Spain booked their place at Rugby World Cup 2023 with a 33-28 win against Portugal in Madrid on Sunday. Victory at Estadio Nacional Universidad ensures Spain will finish second in the combined Rugby Europe Championship 2021 and 2022 standings no matter the result of their final match against Georgia next Sunday. It caps a stunning turnaround for Los Leones, who began their RWC 2023 qualification campaign with three successive defeats at the start of last season’s Rugby Europe Championship. Santiago Santos’ side have since won six Championship matches in a row. Los Leones will end a 24-year wait for a second Rugby World Cup appearance when they make the short trip to France next year, where they will line up in Pool B alongside Webb Ellis Cup holders South Africa, Ireland, Scotland and the Asia / Pacific 1 qualifier.

One thought on “UPDATED: The Rugby Wrap 14 March (some news and information to start the week)”