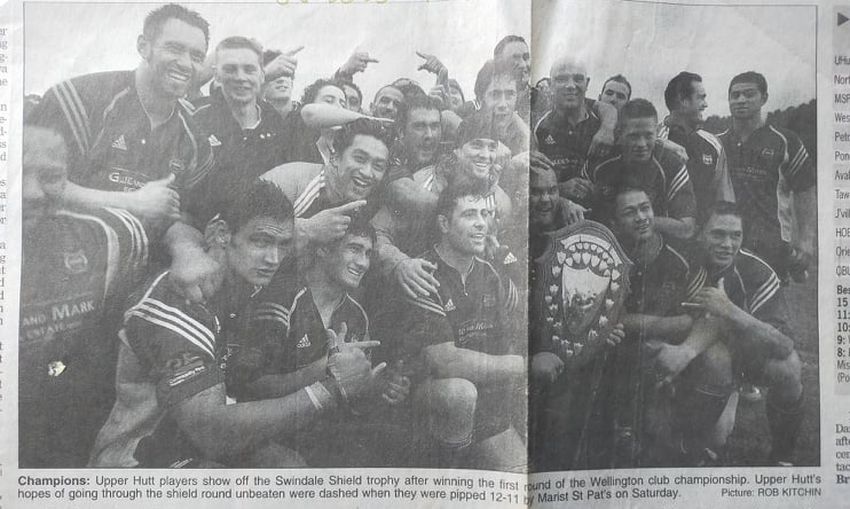 The first week in June is rich in history in Wellington club rugby. For many years there was the annual King’s Birthday/Queen’s Birthday round that saw draw-makers ensure blockbuster match-ups and big crowds and publicity. Since the late 1960s, early June has traditionally marked the end of the first round and the start of the championship round.

Below are selected happenings from this week, as taken from our ‘This Week in History’ file, mostly sourced from the Dominion, Evening Post and Rugby Weekly publications, which can be found in the National Library, and our own personal experience in recent years.

1968: In a major shock, University rout previously unbeaten Petone 15-6, while Hutt Old Boys make history by recording their first ever win in the Senior division, tipping over the more fancied Marist 18-14.

2013: It is Tawa on their own. In an entertaining game at home at Lyndhurst Park, Tawa draws their battle 29-29 with Marist St Pat’s but still win the campaign, earning the minimum of one bonus point they need from the match to seal the Wellington club rugby first round Swindale Shield outright for the first time in the club’s 66-year history. Scenes of jubilation follow (below).

1940: Johnsonville hit the lead in the championship, beating previous leaders Athletic 11-8 in the match of the round at Athletic Park. In a battle between the forwards orientated Johnsonville and the flashy back play of Athletic, Johnsonville come back from a 0-5 deficit at halftime. Athletic goes on to win the 1940 Jubilee Cup.

1986: The Swindale Shield is shaping as a two-horse race with three weeks remaining after frontrunners Wellington and Petone both flex their muscles today against Hardham Cup-bound opposition. Wellington scores 10 tries in beating University 52-10 and Petone run in eight tries, including a hat-trick to first five-eighth Murray Blandford, to beat Porirua 50-6. Petone has now scored 48 tries in 11 matches this year.

1933: A grandstand finish at the Hutt Rec! Hutt score the match-winning try on the stroke of fulltime to beat Athletic 18-17 in perfect rugby conditions. The Hutt team, who are wearing black armbands in respect to the recent passing of Alexander McBain, are troubled by the sun in the first half and scores are locked at 8-8 at halftime. Athletic gain a 17-14 lead late in the contest before Hutt wing Stevenson dives through to score in the corner and former Canterbury and now Wellington All Black and railway worker Herb Lilburne converts from the sideline to give Hutt the win.

1985: Wellington beats Petone 15-12 in today’s top-of-the-table Queen’s Birthday weekend clash to go to the top of the table. However, it could have been a draw after Petone fullback Allan Hewson’s late penalty is flagged as good by the two touch touches behind the poles but their decision is overruled and it’s no goal. Asked afterwards if his kick was successful Hewson said: “Yes. It went about three inches inside the right hand upright.”

1951: Poneke’s 14-3 King’s Birthday Monday defeat of eastern suburbs rivals and competition leaders Oriental sets up a tight points table, with three points separating the leading nine teams at this point of the competition! In bitterly cold conditions at Athletic Park, Poneke scores a decisive try early in the second spell when electric No. 8 Jim Grbich charges down a clearing kick and Vic Calcanai converts. Nineteen years after their first Jubilee Cup win in 1932, Poneke wins its second standalone title later this season.

1966: Defending champions Athletic are unbeaten through seven rounds but are upset today by University 11-3 in the match of the round. Athletic and University are now joint leaders, with Petone just a point back and breathing down their necks.

1977: All Black wing Stu Wilson is on fire for Wellington College Old Boys. With his side trailing Titahi Bay 7-11, Wilson intercepts a cross-kick and sprints 75 metres to score a spectacular solo effort, to see WCOB draw 11-11.

1937: Winter rugby hits Wellington. Heavy, sleety rain turns to a blanketing of snow that arrives early in the afternoon just in time for the leading matches of the afternoon. The feature match of this opening second round Jubilee Cup fixture is between the two undefeated teams of the first round, Athletic and Johnsonville. Athletic prevails in the conditions and wins 6-3, scoring the only try. It is a decisive result as they go to win their second successive title in several weeks’ time.

1965: University lead 14-0 after as many minutes and go on to beat Marist 20-8 in the biggest match of the season to date in front of 9,000 at Athletic Park. University fullback Mick Williment surpasses 100 points for the season in this match – just seven games into the season.

1982: The big cold hits Wellington club rugby hard today. Petone fullback Allan Hewson is treated for exposure at halftime in his side’s 4-3 win over MSP. Athletic captain Brian Cederwall discusses the possibility of calling their game with Wainuiomata off during the second half after two players from each side are forced from the field in need of respite from bitter cold.

2005: Upper Hutt win the Swindale Shield for the first time in 15 years. Upper Hutt’s nine tries to two 62-20 win over winless Old Boys University gives them the title outright with next week’s last round to spare after title rival Norths go down 5-12 to a Thomas Waldrom-inspired Avalon. The previous day Waldrom was in Suva playing for NZ Maori against Fiji.

1936: Competition leaders Poneke have their colours lowered by Petone, 13-10, a loss that is to spell the end of Poneke’s challenge this season. Instead, it is Athletic who come through several weeks later to win the Jubilee Cup.

1964: In an extraordinary match between Marist and Taita, Marist come back from a 3-11 deficit at halftime to lead 13-11 after halftime and then 40-11 late in the match. The final score is eventually 50-24 to Marist and 50 points have been scored in the second half (3-point tries).

1983: Upsets are the order of the day in Queen’s Birthday matches. WCOB wins at Petone, 19-15, for the first time in at least 20 years. Wellington’s chance of retaining the Swindale Shield takes a nosedive when they are defeated 15-18 by Upper Hutt, allowing MSP to go to the top of the table after they beat Johnsonville 21-10.

1998: Western Suburbs announce themselves as the team to beat in this year’s Jubilee Cup, clubbing Tawa 61-7. Wests, boosted by Filo Tiatia, score nine tries. Wests and Tawa will meet again in the Jubilee Cup final.

2004: Petone win the Swindale Shield outright, with first five-eighth Rikki Flutey orchestrating a bonus point 38-17 win over mid-table Avalon. Needing to score four tries to win outright, they are well on their way by halftime leading 21-3 with two tries. Flutey sets up the third and wing Willie Moala runs 65 metres for the fourth.

1954: The hardworking forward pack and the enigmatic play of All Black superstar Ron Jarden lay the foundation for University’s 21-3 Athletic Park win over keen rivals Hutt. University outscore Hutt by the margin of five tries to one penalty. This win helps make the race to the 1954 Jubilee Cup tight with University, Hutt, Poneke and Petone all tied up at the top of the table. University emerges from the pack however to claim its third successive championship win.

1986: Petone clinch the Swindale Shield with a round to spare, beating Upper Hutt 29-12, to give them 23 competition points from 12 outings (2 points for a win). Coach Andy Leslie praises his pack. “That was the best forward effort I’ve seen by a team in Wellington for some time,” he states afterwards.

2008: Marist St Pat’s beat Upper Hutt 41-0 in today’s last round to capture their 10th Swindale Shield title and their first since 2000. MSP have won 10 consecutive games on route to the first-round title, after dropping their season opener to Old Boys-University on Gala Day in Porirua. Young loose forward star Victor Vito holds the Shield aloft in celebration. MSP have conceded just 99 points in 11 games.

MSP with the 2008 Swindale Shield