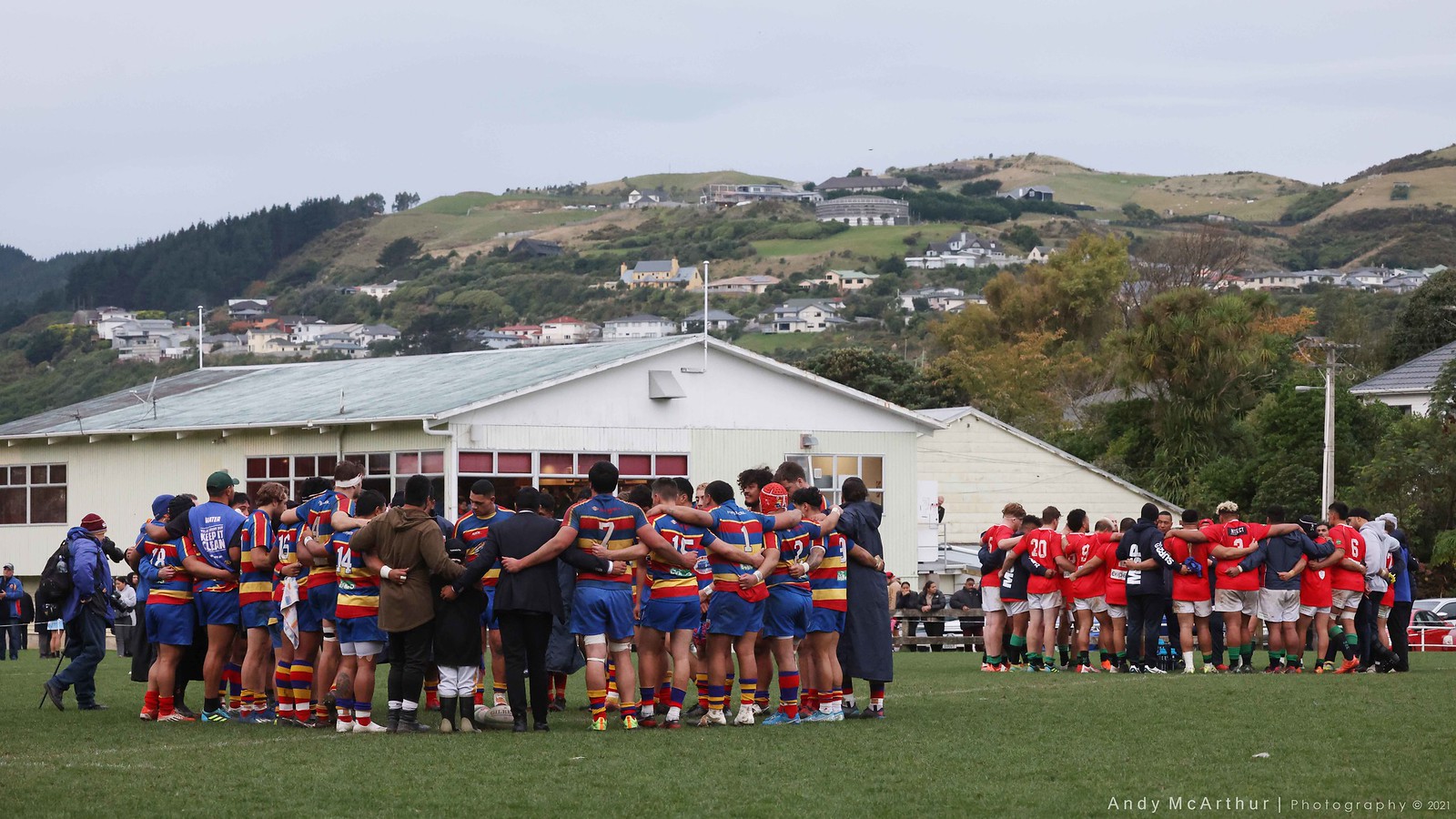 Winter rugby is almost upon us.

It threatened to get wintry on Saturday, but for the most part rain stayed away and it was still relatively mild. The Wellington Axemen won their first match of the year in the Premier grade, leaving just a handful of teams across all club rugby grades yet to taste success in 2021.

Can’t wait for Saturday?  Neither can we, so there are several mid-week school games to look forward to.

The second Beard Trophy fixture of the year is at Porirua Park on Wednesday at 5.45pm. This is between new holders Mana College and Bishop Viard College.

There are two Wellington Co-ed Cup qualifiers on Wednesday afternoon, both at 3.30pm. Hutt Valley High School hosts Aotea College and Scots College hosts Upper Hutt College. More on Scots College below. A third between Newlands and Porirua Colleges has been cancelled.

At 4.30pm on Wednesday there is a girls game between Mana College girls and Wellington Girl’s College.

St Pat’s Silverstream are playing New Plymouth Boys’ High School on Wednesday in their annual traditional fixture. This match is in New Plymouth.

At the Premier club rugby level, games at a glance are:

Eastbourne celebrates its 100th Anniversary this weekend with a match against Hutt Old Boys Marist U85kgs in the last round of the JC Bowl, where they will just need to win or draw to take the first round title ahead of Avalon who face third placed the Upper Hutt Rams in their clash.

As well as Akuila Alatini’s 150th Premier game, Avalon celebrated a number of players who received their club blazers on their Old Timers Day on Saturday. Many of those were from their current women’s team, bringing them in line with the rest of the region’s clubs.

One of those was Savannah Peniata, who also has a blazer from her time at Pare-Plim, and which got us thinking; are there any other active Women’s players with blazers from multiple clubs?

Speaking of Women and club blazers, Petone pair Hope Hakopa and Hope Sa’u earned theirs, both making their 50th appearances in their win over MSP on Saturday.

The province’s oldest club – Wellington – also celebrated their Old Timers’ Day on Saturday and their post-match also had several presentations. One of those was a club blazer to their most recent All Black, 12-Test player Vaea Fifita; while there were also presentations to a number of former Wellington representatives:

A couple of points of note in the college realm. Firstly, Wellington has lost one of its automatic entries into the end-of-season Hurricanes Boys Top 4, with that place now to be filled by one of the Hurricanes-region schools that compete in the Central North Island 1st XV competition. The change has been driven by new rules that require a school that wins its region’s Coed title two years in a row – as Feilding High and St Andrews have in recent years – to then compete in the Boys section the following year, and so an avenue for qualification was required for them.

The second is that Scots College has decided to use their new Coed status to enter that competition for 2021, foregoing any chance of playing in the Top 4 Boys section even if they defend their Premiership title.

Another unsavoury incident involving one of the region’s clubs, with Paremata-Plimmerton confirming that a serious assault took place outside their clubrooms late on their Old Timers Day last Saturday. The matter is now in the hands of the Police, but again calls into question the character of some who are involved in our game.

A welcome return to the sharp end of local rugby for Scott MacLean on Saturday. The well-regarded and popular veteran referee – and long-time Club Rugby contributor – took charge of the College Premiership match between Porirua and Rongotai just three weeks after finishing a six-month course of chemotherapy for Hodgkin’s Lymphoma, a form of blood cancer he was diagnosed with late last year.

The Old Boys University Green Colts got their second round John E Kelly Cup Colts defence off a shaky bonus point win over Tawa on Saturday. OBU scored the match-winner in injury time to win 32-25 – but what was interesting was that all five of their tries were scored off lineout drives!

Another grandstand finish in the Colts match at the Hutt Rec, where Ories beat HOBM 32-29 with a last-gasp 50 metre runaway try. Ories beat the Junior Eagles in the first round in similar circumstances.

One long-serving player ended his career over the past week, with Pare-Plim hooker Stu Simonsen retiring. It wasn’t quite how he anticipated going out, but after tearing his bicep against Poneke last Saturday he’s decided to call time. Simonsen moved north to Ngati Toa after a standout career with OBU, where played over 100 Premier games and won two Jubilee Cups, starting both the 2015 and 2017 wins over MSP and HOBM respectively.

A solid contingent of players with Wellington ties in the Manu Samoa squad for their upcoming matches against the Maori All Blacks and their RWC qualifier against Tonga. HOBM’s Tomasi Alosio and Avalon’s Teofilo Paulo are the only current Wellington-based players named, but others include Henry Stowers (Wainuiomata), Jack Lam (Ories), Losi Filipo (Petone/Norths), Tietie Tuimauga (Jville/MSP), and TJ Ioane (OBU).

Congratulations to Thamsyn Newton (Paremata-Plimmerton) for being offered a White Ferns cricket contract for the 2021/22 season.

Congratulations for Daniel Schuster in the BoP for playing his 400th Senior match on Saturday, and for Turoia Kuka for raising the double ton in the same game for Te Puna:

The Collegiate Rugby Club’s senior team delivered a performance on Saturday fitting of a special occasion.

Should sport and politics mix?

Ories netball have seven teams and all seven won their games on Saturday. Five teams are winning their grade, one is second to another Ories team and the other is also second. Most of the players are wives, girlfriends, sisters or daughters of the rugby players!

There’s been an absence of matches played on the region’s artificial turfs so far this year, though that’s probably been more of a problem for schedulers rather than players. But there’s a reason for that, as Club Rugby understands that the necessary certification needed by World Rugby for both the Te Whaea and the St Pats College turfs – the two most heavily used by rugby – have been allowed to lapse by Wellington City Council and are currently off-limits. Its understood that the situation is being addressed, but it shouldn’t have reached this point.

In Manawatu club rugby, leaders Feilding Yellows took down rivals Feilding Old Boys Oroua 85-5 at their match at Kimbolton on Saturday. Second five Josiah Maraku (4) and No. 8 Sam Wasley (2) were amongst the try-scorers.

In Manawatu Women’s rugby, Kia Toa won a three-peat of titles, beating Feilding Old Boys-Ōroua 46-12 in the Prue Christie Cup final. A Manawatu Cyclones squad was also named and they start their six-week preparations for the Women’s NPC that starts on 18 July.

In Hawke’s Bay club rugby on Saturday, former MSP wing Mike Buckley scored four tries for Napier Old Boys Marist against Napier Technical. He is the joint leading try-scorer in the competition with 10 tries. Elsewhere, the Napier Pirate club is walking the plank. They were relegated from the Premier division to Division 1 for the second round and on Saturday lost to Aotea to sit fifth on the standings. Havelock North were also relegated but they lead the second tier grade standings.

While they’re a professional team whose first obligation is to win, would it have really hurt for the Hurricanes to find space in their 23 for all six of their Hawke’s Bay players for Friday night’s game against the Force at McLean Park?

Second, it would also have helped (and in all games) if there was some explanation as to why some players aren’t playing. Devan Flanders on Friday, for example.

And why did the Hurricanes wear their ‘away’ strip for a home game in Napier? Does away mean anywhere but Wellington?

Richie Mo’unga and Suliasi Vunivalu with 4 tries each are the top try scorers in Super Rugby. Lachlan Boshier is the top tackler with 52. Darcy Swan of the Brumbies has won 24 lineouts and Salesi Rayasi has the most metres carried with 329. Julian Savea has made nine clean breaks, although he didn’t play this past weekend.

Former Wallaby Ben Darwin is one of the most interesting men in sport. Check out his website: http://www.gainline.biz/