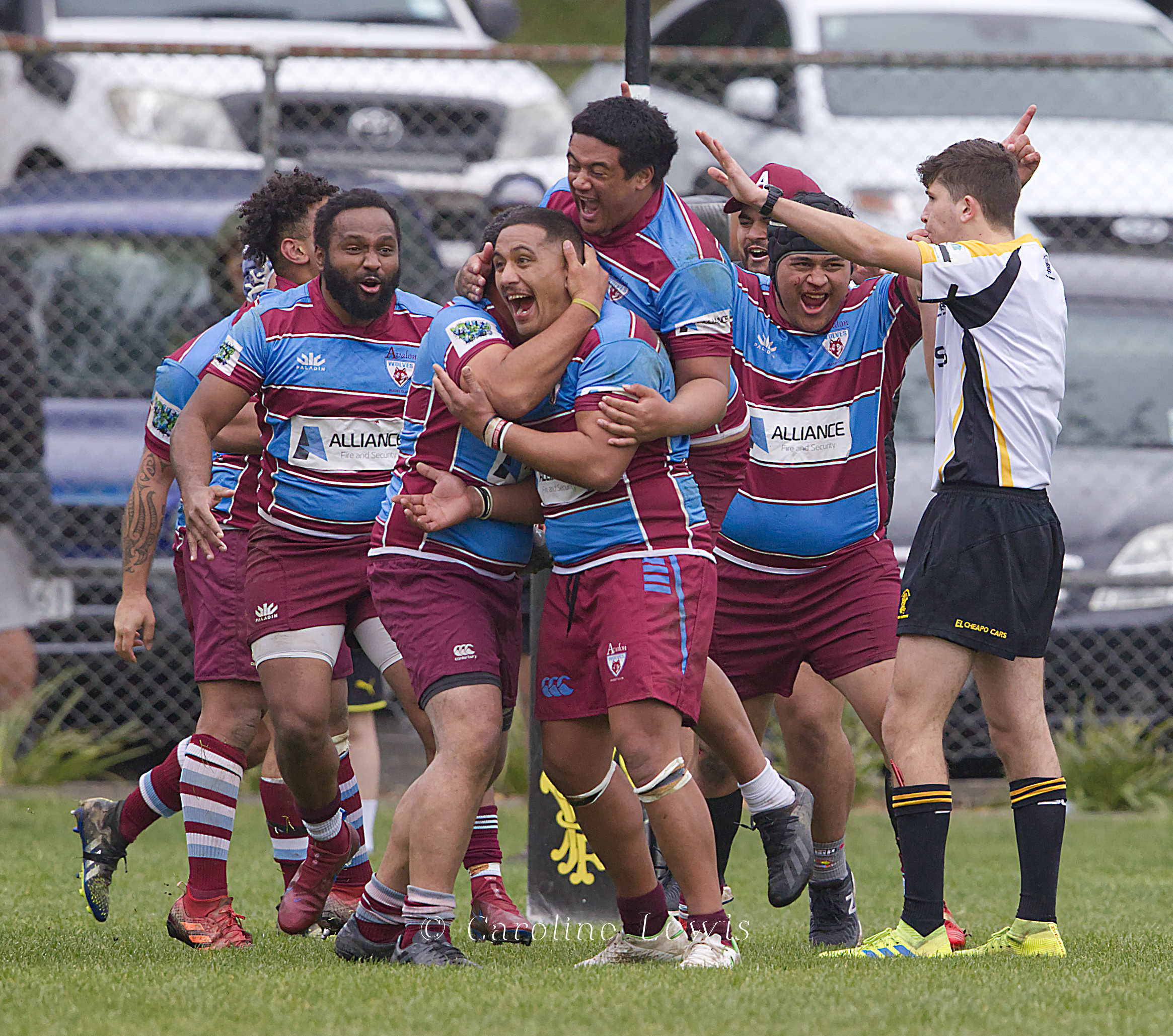 UPDATED SUNDAY: The curtain came down on the 2021 club rugby competition season this afternoon, with the final two titles decided with wins for the Avalon and Old Boys University clubs.

At Te Whaea, the OBU Pink Ginners defeated the MSP Internationals 26-5 in the Reserve Grade Division 2 final for the Alan Seerup Cup.

There were two National Knockout Cup U85 matches today, with the Bond Bar Poneke Wanderers advancing to the next round with a 49-26 win over last year’s finalists Eastbourne at the Hutt Rec. The Bond Bar Poneke flew to a 40-0 hafltime lead and extended this to 49-0, before Eastbourne came back to close up the margin with a burst of late scoring of their own.

The Bond Bar Poneke play a northern contender in the next round.

The other match at Kelburn Park saw the Upper Hutt Rams beat the OBU Scallywags. The Rams play the winner of today’s South Island match between the Carisbrook Bushpigs and the Lincoln Eels.

There were three representative matches this afternoon in contests involving Hurricanes Heartland squads ahead of their competition starting next weekend.

At Porirua Park, the Wellington Centurions beat the Whanganui Butcher Boys 19-12, coming back from a 12-5 halftime deficit.

At Masterton, Wairarapa-Bush beat the Wellington Samoans 34-20, after leading 22-6 at halftime

At Levin, the Wellington Maori side came from behind to beat Horowhenua-Kapiti 38-33.

In windy conditions, Wellington Maori found themselves on the backfoot early against Horowhenua-Kapiti. The home side scored two early tries, including a 70 metre runaway, and went to a 21-0 lead.

The Maori went to work grinding down the big Horowhenua-Kapiti pack and scored two forwards tries to Newess Fotuaili, both converted by halfback Kemara Hauiti Parapara.

Just before halftime the Maori conceded another try and Horowhenua-Kapiti led 28-14 at halftime.

Coach Wilson must of said something at halftime because the Maori team came out of the blocks firing, playing territory and placing huge amounts of pressure. They scored from a great kick-pass from Pakai Turia to Andy Ellis, with Ellis going in untouched.

Horowhenua-Kapiti worked their way up field and their forwards crashed over to extend their lead to 33-21 with 20 minutes to go.

Multiple phases on attack saw Tajun Misa- Crosland, with Hauiti Parapara converting. It was now 33-28 with 15 minutes to play.

Next Turia threw a lovely skip pass that found replacement winger Khya Wilson who flew in from 30 metres out to score what was thought to be the winning try. Hauiti Parapara kicked the conversion to put the Maori up 35-33.

With time seemingly up, Hauiti-Parapara added to his points haul with a penalty, to seal the win.

As well as Hauiti-Parapara, this win involved some outstanding work from Taine Tata, Newess Fotuaili and Whetu Henry.

The Wellington U19s are in action on Sunday in a game of three halves against their Tasman and Cantebury.

St Pat’s Silverstream beat Wellington College 33-3 in their second versus third semi-final at Hataitai Park this afternoon. Silverstream will play top qualifier Scots College, who pulled away in the second half to beat St Town 34-17 in the other semi-final.

If ever there was a moment to promptly banish bad memories it was the penalty goal kicked by Emmanuel Solomona to win the Premiership semi-final for St Patrick’s College, Silverstream 33-32 against Wellington College.

Down 32-30, Solomona missed touch from a penalty kick and then dropped the ball in the next phase, near halfway, as his confidence became incompetence.

Scrum. Wellington College possession. The black and gold pack screws. A loose pass skids across the greasy surface. It’s harder to handle than slippery Palmolive in the shower. Wellington’s featherweight wing collapsed over the ball like the rare soul who actually listens to every earthquake safety drill.

Dangerous debris piles in, Silverstream’s forwards want it, need it. The winger tries to funnel it out. Hopeless! He’s trapped. Escaping this furnace is like getting out of the Củ Chi tunnels. Penalty for Silverstream. Oh God a grumpy Catholic grumbles on the embankment at Hataitai Park. Mr Error!  Solomona steps forward to take the shot to win the game. Tree trunk legs combined with finesse distance and accuracy sees a prayer answered. From 35-meters out, ten-meters in from touch, his left to right strike never looked like missing.

Silverstream has only missed one final from their last dozen semis, but this one had even St Patrick himself resigned.

Wellington, accompanied by a rowdy cohort of supporters, stretching from one goal line to the 22, were ahead 32-23. Giddy!

Silverstream led 17-10 at halftime but much like the traditional, Wellington seized control after the break. Brutish winger Josh Williams was denied a try and then scored one reducing Silverstream defenders to ten-pins like those at the bowling alley in the foreground.

No.8 Ashton Teau was similarly destructive. His abrasive tackling was a knockout but his sudden 25-metre burst, following a change of direction from a retreating scrum, was a complete surprise, Wellington 32-23.

Wellington fullback Jacob Waikari-Jones scored his teams’ first 20 points. The most experienced player in the roster commanded attention with his educated right boot, mature judgment, and opportunism on the flanks. He scored two tries and matched that tally in penalties and conversions. Hang on. This is all about Col?

Their halftime ascendency was most worthy. Centre Tony Solomona scored two early tries with his overbearing footwork and power. He was soon reduced to a spectator as Wellington restricted his supply both legally and illegally, but the industry of his pack put him in good positions.

Two years ago first five Tom Mannix broke his neck and was unlikely to participate again. A jinking run and try to put the exclamation mark on a good first spell by Silverstream. Two 30-meter penalties in the second-half ensured a fading candle still flickered.

No.8 Toby Crosby never stops. Graft comes more naturally than subtly. It was his direct muscle and try that made it 32-30 contrary to every prevailing force.

Did I mention kickoff was delayed 15 minutes following a serious car crash and the venue was changed on Friday after water pipes exploded next door to the Governor General’s house. A prominent Level 1 referee left the commentary box at halftime to go to the law ball. Try writing laws for this game.

Down on the flat, Scots College booked their place in next weekend’s Premiership final with a 34-17 win over St Pat’s Town at home, in a semi-final that wasn’t quite as wild as the first one but had several twists and turns.

Scots came from back 17-10 at halftime, scoring four second half tries and 24 unanswered points. But their win was far from convincing, as Town were all over them from about the middle of the first half through to early in the second spell.

Town had scored two thrilling back-to-back tries in the latter stages of the first half, to blindside flanker Jordan Chapman and tighthead prop Siale Lauaki, the latter running through a gaping hole from a ruck from 20 metres out to score under the posts.

First five and captain Cam Burgess added the extras, and just before half time Burgess himself went close to scoring another try from a dart inside the 22 but Scots made a try-saving one-one-one tackle and hung on.

Town’s momentum continued after the oranges, lock Darius Luki receiving a pass from his locking partner Ben Higgs and almost crossing the try line after a long sequence of play in possession. He was cut down by chasing Scots wing Eric Lawson, but the final pass was forward and the movement was halted.

Town also had the advantage of the wind in the second half that was pressing into the southeast corner of the ground.

Scots regrouped and hit back with their third try after forcing a turnover inside Town’s 22 and attacking with a scrum. No. 8 Cody Lokotui crossed the line for his second try, after earlier scoring the first try of the match. Second five Ieti Campbell kicked the conversion and it was 17-17.

The remainder of the match became a tale of two loose forwards.

With the game still one edge, Town suffered a big blow when earlier blindside flanker try-scorer Chapman was red-carded for a misdemeanour in a ruck with his side on attack. This proved a catalyst for Scots who soon went ahead 24-17 with the game’s decisive try. Campbell made a ghosting run through traffic from his own side of half way up into the 22 and found halfback Muri Stewart on his inside who raced through to score to the delirium of his team’s supporters on the bank.

Scots No 8 Lokotui was then the benefactor of what amounted to the match-winning try, scoring in the corner for his team and himself coming up with his hat-trick.

With the result seemingly safe for Scots, the weather turned and torrential rain started falling. But it didn’t dampen Scots tighthead prop Samu Moli who scored the final try of the afternoon to seal the win.

The conditions for the final try of the afternoon were in stark contrast to the first which had seen Scots No. 8 Lokotui score from a lineout in the far corner in a forwards drive in bright sunshine and breezy conditions. Burgess had replied with a penalty for Town, making it 5-3 early. Lock Maea Tema-Schmidt  scored after another lineout in the corner but Campbell missing both first two conversions and an early penalty in front didn’t have a bearing on the final outcome.

In another nearby First XV game this afternoon, home school Rongotai College beat Rob Law Max St Bernard’s College in the fifth versus sixth decider in fine but windy conditions. Rongotai ran out 31-24 winners after leading 12-5 at halftime. Rongotai made far better use of possession, finishing off most their chances, whereas Rob Law Max St Bernard’s made too many errors on attack and didn’t play their best rugby until the last 10 minutes when they came back from 31-12 down to score two of their four tries.

In Premier 2, Upper Hutt College beat Bishop Viard College in one semi-final and the St Pat’s Silverstream second XV drew with Wairarapa College 24-24. Next week’s Premier 2 final is between Upper Hutt College and the Silverstream second XV, who qualify ahead of Wairarapa because they were the highest ranked team going into the semis. Tawa College beat the Wellington College second XV 19-17 in the fifth v sixth fixture.

Club and college players to need vaccination certificate in 2022