Skip to content
You are here
Home > Club Rugby > Eagles edge OBU with last minute try to stay in the hunt, as MSP take the lead 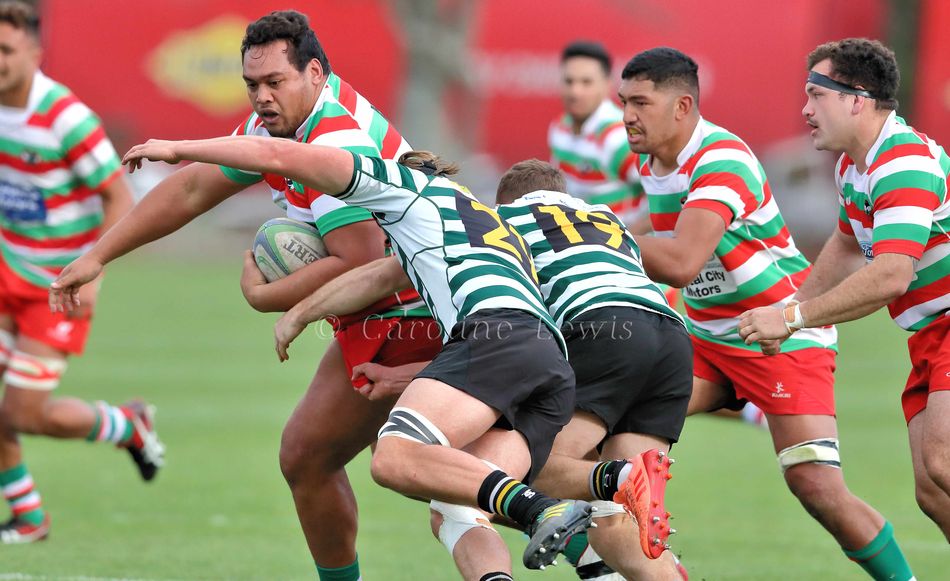 The HOBM Eagles got up to beat the Old Boys University Goats with a last-gasp converted try today at the Hutt Rec to keep their hopes alive for a top four berth and a shot at the Jubilee Cup.

HOBM’s Wellington Lions halfback Connor Collins darted at the line to score after a late surge and multiple phases and second five-eighth Brandyn Laursen added the extras to give the Eagles a 21-17 win.

The win keeps them in touch with the top four with two rounds to play, while OBU have been leapfrogged into third place by Marist St Pat’s and Northern United, who both won well in eastern suburbs battles.

At Evans Bay Park, MSP leapt to a 22-0 lead after 15 minutes and also had their four-try bonus point secured. Second five-eighth Isaia Petelo scored two of these tries. They more than doubled this to 46-0 at halftime and skipped clear. With encounters with lower ranked Johnsonville and Wellington to come, MSP have a grasp on the first round spoils.

Northern United beat Oriental-Rongotai 38-14 in a Polo Ground meeting for the To’omaga Alex Iona Memorial Cup to slide into second, a point back from MSP.

Tawa were also the day’s other big winners as far as the race for the top four and a seat at the Jubilee Cup table goes, holding on by the skin of their teeth at the end to beat Petone 31-26 at the Petone Rec.

With two weeks to play in the Swindale Shield, there are six teams all still in with mathematical chances of winning the first round title and gunning for semi-final positions, from leaders MSP on 45 down to HOBM on 36.

At Fraser Park, Johnsonville broke their long-standing duck, beating the Avalon Wolves 38-12 in the battle of the minnows.

In some match-by-match round-ups, it was the OBU Goats who struck to score the game’s first try at the Hutt Rec through Hurricanes centre Wes Goosen after a break from halfway and some typical robust running from Goosen, who pulled up clutching his leg and left the field shortly after.

The Eagles built phases inside the 22 and hit back through hulking prop Rei Manaia and then doubled their lead to 14-5 at halftime when second five Brandyn Laursen burst on to a Manaia pass, skipped a tackle and threaded his way to the paint.

With the wind in the second half, OBU finally mounted a strong period of attack after almost 20 minutes and left wing Ty Poe scored in the corner second phase off an attacking scrum.

A concerted build-up lead to first five Callum Harkin scoring with several minutes to play to take a 17-14 lead. The Eagles kept pressing and Collins scored at the end after a strong build-up and a short break up towards the chalk by replacement wing Fereti Soloa.

Down the road at the Petone Rec, the home side’s halfback Logan Henry kicked two early penalties to put them up 6-0 into the wind.

Visitors Tawa struck for the first try when centre Tom Maiava got on the outside of his markers and offloaded to right wing Romu Senileba.

Petone regained the lead with their second try to Tom Carter after a dash up the far sideline by fullback Ben Brooking, but Tawa first five Trent Renata clawed three points back and kicked a penalty to see Petone lead 11-10.

Tawa then struck with two decisive tries before halftime to take a 25-11 lead into the turnaround, the first scored in the same grandstand corner as Senileba’s despite a possible knock-on in the build-up and the second an intercept on the far side in general play and runaway.

Playing into the wind, Renata extended his side’s lead to 28-11 with a penalty, and Petone’s Logan Henry got one back to make it 28-14. Petone prop Pasi Uluilakepa barged over from close range to make it 28-19, before another Renata penalty made it 31-19 to Tawa.

Petone set pulses racing with just over 5 minutes to play when replacement Cam Ferreira passed inside to centre Willie Fine who scored to make it 31-26.

Tawa attacked Petone’s line to no avail, before Petone did likewise. Blockbusting lock Iona Apineru appeared to go close to scoring, but referee Gordon ruled held up and the game was over.

At the Polo Ground, Ories made a bright start, but Norths withstood early pressure and wing Connor Garden-Bachop linked with second five-eighth Kienan Higgins to score the game’s opening try.

Norths’ Hurricanes first five-eighth Jackson Garden-Bachop pounced on a dropped ball and went through to score under the posts to put them ahead 12-0.

Ories wing Saia Paese broke out from under his posts, leading to a try to Ories to fullback Tuga Mativa, but Norths lock Waylon Baker finished off a strong team try to put them up 19-7 at halftime.

No. 8 Luca Rees scored a fifth try for Norths, against his old team, while Ories centre Ethan Webster-Nonu scored a second try for his side.

At Maidstone Park, Wainuiomata made a fast try with early tries to first five-eighth TJ Va’a and No. 8 Teru Time giving them a 12-0 lead inside 10 minutes of play.

Prop Anthony Mamea crossed for a third consecutive try to put them up 19-0 inside half an hour of play, before the Rams got on the board with their opening score. Wainuiomata fullback Josh Robertson-Weepu slotted a penalty to put them up 22-7 at halftime.

The green and blacks scored their fourth and bonus point try immediately after the turnaround, when evergreen replacement back John Monu crossed and Robertson-Weepu converted to put them up 29-7.

The Rams fought on gamely and scored two more tries to close the gap to 10 points by the close of the match.

In a top-of-the-table battle of the unbeaten teams in the Reserve Grade Mike Copeland Trophy, Ories beat the Upper Hutt Rams J8s 15-12.

Close results were the order of the day in the Premier Reserve Harper Lock Shield competition.

The Petone Premier Reserves pipped their Tawa counterparts on the bell, with halfback Blake Ford kicking a penalty with the last play of the game to see them prevail 25-24.

Petone sailed home in the second half with the wind at their backs, scoring two tries and then the penalty over the final quarter after Tawa had taken a 24-12 lead into halftime courtesy of an intercept and 70 metre runaway try just before the break.

Saturday’s U85kg results were all to be confirmed at the time of publishing.

OBU Green had the bye today and lead the standings by seven points to second placed Norths Blue, third placed Petone and three teams locked up in fourth.

Scots dominated the first half but could only lead 10-3, No. 8 Sione Halalilo . Town midfielder Sapati Tagoai sliced clean through the middle to score early in the second half to level the scores up to 10-10. Scots regrouped and prop Jonty Bird scored in his 50th match for the side to give them victory.

St Pat’s Silverstream have taken a one-point lead at the top of the standings ahead of Scots after their bonus point 66-0 win over Rongotai College.