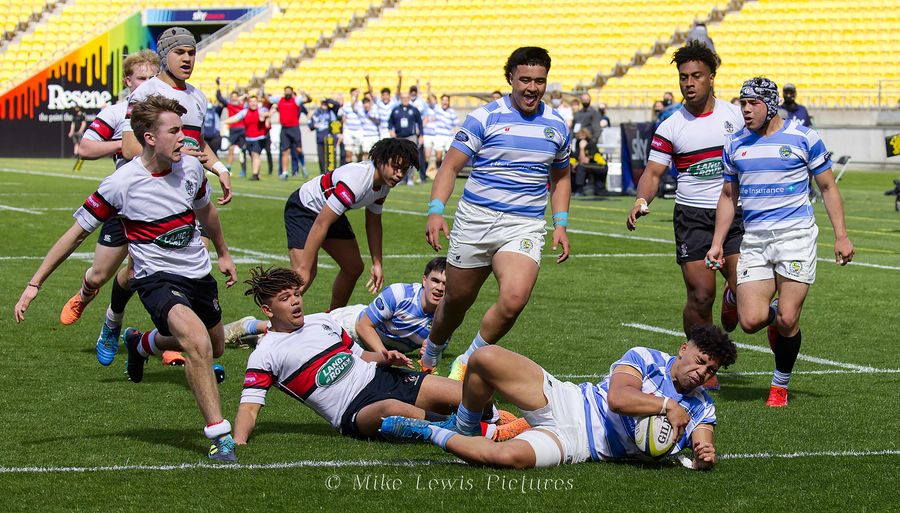 A bemused atmosphere reigned at the conclusion of the Premiership Wellington final at Wellington Stadium on Sunday. St Patrick’s College Silverstream and Scots College shared a 36-36 draw in a breathless spectacle highlighted by outrageous twists in momentum.

Officially the title was shared but had a National Top Four qualifying fixture followed Scots would have assumed a higher seeding based on their round-robin victory.

With three minutes remaining, Silverstream was down 36-24 having conceded 29 unanswered points. Silverstream salvaged a turnover inside Scots 22 and following a string of penalties No.8 Toby Crosby tapped quickly and crashed over under the sticks to make it 36-29. Emmanuel Solomona casually lined up the conversion from five meters out and was inexplicably charged down by Scots lock Maea Tema-Schmidt. Two-metre Tema producing Go-Go Gagdet arms from his pockets!

The siren sounded as Scots made the last kick-off. Silverstream bludgeoned through Scots defence down the western sideline and replacement lock Brandyon Soi produced his own acrobatics lunging over a pile of strewn bodies and slam dunking the ball over the whitewash. First-five Tom Mannix, just returned from the sinbin, chipped the conversion sweetly down the middle from 15-metres in 25-metres out as an improbable draw was the unlikely outcome.

The first 15 minutes was a Silverstream stampede. It was 19-0 and had it not been for some desperate scramble from Caleb Koeberg it could have been even worse for Scots. The fullback essentially saved two tries with a combination of jersey pulls and ankle taps.

Crosby will be a sought after talent in senior rugby next year. The lad they call Protein was all muscle and pace with his first carry, cannoning through Scots wall and scoring from halfway.

Silverstream was finding holes at will as Scots rear touches resulted in fumbles. Loosehead Senio Sanele and blindside Connor Tuifao profited off turnovers as Scots was reduced to disarray.

Tema-Schmidt has matured into an imposing leader to match his physical presence. He barged over from close range to make it 19-7, but slippery Silverstream centre Tony Solomona exposed the right side of Scots defense as the Catholics turned 24-7 ahead.

A demise in discipline by Silverstream coupled with the introduction of mammoth prop Valentine Parker and the educated right boot of Ietitaia Campbell turned the pendulum Scots way. Their locomotive lineout steamed into action with Team-Schmidt nabbing a second and hooker Manu Latu following suit from mauls.

Campbell would propel Scots 26-24 ahead when Silverstream expecting another lineout drive were instead caught napping by a prompt tap.

Scots was now rampant with loose forwards Aidan Christians and Cody Lokotui growing in stature. Koeberg was next to score, Scots employing rare width as the score became 31-24.

A rolling maul that traversed 40-metres was soul destroying for Silverstream. The only way it could be stopped legally was by a traffic warden. Rupeni Mataele would have fended off Anthony Joshua the way he was running. The ball found the Fijian flyer open side and like a whippet he surged 30-metres clear.

How did Silverstream recover from a 36-24 deficit?  Kobergh’s yellow card for a deliberate knock down helped but temperamental is the word best used to surmise this group. The gap between their best and worst could separate continents, but in the dying vestiges their character was extraordinary.  Captain Sam Morgan was a Trojan. Sanele is a candidate for skipper in 2022

Scots matched the Wellington College First XV of 2006 by winning three consecutive titles. Wellington won a further three from 2007 to 2009 and with the vast majority of a beefy pack back Scots future is bright.

The game was refereed with poise and empathy by Ethan Loveridge and assistants Daniel Mangin and John Ballingall.