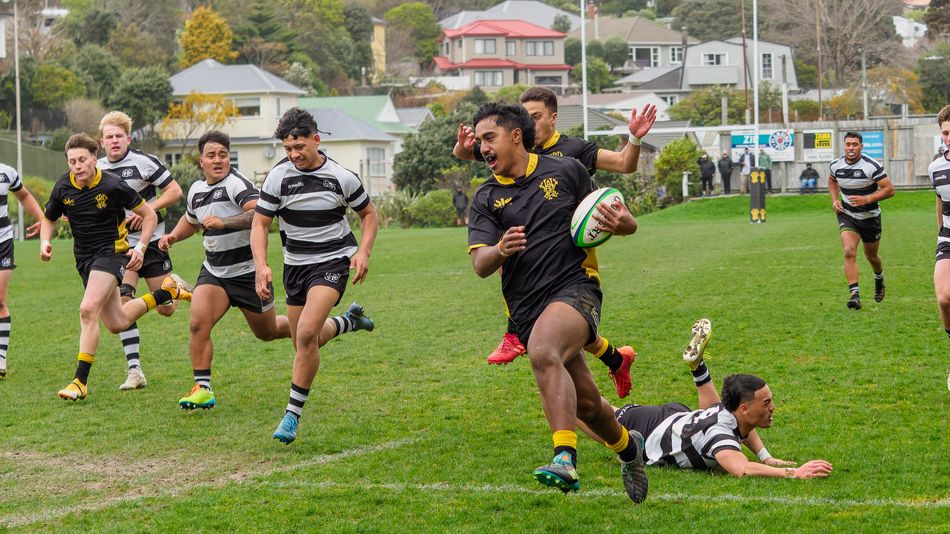 Centre Sapati Tagoai racing away to score one of his two tries for the Wellington U19s against the Hawke’s Bay U19s. PHOTO: Stewart Baird.

Updated: There were five college rugby finals played today in Wellington and two were decided by a point.

St Pat’s Silverstream teams won both these close matches, their Second XV beating the Upper Hutt College First XV 13-12 to win the Premier 2 Murray Jensen Cup and their U15 side beating the St Pat’s Town U15s 25-24 to win the Father Gus Hill Cup.

The Premiership final between Scots College and St Pat’s Silverstream is being played on Sunday.

The Wellington Centurions Men’s team beat the Taranaki Trojans 33-26 in their match at Sanders Park in New Plymouth.

The Wellington U19s beat the Hawkes Bay U19s 42-7 at a windy Lyndhurst Park in their second round Central Region Shield Hurricanes U19s fixture.

The Wellington U19s led 14-7 at half time with the wind in their favour and pulled clear in the second half for a convincing six tries to one victory.

The Wellington U19s will meet the Manawatu U19s in the decider of this competition when they meet in Wellington next weekend, after Manawatu defeated the Hurricanes Heartland U20s 61-8 in Palmerston North today. Manawatu led 21-3 and ran in nine tries.

The first half between Wellington and Hawke’s Bay was largely a stop-start affair, with lots of errors and penalties against both sides.

Wellington scored their first try after five minutes with a penalty and lineout in the corner, leading to some good phase play by the forwards, and blindside flanker Dom Ropeti darting over over between the posts with openside Sione Halalilo and halfback George Sims in close support.

Wellington made an error from the re-start and Hawkes Bay dominated territory and possession for the next 10 minutes. They finally scored what was to be their only try of the match after a penalty and lineout in Wellington’s 22, some good driving play by the forwards and loosehead prop Troy McIvor coming up with the score. This made it 7-7.

Wellington would score one more try in the first half, a period of pressure inside the 22 leading to an attacking scrum and OBU flanker Dom Ropeti scoring his second try after a few phases from close range.

Wellington started the second half in positive vein with a break by the backs cut down in the corner. They weren’t to be denied soon after, when centre Sapati Tagoai cut through from near halfway to score Wellington’s third try in the sane corner. Fullback TJ Clark slotted the sideline conversion. He would kick all six conversions for the Junior Lions.

Moments later, Wellington pulled back on to attack and after a 90 second build-up, Johnsonville right wing Knox Tuinasau scored in the opposite corner in front of the clubrooms to make it 28-7.

Like last week against the Hurricanes Heartland U20 side, Wellington’s reserve bench proved too strong for the opposition. Wellington’s fresh legs such as reserve halfback Logan Love and reserve loosies Rory Woods and Weston Sao (both coming back from injury) all continued the momentum.

Wellington scored twice more before fulltime, the first through a second try to Tagoai chasing up a stab kick behind the Magpies’ line by first five Luke Warmsley, and the second scored by the forwards in the corner following a series of penalties and scrums.

There was no further scoring in the final 10 minutes as the game wound to its inevitable conclusion.

For Hawkes Bay, second five and captain Andrew Hayward played well, and their scrum was honest, but they lacked any X factor against the Wellington side with several players having Premier club rugby experience in Wellington this year.

A short distance away at Porirua Park, Wellington Māori put their season back on track with a resounding though if at times unconvincing 55-14 with over their Taranaki brethren.

Playing into the northerly, Te Upoko set the tone from the opening scrum with skipper Whetu Henry demolishing the opposing pack. The opener came after 10 minutes when a break down the left was finished by fullback Luke Kapene from close range, with the second following soon after.

Taine Tata broke down the right and after some excellent interplay with Adam Clark and Justin Wilson it was Clark that doubled the lead.

Tata, Ethan Robinson-Mate, and Henry relished having the ball in hand, with the Ories club legend seeing more open pasture than he will have in years.

Things got worse for the visitors as they lost veteran fullback Rick McKenna and halfback Santana Marshall to injury in quick succession, but they rolled their sleeves up and defended stoutly before grabbing the lead with two tries in the space of three minutes. Both came from close order, the second following a long break off the back of the scrum by impressive No.8 Hemopo Cunningham and they took a 14-10 lead into the break.

The second half however was one-way traffic as Te Upoko dominated possession and territory with a tactical change to bring on Josh Robertson-Weepu and allow Kemara Hauiti-Parapara to move into halfback paying dividends.

The second half however was one-way traffic as Te Upoko dominated possession and territory with a tactical change to bring on Josh Robertson-Weepu and allow Kemara Hauiti-Parapara to move into halfback paying dividends. Replacement Andy Ellis was the first to cross after some excellent work by Robinson-Mate and Hemi Fermanis, before Newress Fotuali’i and Fermanis got on the scoresheet, the latter after a gorgeous chip kick from his Tawa teammate Hauiti-Parapara. Kapene would add his second after scooping up a dropped ball, Willie Rua poached an intercept, and Api McMillan-Parata would close matters with Te Upoko’s ninth try of the afternoon.

There were a number of standouts for Te Upoko with locks Tata and Fermanis to the fore, but Robinson-Mate was particularly impressive on his home ground and especially with ball in hand in space.

The Wellington Centurions U18s beat the Wairarapa-Bush U18s 33-0 in the second of two matches at Lyndhurst Park.

The match was called off a couple of minutes early due to what looked like a serious neck injury to Centurions captain and No. 8 John Samuelu. We wish him all the best and hope that it’s not too serious.

Samuelu had led from the front for his team with a busy performance on attack and defence, and had scored two tries, the second of which was a rampaging run from close range early in the second half that dented Wairarapa-Bush’s hopes. Following that try, the Centurions scored twice more with the wind in their favour to win comfortably on the scoreboard at least.

Wairarapa-Bush were unlucky not to at least have got a consolation try at the end when hot on attack but for Samuelu’s injury.

Wairarapa-Bush, led by their industrious blindside flanker from Rathkeale College, Leon Tuiloma, were plucky opposition throughout, and they were especially effective at disrupting the Centurions’ breakdown and they won several turnovers and penalties in this area.

The Centurions were also guilty of some inaccurate play and threw their fair share of forced passes that went awry.

The Centurions started the game with promise, Rongotai College lock Matolu Petaia winning a lineout steal in good position, and himself finishing off the first try of the match after a concerted build-up.

The second and only other try of the first half was started in similar fashion from another win against the lineout, and another multi-phased build-up under the posts before Samuelu waltzed through a gaping hole from a ruck to score the try. St Pat’s Town first five Cameron Burgess added his second conversion.

Wairarapa-Bush closed out the first half in the ascendancy with the wind in their favour but failed to capitalise on their chances.

Now with the wind, the Centurions were able to establish a field position and Samuelu’s second try was followed by tries to replacement prop Aleki Leala out of Wainuiomata High School and right wing Gerry Tuliletu-Naitini out of HIBS, both as a result of attacking scrums.

As well Samuelu and Petaia, other players to stand out for the Centurions included his locking partner, Tawa’s Sione Valu, and Paremata-Plimmerton tighthead prop Ted Northcott who made numerous runs with ball in hand.

For Wairarapa-Bush, the aforementioned Tuiloma was a standout, while No. 8 Cody McLashan and halfback George Eschenbach toiled hard throughout.

Elsewhere, the Whanganui U18s beat the Wellington Samoans U18s 24-22 in their match at home, meaning that the winner of the Hurricanes U18 competition next week is likely to be either Whanganui or the Centurions.

The tournament continues tomorrow, with the Wellington Black team playing Manawatu at Petone and the Wellington Gold team facing Horowhenua-Kapiti at Waikanae.