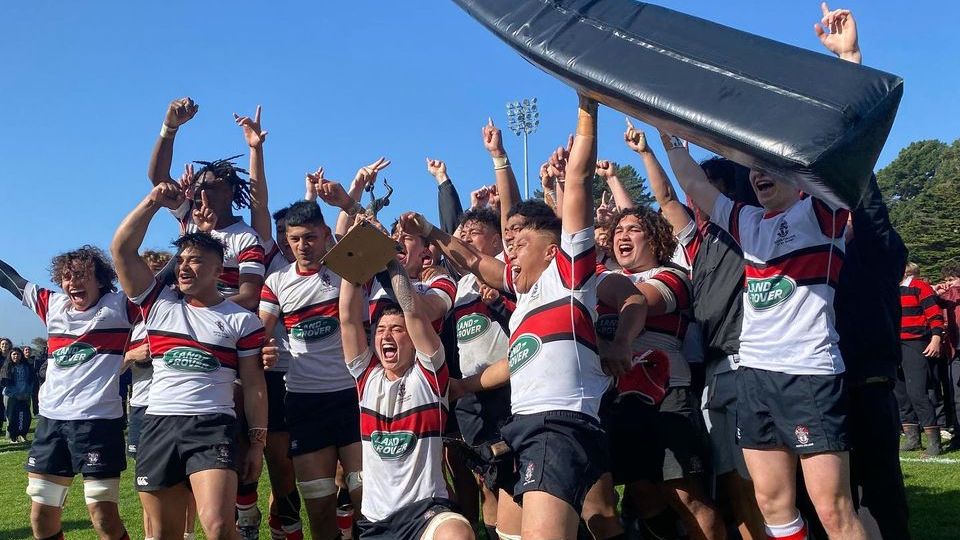 An overnight storm and pre-game rain parted for a fine, blustery afternoon at Porirua as a healthy contingent of supporters from both sides filled both ends of the grandstand.

Scots’ dominant set-piece and extra pace out wide paved the way for their win that saw them leap to an early two-try lead and then relinquish it early in the second half, only to re-capture it and hold off their rivals to the end.

It was the Scots supporters who were chanting the loudest midway through the first half after Scots had scored twice to go 14-0 up, playing into the wind.

The first clean break into open space of the match happened right in front of them as left wing Piripi Tapsell was bundled into touch in the left-hand clubrooms corner.

Referee Lawler brought play back for a free-kick to Scots, who kicked for the lineout, and several phases later tighthead prop and vice-captain Jonty Bird crossed for the first try. Second five-eighth Oryaan Kalolo slotted the conversion.

Scots were in again soon after they shunted the defensive Silverstream scrum backwards, and Silverstream second-five Junior Paulo had the ball stripped from his grasp as he attempted to run it up and Scots offloaded to year 11 centre Ietitaia Campbell who barged through from close range to score their second converted try.

Silverstream kicked the ball dead and missed touch from penalties, also conceding ground for backchat and pushing off the ball in a nightmare opening. Silverstream had beaten Scots twice in 2020.

Silverstream eventually settled and rallied back into the game with two consecutive penalties to Riley Higgins to trail 6-14.

A flashpoint of the game occurred right before halftime when outstanding centre and co-captain captain Higgins made a searing break up the grandstand touchline – in front of his chanting supporters – and offloaded to fullback Kobe Joe-Vulu. Joe-Vulu lunged at the line but put his foot in touch.

From that play an all-in melee ensued and the upshot was referee Lawler and his two assistants sent a player from each team to the sin-bin and awarded Silverstream a penalty.

No. 8 and co-captain Peter Lakai took a quick tap, burrowed under a sea of Scots jerseys and scored their first try. Higgins landed the conversion from out wide and Scots went into halftime leading 14-13.

Silverstream then sensationally hit the lead early in the second half when Higgins laid on a one-hand assist Joe-Vulu who made a beeline for the far corner and scored their second try.

The try was the climax of almost two minutes of possession for Silverstream, with No. 8 Lakai bursting up into the 22 and creating impetus for several phases of strident attacking play. Silverstream was now up 18-14 and momentum was definitely with them.

But Scots struck back using their scrum again as a weapon. From an attacking set-piece, Scots peeled off to the shortside and wing Sione Halalilo was unstoppable from close range, marked by a smaller defender. Now Scots led 19-18.

Silverstream re-took the lead with a Higgins penalty, but Scots quickly hit back with their second try of the second half and the match-winner from the very next kick-off.

Silverstream first five-eighth Tjay Clarke returned the deep re-start straight back down the throat of Scots replacement wing Archie Treadwell, who linked up with second five Kalolo who run into a gaping hole and found Ayden Hammond in space. He was almost stopped in a valiant tackle just before the whitewash by Clarke tracking back.  But the officials conferred and the try was awarded.

Scots now led 24-21 and there was still time left for Silverstream to score again.

They dug deep, but couldn’t find the spark required, Scots turned the ball over and won field position until the 70th minute and held on to win.

Curiously Silverstream didn’t resort to the quick tap, instead losing two lineouts inside the Scots 22 late in the piece.

Scots locks Maea Tema-Schmitt and Dominic Ropeti were at the heart of the bustling pack. The pair won kick-offs, lineouts and were assertive with ball in hand. Prop Bird and hooker Hanz Leota were abrasive. In the backs, Kalolo, whose final was rather forgettable last year, has matured into an organised and threatening talent while the shifting of Halalilo to the wing had the desired effect with the greater space making the big Tongan ever harder to stop. He scored 12 tries in a fine year.

For Silverstream Toby ‘Protein’ Crosby and openside Mitch Southall battled valiantly in support of the standout displays by Lakai and Higgins. Joe-Vulu played his best game of the season and lock Emmanuel Solomona never took a backward step.

Since 2012 Scots have won 65 of 81 Premiership fixtures with all three of their final successes against Silverstream coming by a combined margin of 11 points. Silverstream is 72-14 in the same period but have lost seven out of ten finals at Jerry Collins Stadium stretching back to 2002, five of them by less than seven points.

Ten of the last 14 games between the schools have been decided by less than a converted try with Silverstream holding a 9-5 advantage.

Between 2009 and 2015 the lowest-ranked qualifier won the final six years in a row, after four years of a first-placed victor that trend has resumed.

In 2021 Scots will attempt to join the 2009 Wellington College First XV in achieving a three-peat. Wellington in fact won six finals in a row between 2004 and 2009.