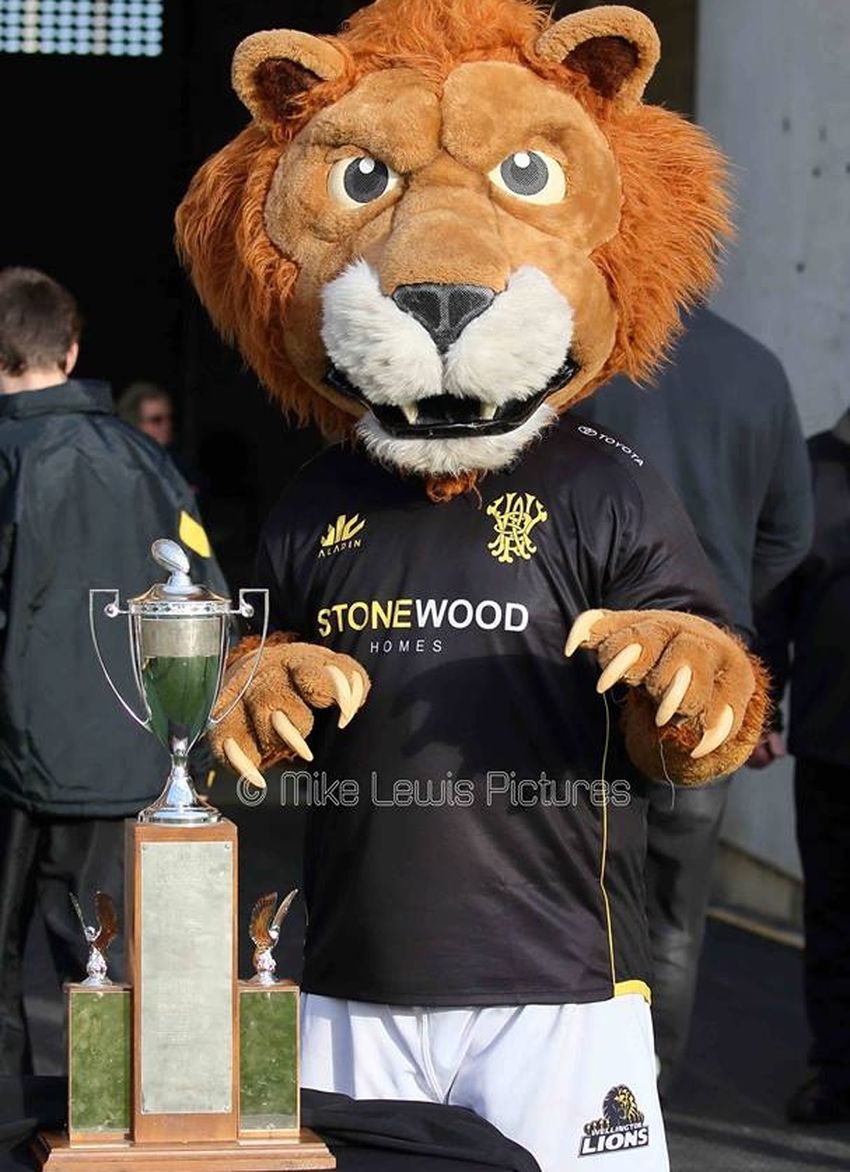 The Wellington Lions and the Taranaki Bulls resmue their National Provincial Championship campaigns against each other this coming Saturday afternoon at Inglewood, kick-off 2.05pm.

Some statistics and tidbits from the history of matches between Wellington and Taranaki is below.

The Lions will also be defending the John F. Henning Trophy (pictured with Leo the Lion above), donated for play between these two unions in 1969 by the then US Ambassador.

Friday’s match will be the 34th NPC fixture between the sides, with Wellington currently ahead on 29 wins to Taranaki’s four in their head-to-head history.

Overall, the pair has clashed 173 times in first-class fixtures going back to 1894, of which Wellington has won 122 Taranaki 46, with five draws and one abandonment.

The match between Wellington and Taranaki in 1907 remains the only provincial first-class match to be officially abandoned in New Zealand. The weather was so bad the referee called the game off at halftime, with Wellington leading 3-0.

Wellington beat Taranaki 12-6 at the Stratford Showgrounds on 10 September 1914, to stop Taranaki’s first Ranfurly Shield tenure at six defences. This was the last shield match for five years as World War One started a fortnight later. Three Taranaki players that played in this game – Henry Dewar and Reg Taylor (both All Blacks) and Outram Young – died in the war. Wellington’s second defence almost five years to the day in 1919 was against Taranaki, winning 18-10.

When Wellington and Taranaki played in 1920, Athletic Park was so cut up and in such a poor state that the field was turned around to run from east to west along the northern end of the field. In bitterly cold conditions, Wellington won 16-5 and retained the Ranfurly Shield.

In a heady seven-week period throughout August and September 1953, Wellington won the Ranfurly Shield off Waikato and defended it five times before losing it to Canterbury at the end of the season. On 29 August Wellington welcomed Taranaki on to Athletic Park for the first of these defences. Taranaki had beaten Wellington 9-6 earlier in the year. With 40,000 spectators and Ferdinand the Bull cramming Athletic Park, Wellington led 18-0 at halftime and went on to win 26-3.

Wing Ron Jarden scored seven tries in 10 games against Taranaki between 1952-1956, including consecutive braces against them in the second match of two between the Unions in 1954 and the first in 1955.

The Wellington Taranaki match at Hawera in 1962 was the 100th between the unions, but there was no celebration that day for the home team’s goal kickers. Taranaki had 14 shots at goal from tries and penalties and missed the lot. Two drop kicks also went astray. With four unconverted tries, Taranaki won 12-8.

Wellington and Taranaki fought out several nail-biting matches in the 1960s. Two such games in 1964 and 1965 were Taranaki Ranfurly Shield defences, after they had come to Wellington in 1963 and lifted the Log o’ Wood from Wellington just seven days after Wellington had won it off Auckland. In 1964, after three successful defences, Wellington was determined to re-claim the shield. Taranaki led 3-0 late in the match, but Wellington halfback Brian Coulter broke through to score what seemed certain to be the winning try – only for Taranaki centre and former Wellington player Neil Wolfe to snatch the ball away from Coulter at the last moment. The following year, Wellington famously beat the Springboks 20-6 and then set its sights on winning the shield a few weeks later. But, playing against a strong wind, Taranaki held Wellington to 3-3 at halftime and then sailed to an 11-3 win.

Taranaki’s first-ever match in Division 1 of the NPC was against Wellington in 1977. Taranaki won 18-10.

In 1981, Wellington won the Ranfurly Shield and the National Provincial Championship in the same season, a feat they haven’t achieved since. Wellington lost just twice all season, once to Counties in the final match of the year with nothing on the game and to Taranaki earlier in September. This was a midweek non-NPC match and second division Taranaki won 8-3 at New Plymouth.

Wellington’s only other NPC title wins were in 1986 and 2000. In 1986 they beat Taranaki 25-21 in Wellington in an unbeaten NPC season and in 2000 they won 41-13 in Wellington, with tries to Jonah Lomu, Christian Cullen, Jerry Collins and Semi Sititi.

Wellington has aggregated 1,130 points against Taranaki in all NPC matches, including 146 tries.

Taranaki has aggregated 655 points against Wellington in all NPC matches, including 77 tries.

The most points scored by a Wellington player in a NPC match against Taranaki is 23, by Jason Woodward at Wellington in 2012.

The most points scored by a Taranaki player in a NPC match against Wellington is 23, by Jason Holland at New Plymouth in 1997.