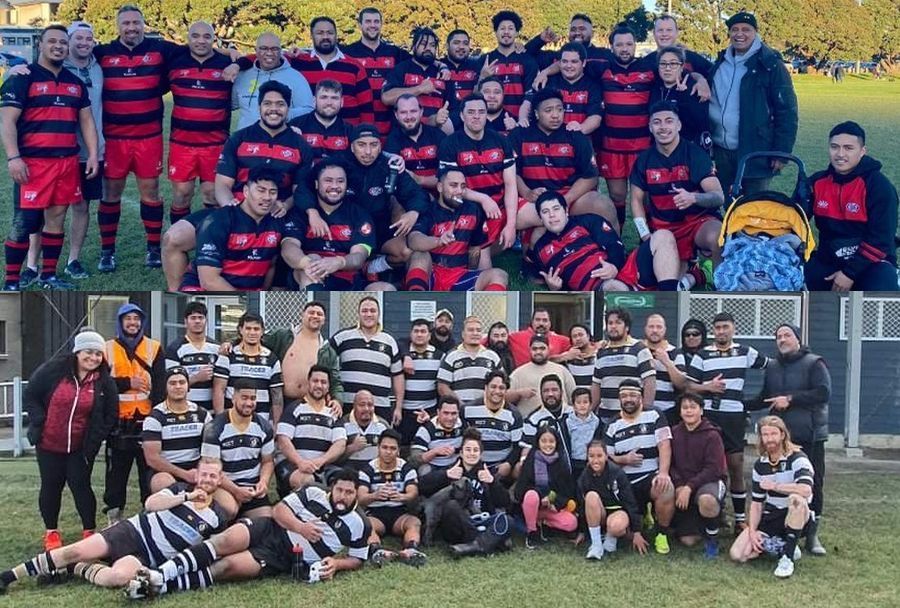 Members of the respective Ories Vatos and Poneke Ruffnuts sides after recent matches. Both teams carry large squads so plenty of other players not in these photos have been involved in their campaigns this year.

Perhaps the most hard-fought match of all this coming Saturday will be the Reserve Grade Division 1 final between home team the Ories Vatos and the Poneke Ruffnuts.

The final is on Polo Ground #1 at 12.30pm, before the crunch Jubilee Cup match between the Ories and Tawa Premiers.

It pits mate against mate, brother against brother, and both teams can call upon multigenerational playing power and support.

Ories are unbeaten – and one of the form sides in 2021 in Wellington club rugby across all grades – while Poneke have won seven from 11 matches including last weekend’s semi-final win.

In two matches this year, Ories have beaten Poneke 52-21 – in the opening competition match of the season – and 45-22 in the return match at Kilbirnie on the last weekend of May.

As rampant as Ories have been, form and statistics will count for nothing on Saturday.

Passion and commitment will take over.

Many friendships and rivalries between the two teams have been forged, both on and off the field.

Family traditions have passed through both teams and still form strong threads through both. There have been and continue to be many instances of fathers and sons and uncles and nephews playing together throughout the Vatos and the Ruffnuts.

The Vatos had a break but were reborn last year. The Ruffnuts are celebrating their 25th anniversary this season.

Vatos team organiser Sone Finai said that 2021 has been a good year for the team. “We won the first round and haven’t lost a game yet, which is pretty cool.

“The final this weekend will be a tough battle against the Poneke boys. Finals footy is a different ball game so it will be a good challenge our guys. Poneke are a passionate and well drilled team.

“Mate versus mate, it is pretty much our State of Origin. We expect Poneke to come out firing and with a well drilled game plan. We are very excited and looking forward to the challenge.”

Finai said the key to the team’s success up to this point comes from strong playing leadership and plenty of off-field support.

“Lui Aukuso, Viliamu Fa’aea and Fa’asili Tugaga, to name a few, and also having great support from our families, club and our RDO Poasa Poasa. We are a tight family team and it’s shown on and off the field.”

“Josh Leutogi and Tukia Purcell have been standouts and certainly know their way to the tryline. Veteran Fa’asili Tugaga has been playing outstanding for us, returning back to rugby after a seven-year break. Ili Tugaga has added great value in our team, returning to rugby after playing competitive cricket for the Firebirds, Eastern Suburbs and the Mighty Goons. Lui Aukuso, who is a life member at our club and who only wants to play if its sunny, has been nothing but amazing. A real club man and his knowledge of the game has helped us win a lot of games this year. He has been playing since 1986!”

Ruffnuts spokesperson and coach Antz Carter said that the Ruffnuts are excited and privileged to be part of the final against the Vatos, the team that everyone has had to measure against over the past couple of seasons.

“The Ruffnuts over the past three seasons has featured a majority of young and new to rugby players, with a helpful sprinkling of seasoned veterans. It has been pleasing to see the progress and learnings by the team and particularly satisfying to be playing in this year’s final,” said Carter.

“There are a number of standout players this season for the Ruffnuts, too many to mention, each bringing commitment and enthusiasm to our family environment.  One of the drivers for the team was to provide an opportunity for people to play rugby, accepting work and family commitments as priority but not letting that be a factor in restricting their involvement and playing.

“The development and implementation of a Ruffnuts Wellbeing Programme this year further allowed us to provide pastoral care and support to players and their families, which helped to ease some of the pressures outside rugby. This became particularly important with the effects of the COVID-19 pandemic being felt by players, teams, and clubs alike.”

The Ruffnuts acknowledge the Poneke club’s support and the WRFU in getting us through a couple of tough seasons administrative wise, and also to the teams in our Reserve Grade who displayed and highlighted the value of a true local club rugby environment.

“An example of this was the Ruffnuts being able to play Paramata-Plimmerton and Stokes Valley at their home grounds and on their Old Timers’ Days. The positive spirit the games were played in and to see the local support for their club teams was awesome and humbling. Our thanks also go out to Tawa and Upper Hutt Pirates for their continued respect and rivalry this season.

“Leading up to this weeks final we’ve experienced a number of untimely injuries to players and unavailability through work commitments, but this is what we have had to navigate all season. The players who will take the field for the Ruffnuts this week will represent well and the game itself will be a great occasion to be part of, and fitting end to our season.”

About the John Davies Cup

John Davies is a Life Member and Past President of Poneke and a Past President of WRFU. He is a Professor Emeritus at the School of Management at Victoria University of Wellington. The Cup has been played since 2015, with the Poneke Ruffnuts winning the first two editions of it. It wasn’t played for in 2017, and the Upper Hutt Rams won in 2018 and 2019. It wasn’t played for last year either, with Ories winning the double round-robin Mike Copeland Cup which they retained in the first round this year.