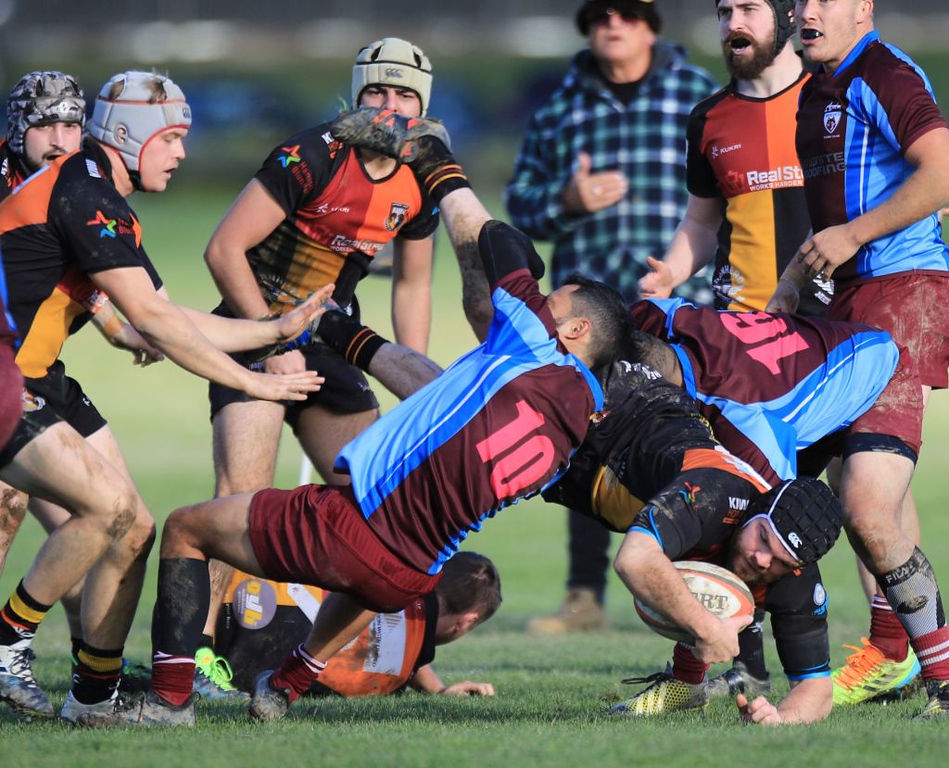 Premier competition matches at a glance this Saturday:

Marist St Pat’s and Hutt Old Boys Marist with byes, to play the winners of the above matches next weekend in the semi-finals. It is also noted that in this system, the draw for next week gets ‘switched around’ from games played this Saturday just gone, so MSP will play either OBU or Norths and HOBM will meet either Ories or Tawa.

The Wellington Lions squad is set to be announced this week.

Moana Pasifika‘s place in an expanded Super Rugby competition is set to be confirmed today, with two former All Blacks to lead the coaching set-up. former All Black Aaron Mauger is set to be unveiled as the inaugural coach of the Auckland-based franchise, with Filo Tiatia as his assistant. New Zealand Rugby awarded the franchise a conditional licence in April to join a revamped competition, alongside five teams from New Zealand, five from Australia and the Fijian Drua. READ MORE HERE

There is no school rugby this weekend, being the first week of the school holidays. There are a couple of matches only next weekend, such as the catch-up Premiership fixture between Wellington College and Mana College. Following Scots College’s 17-15 win over St Pat’s Silverstream on Saturday, Scots are unbeaten and will be at least 4 points clear of the rest with Wellington College’s catch-up match and then two full rounds for everyone to go before the semi-finals.

The Wellington Pride were beaten 38-5 (unofficial score) by the Manawatu Cyclones on Saturday in their match at Waikanae. Plenty of work for them this week at training. They are set down to host the Otago Spirit this coming Sunday at Porirua Park in their Farah Palmer Cup season opener.

Largely due to his side being named late on Friday, our preview column omitted that it was HOBM winger Fereti Soloa’s 100th Premier game for the Eagles on Saturday. And the Naenae College product celebrated in style, squeezing in the corner to score a late, late try for his side against OBU and set the stage for Brandyn Laursen’s dramatic game-winning conversion:

Two last minute kicks to win games for Hutt Old Boys Marist on Saturday. As well as Laursen’s kick (above), Flynn Ruscoe slotted a penalty to help the 85kg side defeat Stokes Valley 23-22.

A few weeks ago we mentioned HOBM’s Steven Bradshaw making a cameo for their Premier side in his return to the game after having retired in 2014. Well in the past two weeks that gap has well and truly been eclipsed by Petone’s Hoani Tui who after making over 80 Premier appearances for the Villagers ventured overseas. He made his return to the side last week against Wainuiomata and started on Saturday against Tawa, his first outings in Wellington Premier rugby since he left in 2008!

A big weekend for former Petone outside back Viliami Fine. One of three players who ventured south to try their luck in Dunedin with the Harbour club alongside fellow Villager Willie Tufui and Norths’ Bruce Kauika-Petersen, he was firstly named in the Otago squad for the upcoming NPC, then called up by Tonga for their clash with Samoa on Saturday where he came off the bench in the 13-42 loss.

Speaking of Bruce Kauika-Petersen, the return of the reigning joint-Best and Fairest winner to Norths on Saturday raised eyebrows, with Club Rugby fielding queries about his eligibility. In this regard the WRFU bylaws are clear, that to be eligible for the finals a player must have played in at least games for their club OR be a WRFU-contracted player. As he doesn’t meet the first part of the criteria, its very evident that he’s picked up a union deal for the NPC.

It seems clear that door locks and leading Wellington referee John Ballingall do not mix. Two years ago he (and others) found themselves locked out of the referees room at the Polo Ground – which now bears his name – after the only key went missing requiring the door being broken down, while last week the changing shed at Evans Bay was locked by council contractors while he was refereeing the St Pats Town vs Scots college premiership fixture. On Saturday he managed to lock himself out of his own home and with time short and his refereeing gear inside he was forced to borrow a full set of kit from colleague (and Club Rugby contributor) Scott MacLean in order to fulfil his duties at Porirua Park.

In Palmerston North on Saturday, the Feilding Yellows won a three-peat of Manawatu club rugby Hankins Trophy finals. In front of a crowd of 2,500, Feilding Yellows trailed Varsity 3-10, but came back to win 22-18. Fullback Drew Wild landed five penalties and the conversion of his team’s sole try.

Paraparaumu won the Horowhenua Kāpiti final – beating Levin College Old Boys 36-33 in extra time at Levin Domain. Owing to a text message by an unreliable source (possibly a Levin College Old Boys supporter, although he assured us he is neutral) we mis-reported this result the other way round on Saturday night (since changed). But the photo below tells the story!

This coming weekend sees three more titles decided. In Hawke’s Bay, Hastings will face Taradale, in Taranaki Inglewood and Coastal meet, and in Wanganui, Border clashes with Kaierau. Wairarapa-Bush are at their semi-final stage.

Coles has 17 tries in 76 tests which is a world record for a hooker, passing Ireland’s Keith Wood who scored 15 tries in 63 tests.

Coles is the 17th All Black to score four or more tries in a test against Fiji, but the first from the bench. Sitiveni Sivivatu scored four against Fiji in 2005 as did John Gallagher and Craig Green against the same opponent in the 1987 World Cup. Jeff Wilson scored five against Fiji in 1997.

A big result in the Super 8 First XV competition on Saturday, with freshly minted Super 8 football champions Tauranga Boys’ College picking up the ball and running with it and beating the previously unbeaten Chiefs Academy XV 13-12.

In the Crusaders First XV competition, Timaru Boys’ High School (fifth) beat St Thomas’ (second) 19-12 this past weekend, leaving St Bede’s now the competition leaders heading to the school holidays and with three rounds to play. Christchurch Boys’ HS are languishing in seventh. The winner of this competition could be playing in the Top 4 in September.

How to solve the problem of live-streaming your Premier 2 games when them and the top team are playing at different venues, as has often been the case this year with the re-jigged draw formats? Buy a second camera and run two live streaming operations concurrently at different venues! That is what Tawa TV have done, so on Saturday crew #1 was at Maidstone to cover their Ed Chaney Cup side win 38-26 over the Upper Hutt Rams and crew #2 was at Lyndhurst to see their team go down to Petone 7-27 in the Jubilee Cup.

Where has the Silver Lake conversation gone? Wouldn’t David Kirk be more trustworthy than an American Private equity firm?

An official crowd of 15,013 souls in Dunedin on Saturday night for the test match. A worryingly small crowd?

The New Zealand U20s played a Tasman XV yesterday and won 40-5 in a lively match, despite a long second half injury break.

The NZ U20s are gelling well. This win for them continued on from their 40-0 win over a Wellington XV and their 52-33 win over the Waikato Harlequins, after being up 40-26 at halftime. They play one more game this coming Saturday in Auckland, against the Cook Islands.

In some player observations, both locks, Josh Lord and Zach Gallagher had big games and played the full 80 minutes. Lord is a hard-working, gifted athlete and is a player to watch.

Hooker Soane Vikena is great on defence, although his lineout throwing was a bit astray a few times.

Hometown openside flanker Anton Segner came on in the second half, and he is a tackling machine. He also got a good turnover over the ball, nicked it clean.

Aidan Morgan played well at first-five and his passing accuracy and assertiveness improved as the game developed, Ruben Love played fullback. He showed some nice touches, kicked well, but is first-five his position?

Wing Jacob Ratumaitavuki-Kneepkens is big and fast and he will go far. Chay Fihaki had a good game on the right wing, and is an accurate goal-kicker.

TK Howden had an industrious game at blindside flanker. He is strong on both attack and defence. However, he went off with a shoulder injury in the second half.

Riley Higgins and Peter Lakai came on in the second half. After quiet games against Wellington and the Waikato Harlequins, Higgins resumed his previously outstanding form in the midfield, and comparisons to Conrad Smith and Jason O’Halloran are not out of place. He set up Peter Lakai for a brilliant try, with a beautiful run and short ball, and Lakai’s power and pace allowed him to sprint 30 metres to score. Good hands from Lakai too, it was a cold day in the top of the south that was a ball that could have been easily spilled.

Bond Banter tuned into the Sunday afternoon NZME radio show called the DRS for a while this week. No Martin Devlin, has the St Pat’s Silverstream old boy been cancelled as well?

From the vault: Seventh round matches in photos

Most points in the Premier club rugby match