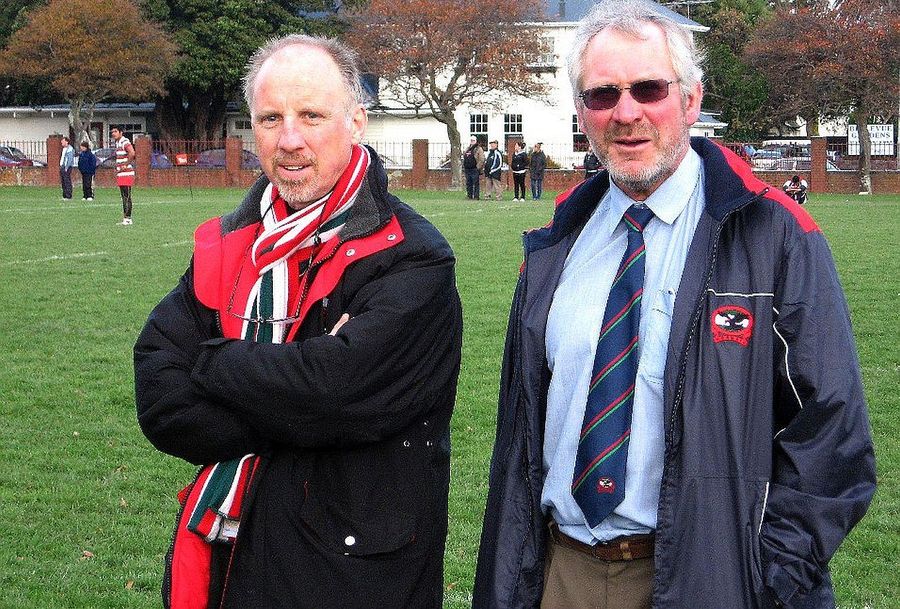 In a new series, we catch up with a Life Member from a club.

In the second of these articles we catch up with John Sheehan from Hutt Old Boys Marist.

What is your rugby background and where did you spend your formative years?

I started playing rugby at Hutt Intermediate School and have been involved with the game ever since.  I played at Hutt Valley High School but never reached great heights, being in the top Weight Grade team in my last two years.  I joined Hutt Old Boys in 1970 (my father was an avid ‘Hutt’ supporter, so I was always heading to the Hutt Rec) and played in the Colts A team for two seasons before joining Hutt Valley Marist for a season in 1972 playing U21 grade.  I re-joined HOB the following year.

Talk us through your association with HOBM?

I played mainly at junior 1st level with a handful of games at Senior Reserve level.  I retired in 1980 after four seasons with our J8’s where we won the grade at least twice.  I was also a member of HOB’s first Golden Oldies team ‘the Hob Nobs’ for a few seasons.  I was a Committee member for a few years in the late 1970’s and early 1980’s and re-joined the (now Hutt Old Boys Marist) Committee after we were relegated in 1999.  I remained on the Committee until 2018 during which time I held positions at various times as Rugby Convenor, Secretary, Union Delegate and Treasurer, and for a couple of years both Chairman and Treasurer.  I was made a Life Member in 2014.

On any given Saturday during the season, what is your current involvement?

I am purely a spectator these days and don’t miss many games, be it home or away.  We are fortunate to have the Hutt Rec grandstand and Longroom – still the best viewing points of club rugby in Wellington.

What have been a couple highlights or moments on and off the field during your time with your club?

Watching our Premiers win the Jubilee Cup at Athletic Park in 1991 and then again in 2007, and being Chairman when we won it again in 2014 at home at the Hutt Rec.  In terms of off-field highlights, initiating the Club Centenary celebrations in 2010 and the same year championing the Centenary building project.  Also being heavily involved with the development of our artificial training pitch a couple of years later.

Who have been your favourite players at HOBM?

It’s hard to go past the Club ‘Legends’ (200+ Premier games); Dougie Power, Marty Wallis, Nick Risdon, Polonga Pedro and Simon Malaeulu, plus Jeremy Thrush and Hosea Gear who were great club men when they were here.  Of current players Tomasi Alosio (Samoan 7’s Captain) who is playing as well as I have ever seen him play and James O’Reilly who never gives less than 110%.   Watching Chase Tiatia play at club level is always a thrill too.

Is there a favourite opposition ground or venue you have enjoyed going to?

I have always enjoyed the hospitality at Poneke and whilst the Polo Ground isn’t a great ground to watch rugby, I always enjoy the post-match catch up with the Ories boys.   The North’s supporters are also a great bunch to share a bevy with too, whether at the Hutt Rec or at North’s clubrooms.

Club rugby and rugby in general, has changed, and not always for the better. What are your thoughts on how the game and how club rugby has changed over the years?

I still rate Club Rugby as the best rugby to watch.  This is rugby at its purest, these guys play for nothing more than pride in the jersey and to do their clubs proud.  It is a shame the administrators at NZR have lost sight of the value it brings to the game and to the local communities.

Of course, societal changes mean the attraction of clubs and team sports has waned over the past couple of decades, meaning rugby competes with many other leisure opportunities for youth participation.  As a Committee member since 1999 it is crazy to think that a strong club now may have six teams, instead of maybe twice that 20 years ago.  Yet, encouragingly, many clubs have as strong a Junior section as ever.  The massive challenge is to hold onto these Junior players.

I believe the confrontational and combative nature of the game today is a put off for many players and their parents.  I still cannot fathom how clean-outs at the ruck, many in front of the ball, with players in the ruck often unprepared for a physical collision, can be sanctioned as being within the laws of the game!  I believe there needs to be rugby of a less-confrontational brand to entice and keep ‘social’ players in the game.

We have reached a tipping point.  Sure, we need the high-intensity game for the players able to compete at Premier and Reserve level, and to be able to prepare players to compete at this level and beyond.  But as a Union we must now find transformational ways of involving others in the game. We are losing close to 70% of the players entering college as current rugby union players, during their three or four years at college.

The Saturday afternoon, 15-a-side game has its place, but to widen the attraction of the game once more we need to be thinking outside the square.  We should be considering how we might grow participation, be it weight grade and women’s rugby at college and how we might develop other club-based team opportunities such a sevens, touch and 10s.  There is no reason these cannot be all-year-round sports or another alternative in Winter.  If our clubs are to survive, we need to find ways of maintaining a critical mass of playing members.

To achieve any transformational change there needs to be a commitment to change and real investment in the game, and in my view, it is now time for clubs to take management of the game at college level.  That is not going to happen without leadership from the top driving this.

I know nothing about the details of the Silver Lake deal but I do know that NZR needs to realise it is slowly strangling the grassroots game and needs to address this now.  Leaving clubs to be bottom-feeders and pinching all the stars at college and schoolboys level and channelling them to the professional game through Academies does nothing for clubs, and without providing a transformational vision for the future, is ultimately undermining the very foundations of the game.