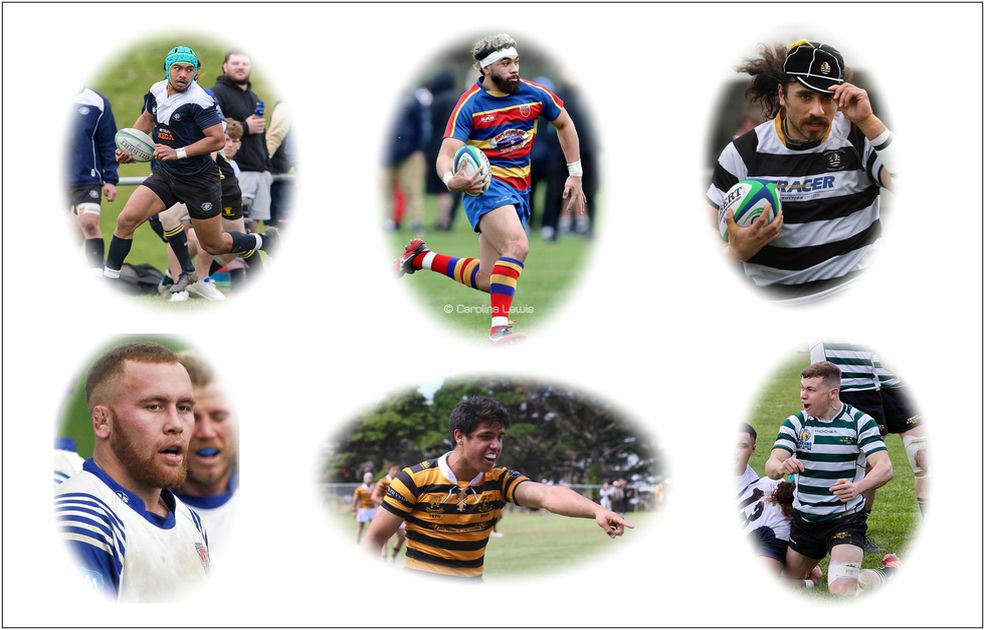 Above clockwise from top right: Willie Fine, Tom Maiava, Tuakana Metuarau, Sam Reid, Isaac Bracewell and Bruce Kauika-Petersen all make the starting XV in this season’s Best & Fairest competition team. The winner of the competition – either Reid or Kauika-Petersen – will be announced at the upcoming WRFU Community Awards.

One of the staples of our coverage each year has been to name a side based solely on the standings of the Billy Wallace Best & Fairest competition, and despite everything 2020 has thrown at us this season is no different with our eighth iteration.

It’s an eclectic mix at the top of the standings – again with the 3-2-1 scoring allocated by the referees from the WRRA – with both big ball carriers and smaller playmakers featuring in equal measure. But in some positions, such as lock, prop, wing, and – unusually – hooker, we’ve had to take a deep dive into the standings.

Our selection criteria is based on who was awarded the most points during the season and for the most part players have been selected in the position where they played the majority of their club games this season in. Where players are tied, we’ve split them firstly on the number of times they were awarded the three points in match, then by where their side finished in the season. We also exclude non-Wellington Hurricanes players unless they have an attachment to the club they have turned out and scored points for, as is the case this year.

One thing we won’t be doing though is naming the winner. Norths’ flanker Bruce Kauika-Petersen and OBU fullback Sam Reid went into finals weekend not only facing off in the Jubilee Cup final, but tied at the head of the standings on 14 points as well with no one else able to catch them. Whether either scored points in the championship decider to break the deadlock will be announced by the WRFU at their end of season awards.

Those two do however head up our team. It’s the first time for Reid while Kauika-Petersen makes this side for the second consecutive season, only this time its on the openside rather than at hooker where he was last year.

Kauika-Petersen is one of three players who make a return to the starting lineup from the 2019 edition, alongside a pair of the club games great servants in Wainuiomata’s Greg Lealofi and OBU’s Jonathan Fuimaono. Three others also return in the 22, with Petone’s Willie Fine and Ories’ Tuakana Metuarau being elevated to the starting side from the bench, while OBU’s Dale Sabbagh’s Jim Brown Medal winning performance saw him edge out his opposite on Saturday, Norths’ Sam Clarke, for the spot on the bench behind MSP’s wunderkind Aiden Morgan.

The two other players who garnered the three points in their respective Premier finals matches also make this side. Wainuiomata’s Tyler Tane turned in his fourth Man of the Match performance of the year in the Hardham Cup final, while Poneke’s 2018 Best & Fairest winner Greg Foe had his third, which saw him pip Upper Hutt’s Murphy Taramai for the No8 jersey.

The closest race was at halfback, with Wainuiomata’s Jordan King, Petone’s Logan Henry, and Wellington’s Isaac Bracewell all tied on 9 points. Bracewell scored three points twice and King once so they take the places, with Henry the unlucky one to miss out.

OBU, Ories, and Wainuiomata each have three players make this side, with only Paremata-Plimmerton and Avalon not represented.

In all 157 different players received Best & Fairest points in 2020.

The 2019 Billy Wallace Best & Fairest Wellington club rugby Team of the Year, with their points accumulated in brackets with their club

* any points from the Jubilee Cup final are not included