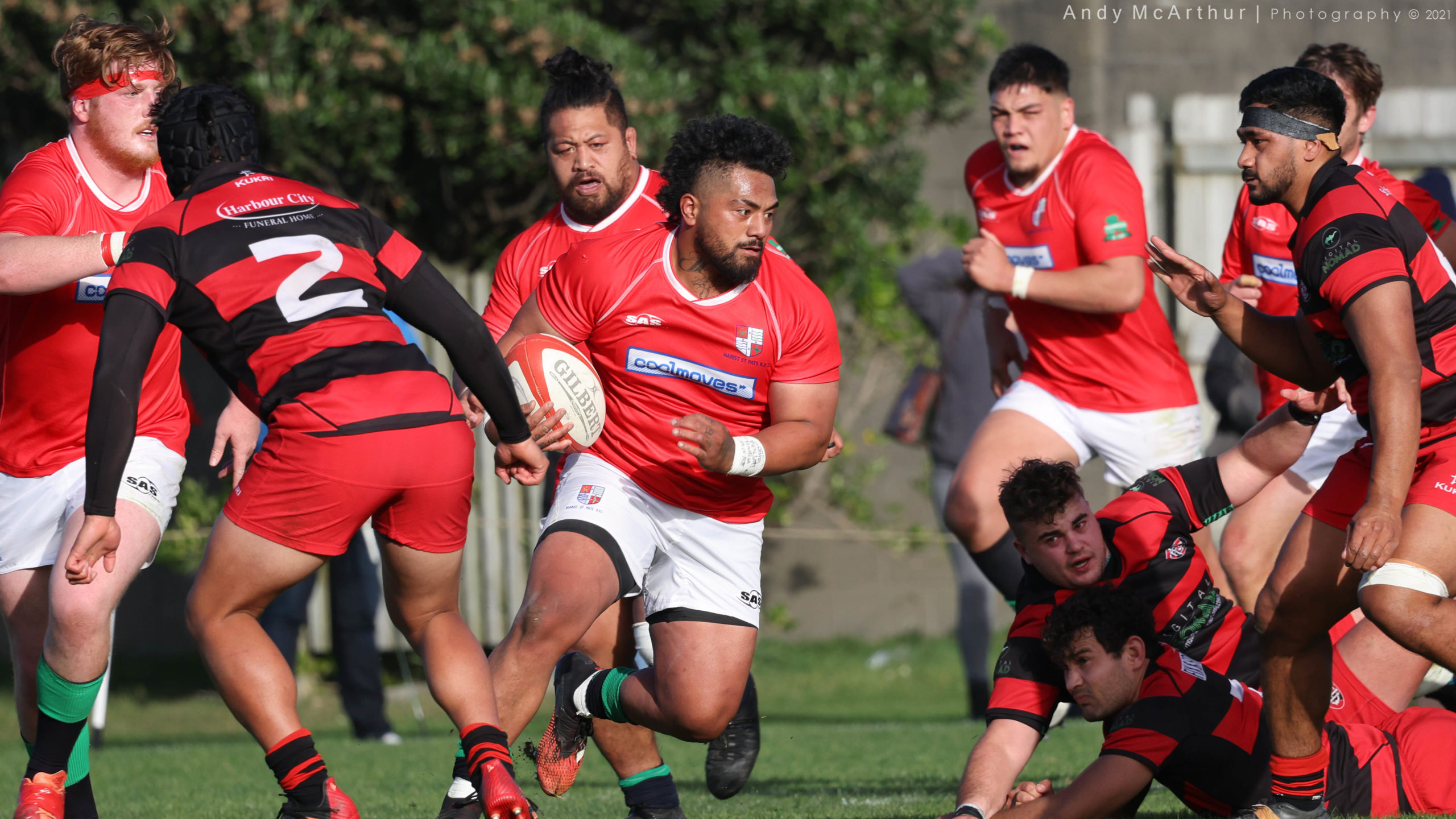 Both were comfortable winners in round four this afternoon, played around the region in cool breezy conditions.

Openside flanker James Tuia (pictured above) scored four tries for the home side.

At Hataitai Park, Old Boys University beat the Wellington Axemen 66-3 in their match for the Dean Gifford Memorial Cup.

MSP and OBU are the unbeaten pair following their wins and fourth round defeats today to previously unbeaten Upper Hutt Rams, Oriental-Rongotai and Petone.

At William Jones Park, the Rams lost 22-47 to Wainuiomata, at the Hutt Rec Oriental-Rongotai lost 18-37 to Hutt Old Boys Marist for the Bondy Memorial Cup and at the Petone Rec the home team went down 37-54 to Northern United in their Murray Henderson Trophy fixture.

In other games, Helston Park was the venue for the Johnsonville Hawks’ 41-29 win over the Avalon Wolves, while at Ngati Toa Domain the Paremata-Plimmerton Hammerheads missed out 10-71 to Tawa.

In the battle of Kilbirnie, home team MSP and Poneke shared early penalties and a tight and willing exchange remained locked at 3-3 after 25 minutes.

MSP kicked their second penalty to go up 6-3, before scoring the game’s first try to see them extend their lead to 11-3.

Right on halftime, MSP crossed for their second try, through second-five Isaia Petelo, to send them to the sheds up 18-3.

MSP tighthead prop Tuiatua Tuia scored first after halftime to extend the lead to 23-3, before Poneke flyhalf Pakai Turia intercepted a pass and sprinted away to score in the corner.

Andrew Wells sold a big dummy and Tuia crossed again, before they scored another two tries in a final flurry.

At the Aviary, the HOBM Eagles soared to a 37-18 win over the Ories Magpies.

Three well-taken tries and the boot of second five Brandyn Laursen propelled them to a 27-11 lead approaching halftime. Ories hit back with their second try of the half and second to left wing Jason Tuitama to trail 27-18 at the break, and turning around with the southerly wind in their favour.

In a scrappy second half the only further scoring of the match would be two further tries to HOBM as they kept Ories scoreless.

Two big plays by the HOBM forwards in the 50th and 60th minutes respectively proved telling for the result. The first of these was an attacking play, a clinical lineout drive only just thwarted by Ories. However, the defenders soon failed to clear their 22 and Ories had another lineout and this time went wide to HOBM fullback Tomasi Alosio which extended their lead to 32-18.

The second big play followed several minutes of concerted attacking by Ories on the Eagles’ own goal line, but HOBM defended and Ories coughed up the ball which would effectively end their comeback chance  The rest of the match was a disjointed affair, and HOBM finished with their final try at the end to right wing Nash Fiso-Vaelei.

Earlier, HOBM had opened the scoring in the 15th minute by taking a quick tap penalty in their own halfway, and feeding Hurricanes hooker James O’Reilly and left wing Fereti Soloa for the try. Laursen and Ories’ half back Declan Hay exchanged penalties before Soloa and O’Reilly combined again out wide for their second try.

HOBM scored their third try of the first half from a lineout drive in the far corner, prop Vili Tauofaga coming up with the spoils.

Ories also lost a couple of players through injury during the match, which didn’t help their cause, while replacement flanker Sione Halalilo added impetus off the bench. For HOBM, Laursen had a solid game in the midfield and lock Aisea Mafileo was industrious. O’Reilly, who was involved in two first half tries played the first half only.

At the Petone Rec, Petone held a 14-12 lead over Norths in the first half, before Norths found another gear and stormed away to win. For Norths, they would score eight tries, with six players scoring one try, a penalty try and two to centre Joe Faleafaga.

Norths No. 8 Luca Rees was the recipient of the Collins Medal – named jointly after former deceased players Willie and Jerry Collins.

Paremata-Plimmerton were in the fight early, but Tawa went on to score three converted tries in a short space of time to move ahead 21-3.

A turning point in the home team’s resistance occurred when they failed to find touch from a clearly play and Tawa second-five James So’oialo strolled through to score the try.

The second half was an avalanche of scoring, as Tawa would eventually win 11 tries to one.

Tawa made a strategic change at halftime, with Kemara Hauiti-Parapara moving from 10 to nine and Luke Walmsley coming off the bench to first-five. Tawa got a roll on and scored seven second half tries.

Down the motorway at Helston Park, home team Johnsonville made a fast start against Avalon, scoring two tries and kicking two penalties to lead 19-0 after 16 minutes.

Avalon scored their first points and closed the gap, but a second try to second five Andy Ellis immediately before halftime put them up again and they stayed in front to the end.

Wainuiomata fullback Campbell Cowie scored two tries inside the first 20 minutes en route to his team taking a 26-7 lead into halftime against the Upper Hutt Rams. Openside flanker Sam Smith also scored two tries for the green and blacks as they pushed on to win 47-22 and end the Rams’ unbeaten start to their campaign.

Tawa remained the leaders and sole unbeaten team in the Premier 2 Division 1 Harper Lock Shield after they beat OBU 25-11 at Nairnville Park. But behind them three teams are giving chase after they all won today. Ories are second after beating winless HOBM 41-31 at the Hutt Rec, with Norths and Poneke each a point further behind after they beat Petone 44-14 and MSP 25-15 respectively.

In the Premier 2 curtain raiser on Hutt Rec No 1, Ories did the damage against HOBM in the first half with the southerly wind at their backs.

Ories scored four well-taken tries and led 24-5 just before the interval when HOBM broke out and scored the try of the match up the grandstand touchline to cut the lead to 24-10. Ories then kicked a penalty right on half time to take a 27-10 lead to the turnaround.

The first 20 minutes of the second half was scoreless before HOBM scored their third try to close the gap to 27-17. But Ories found a second wind and pulled away over the remainder of the match. Standout centre Ethan Webster-Nonu fittingly scored the closing try.

It was a series of close results in Premier Men’s Division 2. The Upper Hutt Rams and Stokes Valley seem headed for a decider after both retained their perfect records. The Rams beat Wainuiomata 31-17 in the early game at William Jones, withe Rhinos made to work by the Wellington Axemen before prevailing 24-17 at Hataitai. Pare-Plim scored their second win of the season by edging Petone White 15-12 with Johnsonville doing likewise, getting home by a point 18-17 over Avalon at Helston.

There were wins in the Division 1 Paris Memorial Colts for OBU Green, Oriental-Rongotai, and MSP. Defending champions OBU ventured to Lyndhurst and came away with a 29-17 win over Tawa, Ories beat HOBM 26-22, and MSP got the spoils in a low-scoring match 14-10 over Petone on Kilbirnie #2. In the Division 2 JRD Cup Avalon blitzed Poneke 69-22, the Upper Hutt Rams got up 35-14 over Wainuiomata, and OBU Black beat Pare-Plim 39-24 at Ngati Toa Domain in a game marred by three red cards.

In the early Colts game at the Hutt Rec Ories scored a try on fulltime to win the game 26-22. HOBM had outscored Ories two tries to one to lead 12-7 at half time. HOBM lost a player to a yellow card late in the first half, and Ories came back with their second try to level 12-12 early in the second half.

In the Women’s grade there were a pair of rather lopsided results in the Division 1 Rebecca Liua’ana Trophy matches as both Oriental Rongotai and Norths piled on the points. Ories accounted for Marist St Pats by 89-15, while Norths bested Petone by 63-17.

In Division 2 the result of the day was at Nairnville Park where Poneke ended a four-year and 39-game winless drought by beating Old Boys-University 39-21. Elsewhere Paremata-Plimmerton and Hutt Old Boys Marist remained on course for a decisive last round contest with wins today. Pare-Plim beat Wainuiomata 65-5 with Thamsyn Newton again to the fore, scoring her third hat-trick in as many weeks as the home side ran away with matters in the second half.

HOBM made a cracking start in the second half when centre Sarahcen Oliver finished a break to put her side up. Avalon then lost a player to the sin bin, shortly after which HOBM broke upfield and scored again.

From that point, HOBM kept their noses in front and won an emphatic victory over their riverbank neighbours.

Eastbourne assumed control of the Under 85kg JC Bowl after winning the battle of unbeatens by toppling Avalon 18-12 at Fraser Park. The other four results were rather contrasting; the Upper Hutt Rams crushed Poneke 80-19 and Johnsonville accounted for MSP 64-7, but matters were closer elsewhere with the OBU Scallywags getting home 17-15 over Wellington, and HOBM did likewise 21-19 over Wests.

Petone and Norths come out on top in close games