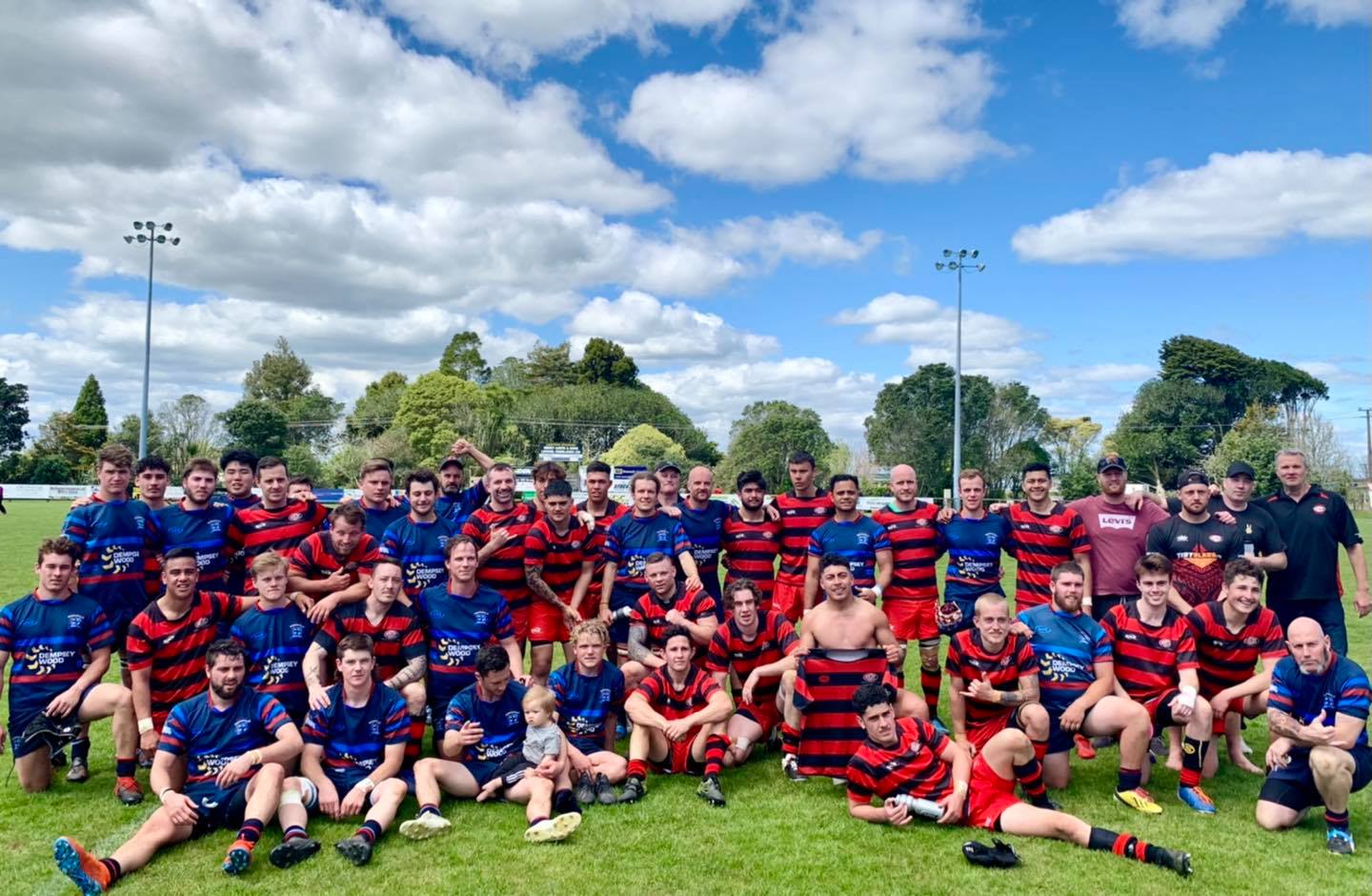 Above: The Poneke U85kgs scored off a cross-kick in injury time to beat Morrinsville Sports in their National U85kg knockout fixture on Saturday. PHOTO: https://www.facebook.com/WaikatoU85kgRugby

Believe it or not, there’s still club footy being played and it was a hugely positive one for all three Wellington sides that travelled north for the opening fixtures in the National Under 85kg knockout tournament. In Taupo, Avalon beat Hamilton Marist 22-18 and grade runners-up Eastbourne advanced from a 22-all with Fraser Tech by virtue of scoring that game’s opening try, while in Onewhero, Poneke beat Waikato champions Morrinsville 18-14 courtesy of a last-minute try off a cross-field kick.

With the Wellington Axemen also advancing after the Upper Hutt Rams withdrew, the likelihood is that these four teams will face off in the next round. Northern section winners from the weekend were Eden and Grammar TEC (Auckland) and Patumahoe and Karaka (Counties Manukau). We await the draw for the quarter-finals next round.

On the flip side, a disappointing day for the representative teams in Christchurch. The Wellington Pride were simply blown off the park by a rampant Canterbury and trailed 0-42 after just half an hour en route to a 12-54 humbling, while the Wellington Lions suffered the first non-playoff extra-time defeat in NPC history.

Speaking of which, is a draw no longer considered a valid result? Of course Wellington had to lose to Canterbury in the first ever regular season fixture decided in extra time.

Let’s be honest it’s hardly a vintage Canterbury team so Wellington blew a golden chance of a first win in Christchurch since 2009. The worst Canterbury NPC team was in 1992. They only won two games.

Liberace a new nickname for Du’Plessis Kirifi? Every week he plays with a different haircut.

The Ranfurly Shield crossed Cook Strait for the third time in a fortnight with Hawke’s Bay taking it from Otago. While the Lions’ wait to even get a crack at it goes on – Saturday’s game would have been a challenge if not for Taranaki winning two weeks ago – some faces familiar to Wellington rugby watchers got their hands on the fabled Log O’ Wood. Joe Apikatoa (HOBM) and Marino Mikaele-Tu’u (OBU) started with Joel Hintz (OBU), Isaia Walker-Leawere (Poneke) and Ollie Sapsford (Wellington) coming off the bench. Sapsford’s duties continued afterwards, serving as the mount for the obligatory Kurt Baker photo in the sheds following the game.

Hawke’s Bay are the fourth holder of the Ranfurly Shield in three weeks. The most in a single year is 5 in 1974 (involving Wellington).

Hawke’s Bay are fifth on the all time list for most successful challengers with seven.

The Magpies have home defences against Northland and Manawatu coming up, and if they see these off then Wellington would go to Napier (the scene of the last Wellington shield ‘challenge’ in 2014) on 8 November to try and nab the shield.

The Wellington Pride have lost their last 12 matches against Canterbury in Christchurch.

Unfortunately the Wellington Pride have been a huge let down. A relative lack of mobility within their forward pack has been brutally exposed by smaller, fitter teams. The absence of Amanda Rasch has really hurt too. The Pride conclude their short season by hosting Otago at Jerry Collins Stadium in a fortnight.

And speaking of the Pride, why were they forced to dip into their own pockets for food post-game?

Is Ories the only club where both Men’s and Women’s Premier Captains have Masters Degrees?

How entitled are the All Blacks complaining about being in quarantine for two days over Christmas? They are highly paid, privileged citizens bestowed the honour of representing their country in a climate where many people are unable to do what they normally do. The Phoenix and the Warriors spent months competing in Australia. Furthermore the great All Black sides of 1905-06, 1924-25 and 1963-64 all spent Christmas abroad.

Clubs that had their prize givings this past Friday or Saturday nights included Poneke, Old Boys University, Paremata-Plimmerton, Wainuiomata, HOBM and the Upper Hutt Rams.

No Heartland Championship competition this year, but the unions involved are playing a series of matches against each other, many that double for inter-provincial trophies.

Horowhenua-Kapiti hosted Wanganui at the picturesque Shannon Domain on Saturday, where the visitors pulled clear in the second half to win 36-7. The home side started with fire and brimstone, but, in the pattern of much of the match, Wanganui’s defences were firmly shut and there was no way through either at close-quarters or out-wide. Strong defence and an increasingly dominant set-piece aside aside, Wanganui made a dazzling array of unforced handling errors before finally crossing for their first try to lead 10-0 at halftime. Horowhenua-Kapiti scored a breakout try immediately after halftime to close to 10-7, but Wanganui took control from there with four more tries and won well.

A feature of the game and with the Heartland teams is the inclusion of all the veteran and players, who return every season to don their jerseys for provincial pride. For Wanganui, names and players such as first five-eighth Dane Whale (son of Kerry), fullback Craig Clare and replacement halfback Lindsay Horrocks are familiar and would probably all play for their province on Christmas Day. Horowhenua-Kapiti are younger and rebuilding with several debutants this year, but still have some familiar players from past seasons in their squad.

A tale of the two second five-eighths, both familiar to Wellington readers. For Wanganui, Timoci Serawalu played a steadying hand in their backline and scored one of their second half tries. Serawalu, who last year was playing for Horowhenua-Kapiti, is a veteran of the Northern United (2010-12), Tawa (2013) and Johnsonville (2013 as well) clubs and a regular on the sevens circuit over the past decade. For Horowhenua-Kapiti, Leon Ellison battled hard for all of 60 minutes before being chewed out the back of a ruck missing part of his tooth. The former Norths player left the field and will likely be visiting a dentist early this week.

Only 14 days until our teams set out to compete for the Women's and Men's National Championship. Our Men's Orcas are looking to defend their North Island and National Championship titles, while our Women's Orcas are looking to bring the National Women's Championship home. Congratulations to the following players who have been selected to for the 2020 Wellington Orcas Women's and Men's Rugby League teams. Special thanks to our sponsors and partners NZ MEP Fabrications, Wellington Engineering, CUS – Classic Uniforms & Sportswear, Prestige Ceilings & Linings, Atiawa Toa FM, Pelorus Trust, Beach FM 106.3 #FinsUp #Orcas #CapitalTeams #WellingtonRugbyLeague #BlackandYellow????

A post shared by Wellington Rugby League (@wellingtonrugbyleague) on Oct 2, 2020 at 12:25pm PDT

Below: Headline in the NZ Herald late last week. But it is behind a paywall, so perhaps just made up since few can read it?

This coming weekend in Wellington, the Wellington Lions host Otago in the NPC for the Mike Gibson Memorial Trophy on Saturday at 4.35pm and the All Blacks host Australia for the Bledisloe Cup on Sunday at 4.35pm.

Crowds will return to Eden Park for Test match rugby next weekend with confirmation of the second Bledisloe Cup match to go ahead on Sunday 18 October.

New Zealand Rugby (NZR) has welcomed the Government announcement today that Auckland will move to Alert Level 1 this week which will allow fans at the Test.

NZR General Manager Professional Rugby and Performance Chris Lendrum said it was great news to confirm the fixture in Auckland.

“Auckland fans missed out on both the North v South match last month and the Blues v Crusaders match so this is positive news that they will be able to enjoy Test match rugby.

“With only two opportunities to watch the All Blacks play in New Zealand this year, and both matches being on Sunday afternoons, we are sure fans will enjoy both occasions.

“There is a real buzz growing in Wellington and around the country as the home Bledisloe Cup series is about to get underway. Just under 28,000 tickets have sold for Sunday so we encourage fans to make sure they get in quick,” said Lendrum.