Skip to content
You are here
Home > Club Rugby > Close wins for Poneke, Norths, Johnsonville, Pare-Plim in eighth round matches 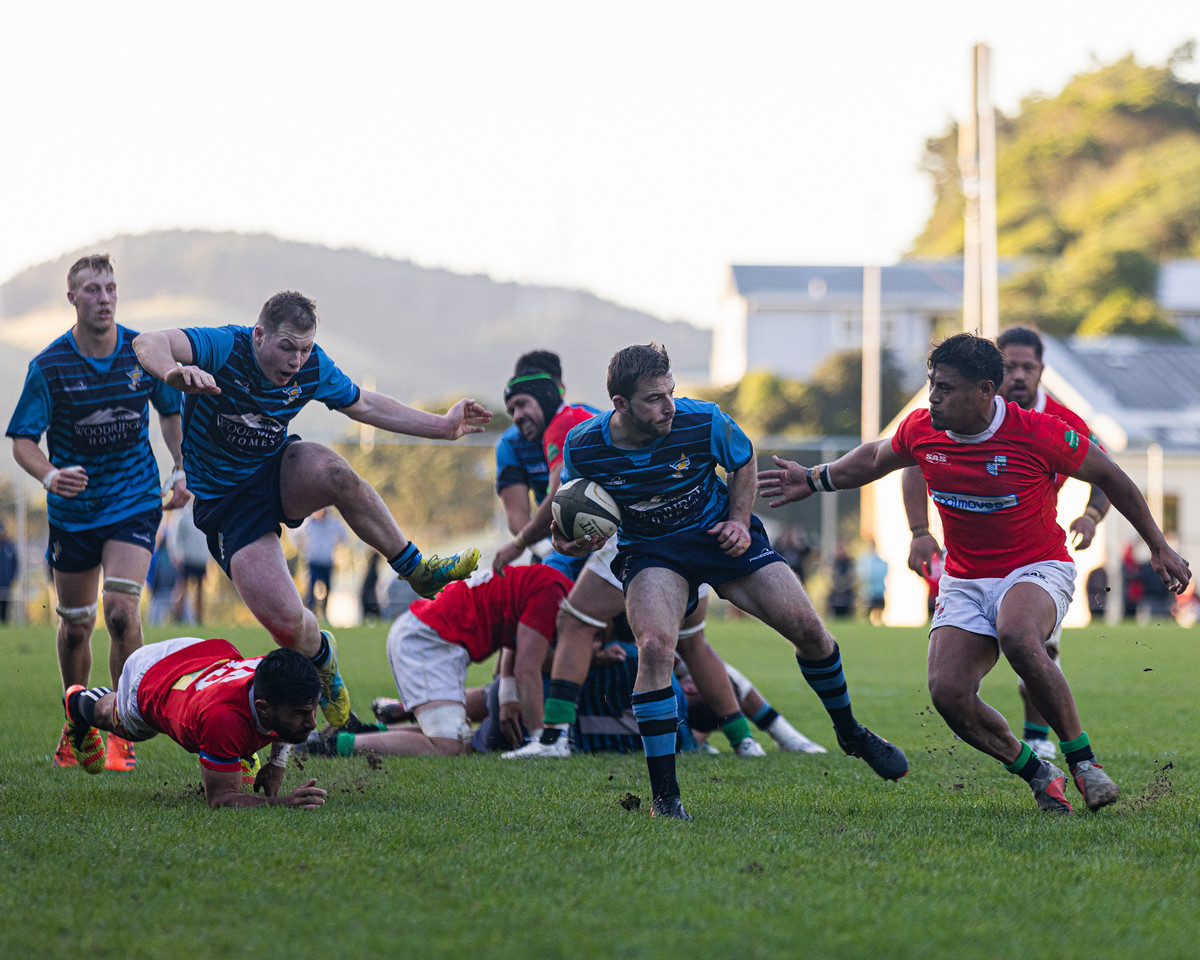 Results and scoring (as received) HERE

Petone are still the 2022 Swindale Shield leaders, but they lost their first match of the season today, going down 28-21 to Poneke in their F.J. Tilyard Shield fixture on Poneke’s Old Timers’ Day.

Poneke had led 18-11 at halftime, but in a match that had it all, Petone came back to level at 18-18 through a penalty try, before further penalties to each side set up the blockbusting finish.

At Nairnville Park, Norths were down 32-13 with 20 minutes to play following a length-of-the-field try to OBU first five Callum Harkin, steaming back to win with three converted tries to right wing Losi Filipo, No. 8 Luca Rees from close range and No. 8 Rees again at the end, to complete a hat-trick for the match.

Johnsonville moved into mid-table contention with a 36-33 win over Marist St Pat’s at home at Helston Park in a third close finish on a windy, but sunny day of club and college rugby around the Wellington region. Extended report of this match follows below.

In a fourth thriller, Paremata-Plimmerton marred Wainuiomata’s Old Timers’ Day with a 22-15 win at William Jones Park for the Smith and Wilson Cup.

Paremata-Plimmerton came back to win the match with two tries in the final few minutes.  Wainuiomata were ahead 15-10 heading into the final 20 minutes, following a second try of the match wing Niko Patelesio.

The next 15 minutes remained scoreless, before Paremata-Plimmerton fullback Esi Komaisavai crossed late and first five Zane Edwards converted to put them up 17-15 Right wing Blake Neve then sealed victory with a try in the dying embers.

Tawa bounced back from their underwhelming loss to Norths last week with a convincing 64-10 win for the Murray & Alan Mexted Cup over competition minnows the Wellington Axemen at home at Lyndhurst Park.

At Maidstone Park, the Upper Hutt Rams clicked into life, beating the Avalon Wolves 52-26 in their Harper Vine Trophy encounter. The Rams led 26-12 at halftime and then sailed home to win well.

The Rams went up 14-0 inside 10 minutes, through tries to No. 8 Toby Crosby and left wing Luke Bond, both converted by fullback Tynan Barrett. Avalon closed to 14-7 with a try to halfback Ezra Sione, but the Rams pulled further ahead with a double to second five Todd Svenson. This gave them a 26-7 after half an hour. Once more, the Wolves struck back through lock Neru Lafaele and the home side went into halftime leading 26-12. Both teams scored again soon after halftime, but the Rams were able to pull clear and had the game won with 10 minutes to play.

At the Polo Ground in the battle of the birds, it was the HOBM Eagles who defeated home team Oriental-Rongotai 22-12 for the Bondy Memorial Cup.

As reported above, Johnsonville beat Marist St Pat’s 36-33 in a Helston Park blockbuster.

Johnsonville took the lead in the second half and scored what was their winning try with about 15 minutes to play through centre Aukuso Tuitama. The Hawks followed this up with another two tries to extend their lead past two converted tries.

MSP first five Andrew Wells scored two consolation tries himself, the last on fulltime, giving his team two bonus points from the defeat. Wells finished the game with a hat-trick of tries himself.

Johnsonville went in to the second half trailing 20-7 at the turnaround, but the Hawks had two major advantages in their favour: the stiff wind and the dropping sun. The solar ball in the sky that MSP were squinting into would prove a major factor in the second half, at times even more so than the third advantage Johnsonville gained early in the second spell which was the sending off of MSP centre Ben Tuiatua. Tuiatua was red carded for an illegal tackle on Johnsonville fullback Jacob Walmsley. There was nothing malicious in this but it was illegal and referee Mexted showed him red.

Johnsonville soon struck back with their second try and first of the second half, going wide from a lineout 40 metres out, and left wing Marzy Karim scoring to make it 23-15, setting up the thrilling last 25 minutes.

Earlier, Johnsonville had scored the first try of the game, attacking from a scrum 60 metres out. Player of the Match halfback Sutton combined with openside flanker Dylan Selkirk to score the game’s first try to put Johnsonville up 7-0.

With the wind, MSP hit back with three consecutive tries of their own. The first try followed almost a minute of concerted phase play inside Johnsonville’s 22,  right-wing Isaia Petelo finishing. The second was scored by Wells, and the third try came off an attacking scrum under the posts, fullback Ryan Setefano injecting himself into the line and passing to the left wing Hansiene Pama.

MSP had their tails up as Wells also kicked a penalty to give his side a 13-point lead, but one that wouldn’t prove enough later in the match.

It was a popular win for Johnsonville, who have been playing well all season. MSP went into the match with 15 players injured or ill, also losing two players to injury and covid on the eve of this round.

Tawa held on to beat Poneke 32-27 to maintain their unbeaten start to the Premier 2 Division 1 Harper Lock Shield competition.  Tawa have now won all five games with bonus points

Ories beat the HOBM Eagles second side 21-12 to also remain unbeaten through five rounds, but two points adrift because of bonus points.

The early game at Nairnville was a cracker as well. OBU led 14-0 and 21-14 at the break but couldn’t shake their Norths opponents. Foreshadowing the events to come in the main game, the teams traded scores with the Goats leading 31-26 with only minutes to play when all sorts broke loose. Norths scored to make it 33-31, then OBU went downfield to take it back. The last minute went on for about seven, as OBU failed to clear the ball when given the chance and after a succession of penalties Norths went over. The conversion slipped past the post, leaving the pair on 38-apiece.

The fourth match of the Harper Lock Shield resulted in the Upper Hutt Rams beating the understrength MSP second side 31-15.

All three Division 2 fixtures went ahead today as scheduled, with Avalon extending their lead on the standings with their fifth straight win – but only just. Avalon edged Stokes Valley 24-20 on the latter’s Old Timers’ Day in their Roger Mildenhall Cup clash.

Petone are second after beating Johnsonville 52-23, while Wainuiomata defeated Paremata-Plimmerton 41-17 in the William Jones Park curtain-raiser.

In the Colts curtain-raiser at Helston Park, visitors Marist St Pat’s careened to a 74-29 win over the Johnsonville Hawks.

MSP opened the game up by racing to a 19-0 lead inside 15 minutes, scoring three straight tries from lineouts after using the wind in taking successful ’50-22’ kicks into the corner of Helston Park.

Johnsonville’s scrum went well in the first half, contributing to two tries in reply, cutting the lead to 19-12. MSP scored their bonus point try after a concerted build-up, but Johnsonville replied with their third to cut MSP’s lead to 26-19 with five minutes to go before the oranges. MSP then scored twice more before the interval to pull ahead.

Now playing goldie-oldies scrums in the second half, much of the sting was taken out of Johnsonville’s game and MSP went further ahead with three more tries, to sail past the half century mark. The game opened up fully at this point and the tries kept coming to the end from both sides.

Four of the other Colts matches were high scoring affairs as well. The Tawa Colts clicked into life, beating Avalon 66-29, Petone beat Poneke 59-14 and OBU Green beat the Wellington Colts 40-15. Wainuiomata and Paremata-Plimmerton met in the other Colts game.

The Upper Hutt Rams and Stokes Valley are both unbeaten on 23 of a possible 25 points after five rounds of the U85kg JC Bowl.

In other results, the OBY Scallywags won their fourth math by beating HOBM 45-6, Johnsonville blanked Wellington 48-0, Poneke beat MSP 53-7 and Eastbourne beat Petone 28-7 in the Battle of Seaview.

A nine-team First XV Premiership has been confirmed starting next week.

Aotea College, Bishop Viard College and Hutt Valley High School have all declined to take up spots in the top competition.

One thought on “Close wins for Poneke, Norths, Johnsonville, Pare-Plim in eighth round matches”