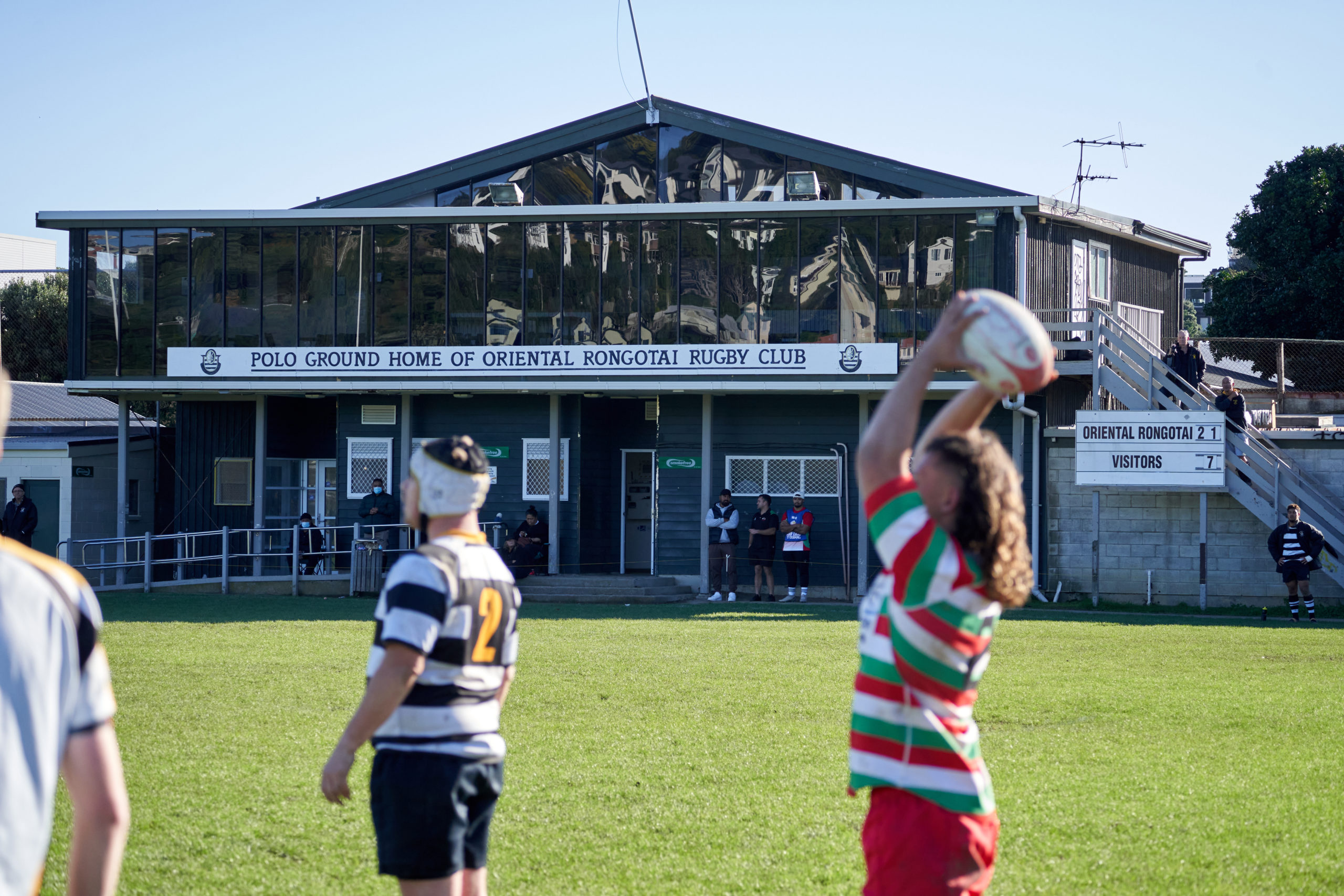 Above: Action from the Polo Ground, with the clubrooms as the backdrop. PHOTO: David Brownlie.

Morning edition: Work commences tomorrow on a significant upgrade of Polo No.1 drainage and turf. A comprehensive drainage system is being installed then the field is being re-sown and with a state-of-the-art seeding system being used Polo No.1 will be as good as any field in Wellington. ‘Water Polo’ matches like the one last July against Tawa will be a thing of the past. For the rest of the season all Ories games will be on Polo No. 2.

It is a long-term goal of Ories and the Miramar Softball Club to have one lounge area upstairs and for the existing Ories clubrooms to revert to a gymnasium which it originally was from the pavilion’s construction in 1959 until its change in 1978 to a clubrooms for Ories. The budget is $2,000,000, of which the clubs have raised a considerable amount. Work was originally scheduled to commence in April but with hold-ups in the construction industry a new start date is yet to be confirmed.

The Wellington Premier Swindale Shield competition is eight rounds in and just five to go before a first round champion will be crowned and the Jubilee Cup knockout rounds contenders are found.

It is a possible six games to go for the HOBM Eagles v Johnsonville teams, with their previously abandoned Covid match status seemingly in a state of limbo. It would be good if this was resolved one way or another, so those teams and players involved and around them on the points table (which is most teams given the tight nature of the competition this year) can have some clear picture where they stand heading into the business end of the competition.

There are also some juicy lower grade matches coming up, such as a top-of-the-table Premier 2 fixture between Tawa and Ories, and the previously stalled women’s Division 1 competition gets underway (more on that below).

The week starts on Wednesday with school rugby, with Wellington College versus St Pat’s Town opening the Premiership First XV competition at Wellington College. The match is part of their full sports exchange, also including golf, basketball and football. Kick-off is 12.15pm.

There is also rugby at Porirua Park on Wednesday, the opening round of Premier 1 and 2 schoolgirl games and the opening Beard Trophy fixture of the year at 6.00pm on the JCS between Mana College (holders) and Tawa College (challengers).

Apart for the WC-SPC game on Wednesday, the College Premiership kicks off on Saturday following the completion of qualifying. It will feature nine teams, with Upper Hutt unable to take their place as they are a composite team with students from Heretaunga College and four other schools declining the offer to replace them.

Playing for Newlands College 1st XV vs Onslow College 1st XV, this is one of Ngahau Te Paa's four tries on Saturday. Newlands won the traditional fixture 42-41. He also kicked 7/7 from the tee. pic.twitter.com/DkMC7xtujE

Confusion reigned on Friday with the Women’s competition. It is Club Rugby‘s understanding that this past weekend was initially marked as a reserve one in case of significant disruption due to Covid with the championship round to commence on the 28th, however the union decided to proceed with the latter a week earlier than initially planned. It is also understood that on that basis, several players had made commitments elsewhere and some teams – particularly Ories – were left short of players, leading to the first-round of the Tia Paasi Memorial being pushed back to this coming weekend.

Michaela Blyde became just the third women after Portia Woodman (205) and Bianca Farella (157) to score 150 tries on the World Sevens Series when she scored two tries in the Black Ferns 24-14 win over Fiji in the semi-finals of the Toulouse Sevens last week.
In the final she pulled off a potential match-saving tackle in the final play, dragging down Australian captain Charlotte Caslick from behind. The Black Ferns Toulouse triumph was their first tournament success since winning the Olympic gold medal in July 2021. The Black Ferns 7s have won 34 of their last 35 games. Their scores in Toulouse in order from three pool games to the finals were: Scotland (45-0), Spain (29-0), Canada (17-0), Brazil (41-0), Fiji (24-14) and Australia (21-14).Australia led 14-7 at halftime in the final, but the Black Ferns held them scoreless in the second spell and scored two tries to Alena Sail and Kelly Brazier.

A try on debut off the bench for Estavaan So’oialo (above, photo by Stewart Baird) at Tawa on Saturday in their 64-10 win over the Wellington Axemen. Like his father, Steve So’oialo, he is normally a halfback but can plug any hole in the backs. He has been at the club for three years, playing Colts and this year Premier Reserves. But made his Premier debut on Saturday and celebrated with a try.

A couple of big shifts from a pair of OBU Goats on Saturday. Flanker Harry Bampton – who is rapidly acquiring cult-hero status amongst the herd – backed up a 40-minute stint with the Premier 2 side with 75 minutes for the Premiers after being called off the bench as a 5th minute injury replacement, while Premier 2 captain and lock Conor McLean played the full 85 minutes of their draw before another 25 for the top team.

Former Wellington College and OBU Green Colts player Flynn Crampton made his Premier debut on Saturday, becoming the 22nd debutant for the Billygoat this year. So an entire team of new players in the first eight weeks of the season.

The sun at Helston Park this time of year is vicious. In the second half it dips over the northwestern horizon and not only are hats/sunglasses necessary for the spectators up high, the players just about need them too. Billy Wallace famously played in a sun hat in matches throughout the 1905/06 Originals All Blacks tour.

Any updates on the Billy Wallace Best & Fairest Trophy?

When rugby squads get named, but no captain is named, and players are grouped together by position with no explainers. For instance, a ‘Loose Forward’ can be a specialist in one of three of different specialist positions, adaptable to two of the three or a jack of all trades, so at least five different variations of ‘Loose Forwards’.

Four tries and an assist and some more nice touches by MSP Colts centre Jack Boylan in their 74-29 win over Johnsonville in the Helston Park curtain-raiser on Saturday. MSP won 12 tries to five, after scoring the game’s first three tries by taking “50-22” kicks into the corner and attacking from lineouts close to the line.

Four tries for Kienan Higgins for his Taradale side in their 53-3 account of Central in Hawke’s Bay club rugby on Saturday. He is now the joint leading try scorer in the Nash Cup with 8. A try and three conversions for Sheridan Rangihuna for Napier Tech in their 35-21 win over Hastings. He is the leading points scorer in the Nash Cup with 81. Napier Tech are unbeaten and first and Taradale are second on the standings.

Du Plessis Kirifi celebrated his 50th game for the Hurricanes. He was jobless until he met the coach of the occasionally unscrupulous OBU Scallywags.

A reader asks before Saturday when was the last time Johnsonville beat MSP in a Premier match? Dear reader, In 2002 the two teams drew 13-13. In 1997 Johnsonville beat them 17-12, and possibly in 1998 but we don’t have that season’s records. For several seasons in the early to mid 2000s Johnsonville were in the second tier/Harper Lock Shield so they two clubs’ top teams didn’t meet in those years.

A blustery day in Taupō for the first day of the Super Rugby Under 20 tournament. A prism into the future! The hopeful Hurricanes beat a somewhat haphazard Blues outfit 35-27. The Barbarians lived up to their free-spirited name, dispatching the hapless Highlanders 43-24. Some of their tries might well turn up on YouTube (or here, see below). The Crusaders had a jammy 32-31 victory against the Chiefs. The last scrum was ruthless!

Nikora Broughton, son of MSP and Wellington Lions midfielder Norm, with the clever kick to set up this try, as the Barbarians beat the Highlanders in their opening Super Rugby U20s. The No. 8 is out of Hato Paora College and plays for Bay of Plenty.

For the Hurricanes U20s, Sione Halalilo had a busy game, as did hooker Raymond Tuputupu. Captain Riley Higgins was all class in the midfield. Cooper Flanders was impressive at openside flanker, considering this is his first year out of school. Left wing Isi Saumaki made some really good barnstormering runs. He might not be exceedingly fast, but he has good feet, and really strong. The whole starting tight five were really good. Bradley Crichton, Tuputupu and Siale Lauaki are strong, mobile, skilfull and fit Replacement halfback Sam Howling looked really looked sharp, with quick passing and good decision making. Peter Lakai missed the game as he came down with the flu.

Meanwhile, in Spain the Classic All Blacks were in action.

The Classic All Blacks beat Spain 33-26.

The World Rugby Council has approved a global trial limiting the opportunity for non-playing personnel to enter the field of play during a match. Operational for all competitions and stand-alone matches starting after 1 July 2022, the trial aims to improve the flow of matches by reducing unnecessary stoppages without compromising welfare.

The trial follows an extensive review by the international federation of the current elite rugby environment, including research into player hydration needs, and increasing disruption to play caused by multiple water carriers entering the field of play every time there is a stoppage.

The new trial for non-medical personnel sets out a revised protocol for when medics and water-carriers, can access the field of play, limiting the ability to interact with the match officials, and providing a sanctioning framework for any action that that either interferes with play or is against the values of the sport.

The aim of the trial is to improve the flow of the game, reduce the opportunity for potential interference, enhance the spectacle for fans and support match management by match officials.

Our weekly Monday column is a collaborative one, so any news, information, tidbits or contributions are welcome. Please email editor@clubrugby.co.nz or find us on social media and send a message.