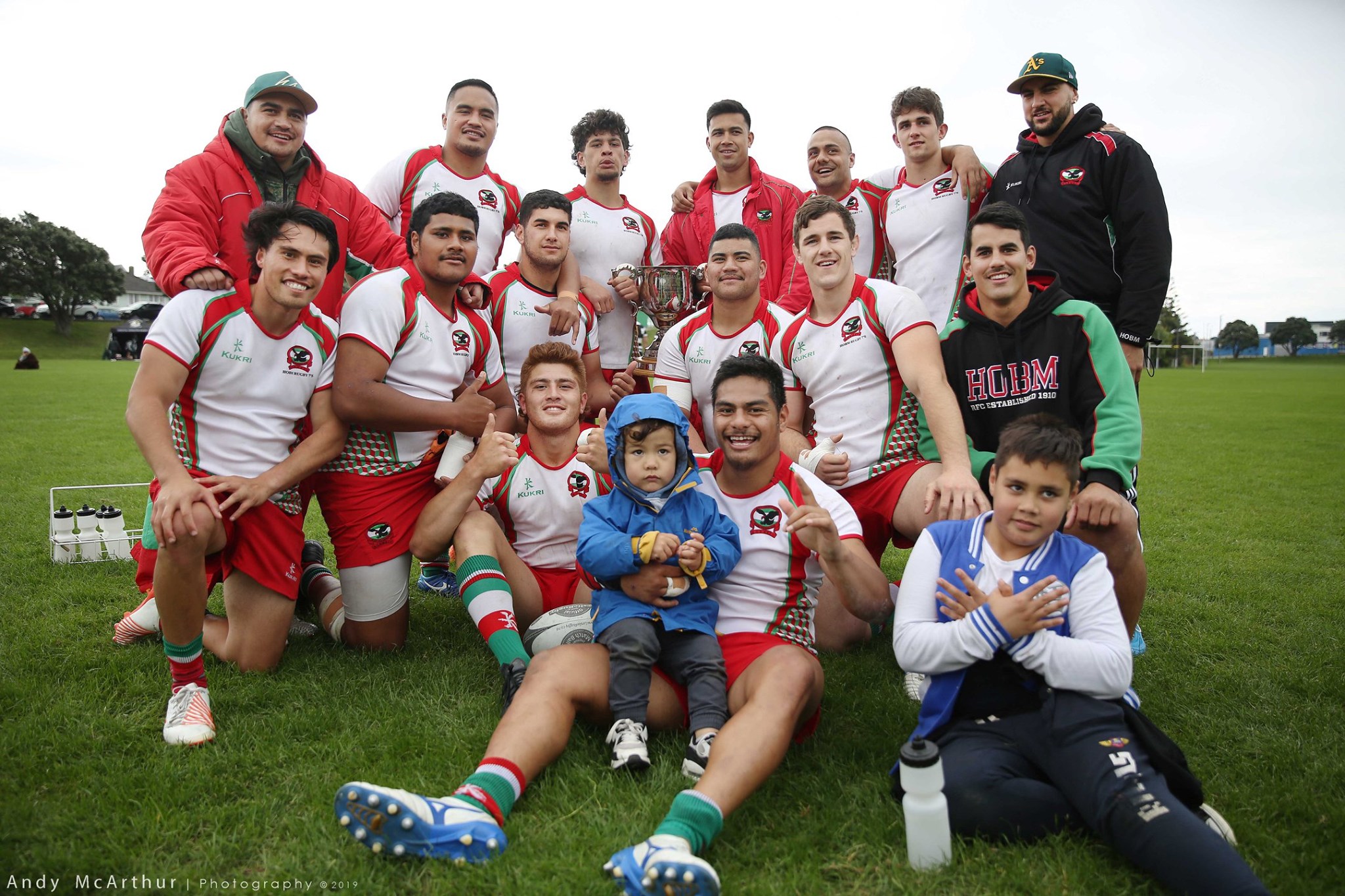 Above: The HOBM Eagles warm up ahead of one of their games on Saturday – they went on to win the Men’s tournament. Photos by Andy McArthur HERE

There are two more weekends of rugby to come in the Wellington region for the rest of 2019. Despite no presence at the just completed American Ambassador’s WRFU sevens series, indications are that this coming Saturday’s Piri Weepu Invitational 7s tournament is going ahead at Wise Park, Wainuiomata. More details to come.

The following weekend is the first of the representative tournaments, the WRFU-hosted warm-up tournament, which was at Rongotai College last year. This is followed by the the away Counties Manukau 7s tournament and the Central Region 7s in Levin, building up to the Sevens Nationals in Tauranga in mid-December.

Both Northern United teams made slow starts to Saturday’s second and final leg of the American Ambassador’s series played in their own territory at Onepoto Park. The Norths women defaulted their first game owing to a lack of numbers early in the day, while their men lost to Ories 19-5, which could have cost them a place in the final and the series title.

Norths met HOBM in the semi-final, which in effect was a virtual final for the American Ambassador’s Cup. After some confusion at the end as to the exact fulltime score, HOBM were awarded the win 19-17, thus winning the series with the final to spare as Norths were now on 33 series points and HOBM 34 (later finishing on 37 when they beat Ories in the final).

This was HOBM’s first American Ambassador’s title since 2014, when they won it on Evans Bay Park. Interesting, that day they beat Poneke (21-17) in the quarter-final, MSP (19-17) in their semi-final and Wainuiomata (35-21) in the final. Of note, Lise Soloa, Fereti Soloa, Chase Tiatia and Sheridan Rangihuna were all in the Eagles team that last won in 2014 and also in this year’s winning team.

This was Old Boys University’s Women’s first title. They won both tournaments.

Playing numbers continue to be a big worry, with most teams significantly stretched. By the end of the day something of a player bartering market was in use, particularly in the women’s competition where loan players were traded between the teams. In the men’s competition, such players as Toby Robson (Poneke) and Peniasi Tokakece (Tawa) were called to action to play.

The Tawa rugby football Club is seeking applications for the role of Game Development Officer.

The TRFC has a proud tradition of success in wellington club rugby and is looking for a person to continue the club’s development.

The successful candidate will have:

Ideally the candidate will be an experienced coach or player with a good appreciation of the technical and tactical aspects of the game of rugby.

This is a full time role and the candidate will be required to work with the Tawa Rugby Club’s players, coaches and administrators as well as WRFU staff and other clubs’ GDOs.

Applicants should forward their CV to Dave Banks, chairman by email to dave@montagenz.co.nz. A copy of the job description is available on request.

NCEA exams have started around the country.

What about the least educated All Blacks team? The all-time one would be coached by Fred Allen, who never went to secondary school.

Or the most qualified All Blacks team? Lawyers, doctors, Rhodes Scholars would all be in the mix.

In October, the New Zealand Amateur Sport Association Inc. undertook a nationwide on-line survey to learn more about the current state of Sports Clubs in New Zealand, in partnership with the Sport Leadership & Management Department at Auckland University of Technology (AUT).

The survey received responses from more than 750 clubs across 75 sports, representing all corners of New Zealand

The Association would like to invite you, or a representative of your Club, to attend a 90 minute seminar where we will discuss some of the key outcomes arising from the survey.

Attendees will leave with some ideas that we hope will help their Club succeed in 2020 and beyond.

A number of Wellington Club rugby players playing around the world. Here are two examples:

?? Valentine Meachen has headed to Italy to play for Rugby San Donà in the Peroni Top 12! He had his first game last weekend and as you can see in the photo he has brought his trademark defense! #RedMachine #PeroniTop12 #ClubMen #iBleedRED

The Super Rugby squads are revealed this week.

Aaron Cruden to the Chiefs – who will be first five-eighth for the Hurricanes?

Below: Murphy Taramai is looking forward to returning home:

The last time I played at this stadium it was for the @bluesrugbyteam , who would’ve thought I’d be coming back to represent my home province @hurricanesrugby Huge couple of years there, creating memories and playing alongside some of the greats ⚪? Footy is a hell of a ride and I’m looking forward to this part of our journey and joining a new group of brothers here in Wellington ?? #we’rehome ?

Big salary cap scandal in the UK at present involving champions Saracens. Will they be sacked from the competition?

Below: The Dominion Post Monday morning after another busy weekend of sport  – Football Times?

Big wins for Petone and Poneke as opening day sizzles