Skip to content
You are here
Home > Club Rugby > Highlights and report: Wellington and Manawatu draw in NPC pre-season 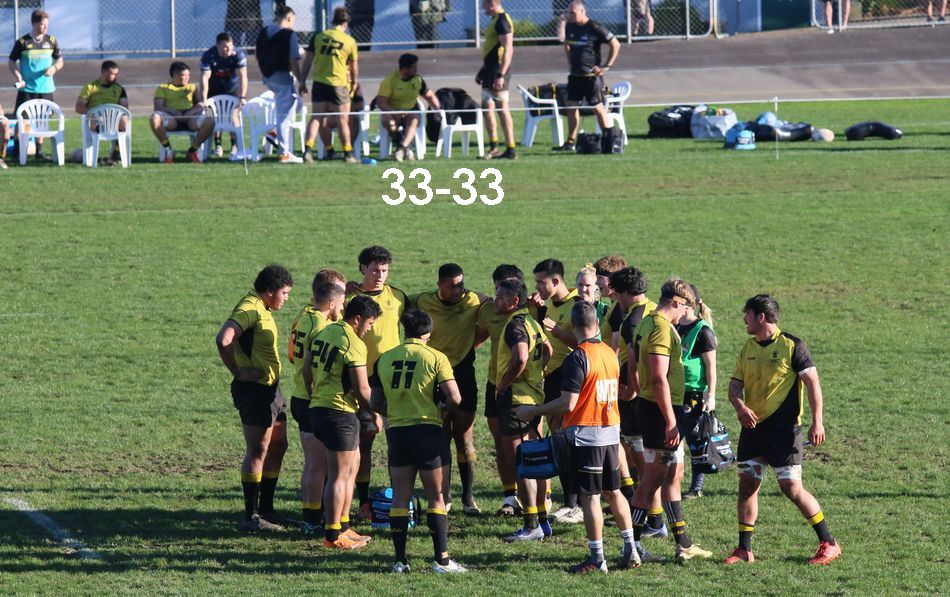 The Wellington Lions and Manawatu Turbos squads drew 33-33 in their National Provincial Championship pre-season fixture in perfect rugby conditions at the Levin Domain on Friday afternoon.

Try scoring highlights and account of the match below:

The Lions XV scored what was should have been the match winner several minutes before fulltime when fullback Tomasi Alosio sliced through a gap in open play after running back an aimless kick and his Hutt Old Boys Marist teammate and replacement first-five Brandyn Laursen slotted the conversion to give them a 33-26 lead.

But with the final play of the match, Manawatu and Feilding Yellows centre Josiah Marakau was fed a perfectly timed pass on his inside from second five James Tofa from a scrum 60 metres out and ran clear to score under the posts to score a converted try to lock it up at 33-33.

The try was Marakau’s third try of the match, after scoring both his team’s tries in the first half, giving them a 14-12 halftime lead.

Earlier, Wellington had scored the opening try of the game, after a Manawatu breakdown in midfield that was kicked ahead by Lions second-five Peter Umaga-Jensen, that forced an attacking lineout that caught Manawatu napping as they threw quickly and first-five Ruben Love flung the ball out to the waiting Pepesana Patafilo for the try.

Both side’s missed opportunities to score over the next period, Manawatu first-five Brett Cameron twice making a hash of kicks for the corner for lineouts, and Wellington stringing some long periods of possession together but unable to finish. A knock-on in the corner and a forward pass near the line among these chances.

Marakau rushed up in defence in centre field near halfway  and burgled a Tomasi Alosio pass and showed a clean pair of heels to score an intercept try. Manawatu then scored a top drawer try after a burst by OBU flanker Shamus Hurley-Langton, who linked with Cameron and then on to Marakau to dot again and make it 14-7.

With the last play of the first half, Wellington turned the ball on near halfway and second-five Umaga-Jensen finished off an attacking raid up the far side to score Wellington’s second try to cut the lead to two by halftime.

Wellington made changes at halftime, including introducing TJ Perenara to halfback. A forced change soon after saw the departure of starting centre Billy Proctor to injury.

Manawatu were the first team to score in the second half, capitalising on turnover ball and scoring a well taken try on the counterattack to left wing Tima Fainga’anuku, also involving former Petone halfback Logan Henry. This put the Turbos up 21-12.

Wellington replied straightaway, regaining possession from the kick-off and blindside flanker Taine Plumtree galloped through from close range to cut the Turbos’ lead to 21-19.

Plumtree, in his first game back since leaving the field injured in the opening minutes in OBU’s Swindale Shield win over Tawa at home a few weeks ago, had an impressive and industrious game and pressed this claims for a starting berth in the NPC team. Plumtree and captain and openside Du’Plessis Kirifi were both among Wellington’s best in this fixture. No. 8 Keelan Whitman and lock James Blackwell were also busy performers for Wellington.

Wellington’s concentration lapsed again and Manawatu won another breakdown penalty, kicked for the corner and the forwards drove over for a well-executed try. This now made it 26-19 to Manawatu.

Wellington strung together another long passage of play and this paid off and Patafilo was handed the final pass and ran in to score his double. The conversion made it 26-26.

Alosio put Wellington ahead with his next try, but Marakau had the final say for the Turbos and the teams were all square on fulltime in the Horowhenua township.

The match did not carry first-class status.

Next weekend, the Wellington Lions open their NPC campaign against the Northland Taniwha at home at Wellington Stadium on Saturday night, while the Turbos host Counties Manukau on Friday night at Arena Manawatu.

The Wellington squad for this match was:

From the vault: FIFTH round matches in images