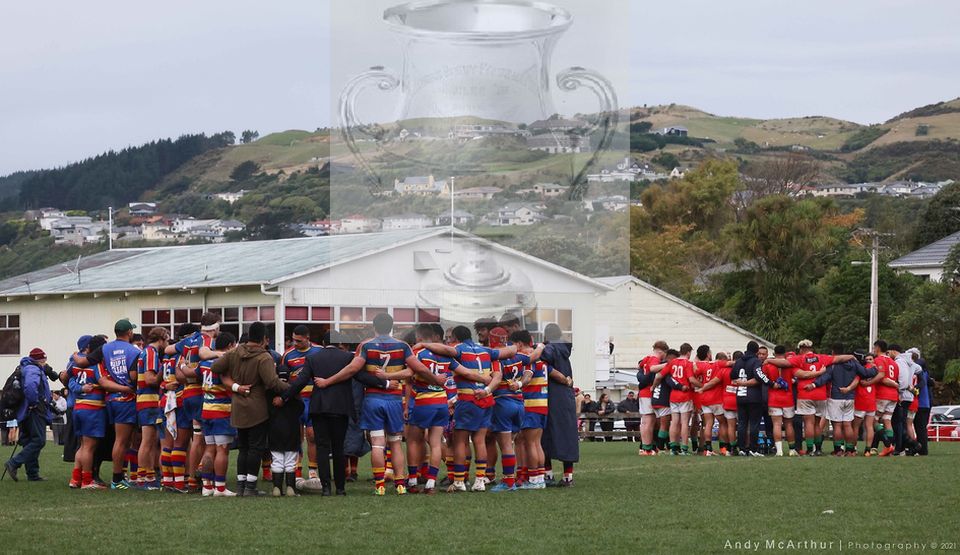 The big day has arrived, and the roads lead to the Hutt Rec for tomorrow’s Premier, Premier 2, and Under 85kg finals. The weather in recent weeks has forced a shift from the original venue across the river at Petone, but indications are that the replacement venue – and particularly the #1 ground – is in good condition and with favourable weather in the forecast it should be a fitting end to the year.

With the new format the final seems to have come around quickly without the lengthy buildup of the traditional Jubilee round-robin that existed before last year. But that will be of little concern to Marist St Pats and Tawa when they take to the Hutt Rec tomorrow afternoon in a repeat of the 2016 decider. They meet after triumphing in last weekend’s semi-finals; MSP pulled away from Norths in the second half at Evans Bay to win 48-26, while Tawa used a fast start to end Hutt Old Boys Marist’s season on this same ground, winning 29-18.

MSP finished second in the Swindale, winning 11 of their 13 matches and were tied at the top with Old Boys-University on 56 points but missing out on the silverware due to their 18-20 loss to the Goats in a game regrettably better remembered for other events and one of a number in a tumultuous season. Their 532 points and 79 tries scored in the Swindale were both tops in the grade – led by James Proctor (90) and captain James Tuiatua (12) respectively including the playoffs – while their 168 points conceded was equal with OBU as the fewest. They beat Oriental-Rongotai in the opening round of the playoffs that meant they avoided the horrendous weather a fortnight ago before that win over Norths.

Tawa came home sixth in the Swindale, limping home with three losses in the final four weeks. But they’ve thrived in the playoffs, beating Petone in the first-round, then Ories on the Polo Ground swimming pool, and finally HOBM a week ago. Their 403 points scored and 57 tries in the Swindale were both fifth, while their 233 points conceded was third best. Including those playoff matches Kemara Hauiti-Parapara is their top points scorer with 97, and hooker Lotu Nuku leads with ten tries. Tawa also have one edge as they’re one of only two teams to beat MSP this season, winning 27-23 back in round eight.

MSP have two changes from last Saturday. Keelan Whitman is ruled out through representative commitments and replaced at No8 by Ryan Dafel, while veteran Ryan Setefano comes onto the left wing for Rez Tasele, who drops back to the bench. Tawa have just one change from the side that started against HOBM, and its an enforced one with Elijah Fonoti coming onto the wing in place of Maui Wallace with veteran Randall Bishop moving to fullback. There is one change on their bench, with Afa Afa who was outstanding for their second side last week, joining it.

Each side will have players missing through suspension. MSP are without Isaia Petelo following their match against Oriental-Rongotai two weeks ago while Ben Aumua-Peseta misses out for Tawa after it was determined that he, and not rookie Lipa Saveatama, was responsible for the incident that saw the latter sent off last Saturday. In addition to Whitman, MSP’s Vince Sakaria and Tawa’s Pepesana Patafilo are also absent owing to representative duty.

Both also have a handful of players returning from the 2016 final. For MSP that contingent comprises Valentine Meachen, Josh To’omaga, and Ryan Setefano, while Ken Kapeli came off the bench that day and starts tomorrow. Tawa have Sitiveni Paongo, Lotu Nuku, Hemi Fermanis, Kemara Hauiti-Parapara and Randall Bishop while like Kapeli, Folau Vea starts after being on the bench five years ago. If not for other reasons, Petelo, Sakaria, and Patafilo would also be in that group.

As with any final there’s a number of matchups to watch. The contest at scrum time between MSP trio Meinrad Fitisemanu, Meachen, and Tui Tuiatua and Tawa’s Paongo, Nuku, and PJ Sheck could set the tone, as might the scrap in the loose between MSP’s abrasive captain James Tuiatua and Tawa’s young tearaway Weston Sao. In the backs there’s the matchup of veteran (by club standards) halfbacks Kapeli and Hauiti-Parapara and their partnerships with James Proctor and Luke Cummings respectively, and the two old heads at the back in Andrew Wells and Bishop.

Jack Sargentina will take charge of his first Jubilee Cup final after refereeing last year’s Hardham Cup decider. It is his 36th Premier match in all and he also refereed that earlier meeting between the sides. He’ll be assisted by experienced duo Jamie Fairmaid and Daniel Mangin, who were the referees of last weekend’s semi finals.

Two of the region’s oldest clubs will face off in the prelude for the Hardham Cup when Petone (formed in 1885) take on Poneke (formed 1883), with both looking to take something from a season that hasn’t met the expectations they had back at the outset. Both sides come in on the back of emphatic semi final victories; Petone were much too good against a disappointing Johnsonville, while Poneke delivered perhaps their best performance of the season to oust Hardham-holders Wainuiomata away from home at William Jones. Petone finished 7th in the Swindale and were ousted from the Jubilee Cup by Tawa before beating Paremata-Plimmerton ahead of their semi final, while Poneke were ninth and beat Pare-Plim and Wellington in the earlier rounds of the Hardham playoffs. You have to go back to round two of the season for their previous meeting this year, where the Villagers narrowly prevailed by 18-17.

Petone get both Tupou and Zeke Sopoaga back after their recent appearances for the Cook Islands and both go straight back into the starting side for Samuela Kurusiga and an unwell Jacob Gooch, while in the backs Richard Evans makes way for Mason Henry. Lock Dylan Williamson captains the side in Gooch’s absence.

Poneke make just one change to that side from last Saturday with hooker Andrew Jones suffering another injury. He’s replaced by Moses Galuvao with Charlie Siale coming onto the bench. Pakai Turia delivered a masterclass in his 100th start last Saturday and the Best & Fairest contender will be looking for another, and will be one of four club centurions starting tomorrow alongside Greg Foe, Galu Taufale, and double-centurion Ben Huntley.

The referee for this one is former Paremata-Plimmerton Premier player Ryan McLean, who took charge of the College Premiership final two years ago. It will be his 21st Premier match and his assistant referees will be Matt Thomas and Tomas Roche.

Hoping to set the tone for their Premiers will be Tawa, who will have the motivations of not just claiming the Harper Lock/Ed Chaney double, but to go undefeated on the season to do it. They’ll face the challenge of Hutt Old Boys Marist, who have the unexpected bonus of getting to play the final at their home. In last week’s semifinals Tawa were made to work by the Upper Hutt Rams before pulling away to win 38-20, while just up the road HOBM headed to Porirua Park and came away with a 25-24 win to end Norths Blue’s season.

Tawa were crushing 63-3 victors in their first-round meeting, though it was a closer 40-24 margin in their second six weeks ago.

Promising young referee Charlie Harris will have the whistle, and he’ll be assisted by John Ballingall and Scott Marriner who had last weekend’s semifinals.

For the first time, the lightweights get a place alongside the big boys on Finals Day with both division finals being played on the #3 ground.

The championship Division 1 Paul Potiki Memorial Shield decider gets underway at 2:20pm between the top two qualifiers from the round-robin phase in Avalon and Johnsonville after they progressed from a pair of wild semi-finals last weekend. Avalon were on the verge of elimination at the hands of valley rivals the Upper Hutt Rams trailing 3-21 deep into the second half before a furious comeback saw them win 22-21, while Johnsonville led 21-3 over first-round winners Eastbourne early, but had to hold on as the Gulls fought back before prevailing 38-32. The Wolves have prevailed in both meetings this year and held the Hawks tryless in each, winning 33-3 and 15-9 with the second having doubled as their National Knockout fixture.

Avalon were last winners in 2019 and beaten finalists in both 2017 and 2018, the latter the epic extra-time decider with Upper Hutt. Johnsonville last made this final in 2016 where they were beaten by Tawa.

Before that however is the Division 2 Tony O’Brien Shield final, which will likewise be played between the top qualifiers. The OBU Scallywags – spiritual successors to the former Bunnies and Spartans sides – will take on former grade champions Wellington from 12:20pm. To reach this point, OBU beat HOBM 38-24, while the Axemen came out on top against Stokes Valley for the second time in a week by 23-19. It’s also been near impossible to spilt the two in their meetings so far; OBU won their JC Bowl encounter by 19-17 with their round-robin clash finishing 17-all.

A pair of up-and-coming referees have the two finals. Jack Trevella will control the Division 1 final and Danny Cameron in charge of the Division 2 match.

In the event that any final is drawn at fulltime the the following applies:

Away from the spotlight of Finals Day, the second-tier of the Premier 2 competition are into their playoffs with this weekend’s quarterfinals. Three of the four matches are in the Hutt; top-qualifiers Wainuiomata (1) host Petone White (8) at William Jones, Petone Blue (2) are at home on the Rec against Avalon (7), and Stokes Valley (3) take on Paremata-Plimmerton (6) at Delaney in the usual late kickoff time. The fourth match is at Porirua Park where Norths White (4) face Johnsonville (5).

With the school holidays over, College rugby returns in full tomorrow. In the Premiership there are just three matches on, with the possibility that the four playoff teams could all be found with a full round to go. Silverstream’s (32) 18-12 win over Town (26) on Wednesday in their annual Traditional contest sees them move into second for now, while leaders Scots (39) ensured that they will be top qualifier after easing past Porirua (5) 90-12 yesterday afternoon in what also doubled as a Coed Cup semi-final. Two of tomorrow’s matches are on opposite sides of Porirua Harbour with Mana (16) at home against Rongotai (14) on the western shore while over on the east Aotea (1) again go looking for their first win when they host St Bernard’s (12). The third match is in the city where Wellington College (28) take on Hutt International (17), where College will look to reclaim second while HIBS need to win to keep their playoff hopes afloat.

In Premier 2 leaders Upper Hutt (35) head south to face the St Pats Town 2nds (12) at Evans Bay, the second-placed Silverstream 2nds (29 host bottom-side Naenae (3), and there’s a midtable stoush on Mt Victoria’s northern side between the Wellington College 2nds (20) and Tawa (14). The other two matches are up the coast as Wairarapa (25) makes the long haul from Masterton to face Kapiti (12), and Paraparaumu (11) take on Bishop Viard (21).

The next fixture at this level is Wednesday night at Porirua Park, with Mana and Scots facing off for the Coed Cup crown and with it the Wellington berth in the Hurricanes region playoffs towards the National Top Four.

The Wellington Lions drew 33-33 with Manawatu in Levin this afternoon, ahead of them opening their NPC campaign next week.

The Pride hit the road this weekend, heading south to face competition favourites Canterbury in Christchurch.

“Radio: the pictures are better”