Skip to content
You are here
Home > Club Rugby > UPDATED: OBU on top of congested points table in Swindale Shield 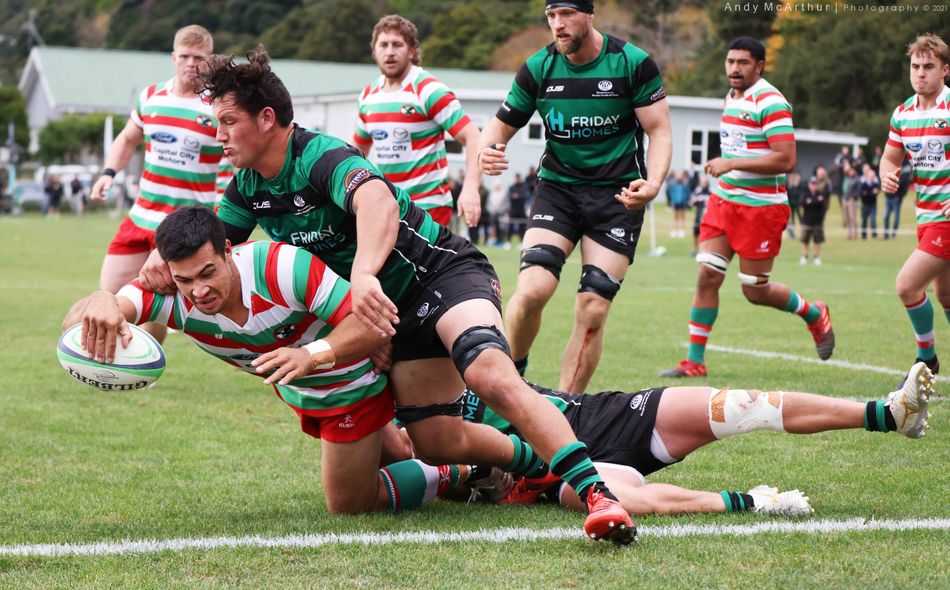 Brandyn Laursen scored for HOBM against Wainuiomata on the latter’s Old Timers’ Day. The Eagles won 30-28.

Old Boys University are left standing as the only unbeaten team of the Wellington Premier Swindale Shield competition, beating Marist St Pat’s 20-18 in their top-of-the-table match at Wellington College on Saturday afternoon.

OBU retained the Bill Brien Challenge Cup and won back the Jack Lamason Trophy with a try on fulltime to second five-eighth Izzy Foai, converted by fullback Sam Reid.

Foai handled twice in the build-up to the winning try, first crashing it up from an attacking scrum and offloading a bobbled pass to a player in support, and then, following a series of determined pick and drives at the line by the forwards, scoring under the posts amidst passionate scenes from players and supporters alike for the equalising try. Reid’s conversion from in front of the cricket pavilion went over and the Goats won.

OBU had come back from 18-10 down just a few minutes earlier, with first a Reid penalty from 40 metres out and then the try at the end of a drawn out second half.

MSP had broken a 10-all deadlock with about 10 minutes to play when first five-eighth substitution James Proctor had busted the line and passed inside to second five Isiah Petelo. After a couple of misses by Aidan Morgan, Proctor then kicked a penalty to perhaps give MSP breathing space.

Both teams had scored a try apiece in the first half, with Shamus Hurley-Langton crossing for OBU first and starting MSP fullback Andrew Wells scoring a popular try after a Morgan cross-kick that Wells reined in and sprinted 65-metre to score.

A Morgan penalty put MSP up 10-7 at halftime, while OBU also lost Jonathan Fuimaono to injury late in the first half. MSP’s forwards muscled up in the second spell but couldn’t quite do enough for victory.

OBU lead the Swindale standings on 22 points, to joint second placed MSP and the Upper Hutt Rams on 20 and Petone just back on 19.

The Rams pulled clear of the spirited Axemen in the second half, while keeping their line intact to the end.

At Helston Park, the Petone Villagers were made to work hard for their 24-12 win over Johnsonville.

An early penalty to Hawks halfback Mark Sutton was answered by a converted try after a quick tap to Petone fullback Richard Evans.

A stop-start first half saw Petone score their second try from a penalty in to the corner, lineout drive and try to second five Regan Waiwai. This made it 12-3 after about 35 minutes.

Johnsonville then lost two players to the sin-bin before halftime, the second of these offences for an intentional knock-on resulting in a penalty try and a 19-3 lead to Petone at the interval.

Sutton opened the second half scoring with a penalty to close the gap to 19-6. Another Sutton penalty soon after made it 19-9.

Both Johnsonville’s sin-binned players returned to the field with no further damage to the scoreline for the next stanza of play.

Petone then sealed their win with their bonus point try with about 15 minutes to play, with replacement hooker Luke Flett coming up with the try from a lineout drive.

The only further scoring in the match was a fourth Sutton penalty as play wound down to fulltime.

Ories and Tawa occupy fifth and sixth on the points table, with big wins.

At Lyndhurst Park, Tawa beat Poneke 49-29 on their Old Timers’ Day, for the Kevin Carmichael Cup.

Tawa led 19-3 by midway through the first half and 27-3 at halftime, scoring four tries and all four coming off turnover ball including their second and third tries off dropped Poneke ball in centre field and runaways.

Their first try was a direct result of a turnover penalty from a Poneke loosehead scrum neat the visitors’ 22. Tawa kicked for the corner and hooker Lotu Nuku came up with the try from the lineout drive.

Halfback Kemara Hauiti-Parapara and fullback Randall Bishop scored tries started from turnover ball on their own side of halfway. Hauiti-Parapara scored a first half brace after Poneke turned their own attacking lineout ball over and Tawa counter-attacked the best part of 80 metres for the try in front of the clubrooms.

Poneke started the second half in positive vein, a good build-up seeing lock Galu Taufale scoring to make it 27-10.

Tawa first five-eighth James So’oialo then kicked a 40 metre penalty and then Tawa scored their fifth try. Following a scrum 40 metres out, prop PJ Sheck linked with propping partner Sitiveni Paongo to score to make it 37-10.

A solid two-minute period of play with ball in hand resulted in Poneke scoring their second try through right wing Issac Moe Jenkins, converted from out wide by first five Pakai Turia. This made it 37-17.

But once more, Tawa pulled clear again. It did not help Poneke’s cause that the home side could bring two Hurricanes off the bench in Pepesana Patafilo and Orbyn Leger, and it was the former that scored the try that put the result beyond doubt.

Poneke kept coming at Tawa and scored their third and fourth tries, with both Taufele and Moe-Jenkins scoring their doubles – all their tries coming in the left corner at the Lyndhurst Road end of the ground.

Tawa had the final say, scoring their last try on fulltime to right wing PJ Iosefo who collected a kind bounce from a kick ahead off a scrum in the 22.

At William Jones Park, Hutt Old Boys Marist marred Wainuiomata’s Old Timers’ Day with a 30-28 win over the home side.

Wainuiomata led HOBM 22-10 at halftime, but were run down in the second half. The Eagles won the match with a 77th minute Brandyn Laursen penalty.

For the home side, 23 of 28 points were scored by first five-eighth Josh Robertson-Weepu. He kicked seven penalties in the match, including five in the first half.

Laursen opened the second half scoring with a try that he converted himself and it was now 22-17. Robertson-Weepu slammed over another penalty to make it 25-17, but the Eagles drew to within a point with Brett Manaia’s second try, and there was still almost 20 minutes to play.

Laursen kicked another penalty to put his side in front, but Roberston-Weepu replied to go back ahead. But the Eagles second-five had the final say with his winning kick three minutes from time.

At Onepoto Domain, Northern United retained the Ivan Hardgrave Trophy with a 76-6 win over the Paremata-Plimmerton Hammerheads.

The floodgates opened in the second half, with a barrage of try scoring and Norths overwhelmed their neighbours.

For Norths, fullback Toby Kennett crossed for a hat-trick and No. 8 Luca Rees and left wing Ropati Sooalo both bagged braces.

All four Women’s games at their Gala Day at the Petone Rec went with the form guide. Oriental Rongotai has one hand firmly clamped on the Division 1 Rebecca Liua’ana Trophy after beating Petone 51-10, while Norths kept their very slim hopes alive with a 53-21 win over Marist St Pat’s.

In Division 2 Paremata-Plimmerton and Hutt Old Boys Marist maintained their unbeaten records ahead of their meeting next week, but both were made to work for their wins today; Pare-Plim overcame Avalon 26-5, while HOBM pulled away late on to beat a plucky OBU Impala’s side 46-17. The fifth match was a non-starter after Wainuiomata was unable to field a side to face Poneke.

There were a smattering of minor upsets, near-run things, and blowouts across the remaining grades.

In the Premier 2 Harper Lock Shield Tawa kept the grip on control after seeing off one of their nearest pursuers in Poneke by 44-12 at Lyndhurst. Tawa led this match 17-5 at the halftime interval and it was 20-12 midway through the first half before Tawa kicked a penalty to move ahead 23-12. The match-winning try came off the back of an attacking scrum to veteran Peniasi Tokakece. This was followed by a penalty try right on fulltime that blew the score out somewhat.

Another of those chasers, Norths, were involved in one of those minor upsets, beaten 29-22 at Onepoto by previously winless HOBM, but Ories bucked that trend and moved into second with a 57-26 win over Petone Blue. The fourth match was a mid-table stoush, where OBU came back from an early 0-17 deficit to pip MSP 29-26 at Kilbirnie.

In Premier 2, Division 2, the Upper Hutt Rams crushed Pare-Plim 69-0 to assume what is now a sole lead after previous joint-leaders Stokes Valley were beaten 10-27 by Johnsonville in an ugly match involving red and yellow cards from incidences we don’t want to see in this game and no doubt trips coming up to the WRFU judiciary mid-week.

Wainuiomata got their second win by getting past Petone White 37-18, and Avalon recorded their first win by thrashing Wellington 61-17.

Two close results and one that wasn’t in the Colts Division 1 Paris Memorial Trophy. OBU Green kept their place at the top, but only just after seeing off a gallant HOBM team who must be due some luck in a 33-29 scoreline.

Ories recorded their second win, beating Petone 22-18 while Tawa got on the board in emphatic fashion in routing MSP 76-26.

Tawa’s win at a windy Redwood Park was built on a dominant scrum and a positive mindset to move the ball wide to their dangerous outsides, such as fullback Bill Tamani and left wing Shiek Karam.

Tawa counterattacked from their own side of halfway with their first touch of the ball. This led to an attacking scrum and halfback Estavaan So’oialo made a dart, the ball was recycled and fullback Tamani crossed.

Right wing Mofate Siupolu and centre Daniel Fouhy scored the next two tries and Tawa were 19-0 up fairly quickly. Left wing Karam crossed for their bonus point and Tawa led 24-0.

MSP replied with a try just before halftime after a period of attacking play and centre Malachi Feterika scored to make it 24-7 at the break.

But Tawa re-found their earlier gear early in the second half and Karam crossed again to put them up 31-7. Replacement back Zephaniah Neru scored from an attacking sequence almost from the next kick-off and at 38-7 this game was wrapped up.

Both sides piled on further tries to the end and over 100 points were scored in the match.

The Colts Division 2 JRD Cup has tightened up with both previously unbeaten sides going down. The Upper Hutt Rams were beaten 22-40 by a surging Avalon side, while Poneke rebounded from last Saturday’s heavy loss to take down OBU Black 20-7 for their first win. Pare-Plim got on the board as well, beating Wainuiomata 32-9.

Eastbourne maintained their lead in the Under 85kg JC Bowl, easing past MSP 41-13. Johnsonville, the Upper Hutt Rams, and Avalon kept pace with wins as well; The Hawks sent Poneke to a third-straight loss winning 37-7, the Rams accounted for the OBU Scallywags 35-15, and the Wolves got home over HOBM (score to be confirmed). The fifth match of the round saw Wellington beat Wests 34-7 in the battle of the winless.

The opening day of the College season saw a mixed bag of results and some teams putting themselves forward. In the Top 8 matches, Wellington College and Aotea will meet next week for one of the automatic berths after WC beat Hutt International 41-15 and Aotea beat Tawa 18-10. Mana will also have that opportunity after they travelled to Masterton and beat Wairarapa 36-10, and they’ll face Upper Hutt for the other place after drawing 22-all with St Bernard’s but progress after scoring more tries.

In the second 8 matches Porirua beat Hutt Valley HS 26-15, Kapiti topped Naenae 31-17, and Bishop Viard won an arm wrestle with Wainuiomata HS 12-5, while the result from Paraparaumu and Taita wasn’t yet to hand. In the second XV pool Silverstream were too good for Wellington College winning 45-15, as were Town prevailing 41-5 over Scots.

This week in club rugby history 20-26 May