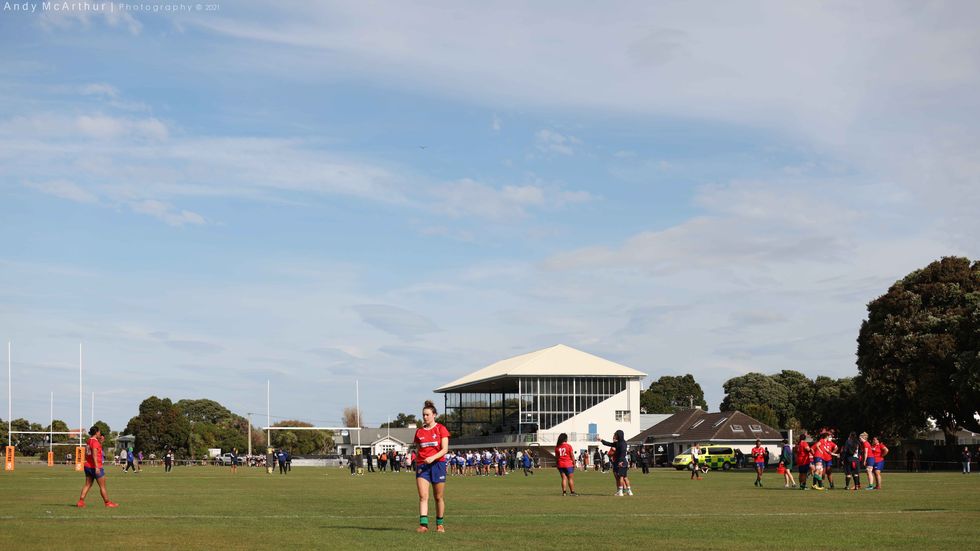 Above action from the WRFU Women’s Gala Day held at the Petone Rec on Saturday. More photos here

MORNING EDITION: The sixth round of the Wellington club rugby competition this coming Saturday features the famous McBain Shield between Hutt Old Boys Marist and Petone. The two sides have been playing for the ‘McBain’ since 1934 and Petone are the holders having won 32-24 last year.

This coming weekend’s Swindale Shield matches at a glance are here (more details later in the week):

The first round Women’s Division 1 competition will be decided this Saturday, with Ories (on 25 points) clearly in the box seat to win the Rebecca Liua’ana Trophy outright over Norths (20) when they meet. HOBM and Paremata-Plimmerton (both on 20 points) meet in the decider of the Division 2 competition and the right for promotion to the top tier for the remainder of the season should they wish to.

There is one First XV match this coming week, in Paraparaumu. The home college hosts Bishop Viard College on Thursday afternoon in a Premiership grading fixture.
+++++

Unfortunately, here at Club Rugby we are compelled to report on unsavoury happenings that blight our local game. The Johnsonville vs Stokes Valley Premier 2 match at Helston Park was marred by an incident where it is alleged that a Johnsonville player was kicked in the head setting off a melee after which three players received cards.

A second took place at the conclusion of the OBU v MSP Premier game where it is alleged comments were made by OBU supporters towards the MSP players, touching off another incident.

Club Rugby understands that investigations into both incidents are underway.

Furthermore, Club Rugby has been informed of an alleged spectator incident at a school game and of another club match being called off by the referee before its scheduled fulltime conclusion.

This website wishes to make no further comment on any of the above until are already out there in the public domain. Please direct anything to the WRFU or to other media outlets covering the game.

Hutt Old Boys Marist’s Premier 2 side got off the mark on Saturday, toppling Norths at Onepoto Park. Helping their cause was nearly 600 games of Premier rugby in 200-gamers Nick Risdon and Simon Malaeulu, and 175+ from Alexis Time.

Three players celebrated their 150th matches for their Premier sides on Saturday. Teru Time led his Wainuiomata side against HOBM, Mateaki Kafatolu came off the bench for Petone against Johnsonville and Hiria McRae played her record 150th match for the OBU Impalas.

In Ayesha Leti’l’iga watch, the Oriental-Rongotai centre scored five tries in her team’s Women’s Division one 51-10 win over Petone. This takes her career tally to 147 tries scored in 58 club rugby matches.

Below: Seven penalties to Josh Robertson-Weepu on Saturday. What is the record for most penalties in a Wellington club rugby match? We suspect this is a record that would go back a long way!

Some credit due to young up-and-coming Wellington referee Ollie Michie who refereed the Petone vs Ories Women’s match, and then owing to illness and unavailability backed-up straight away to referee the Premier 2 match between the same two clubs.

The Billy Wallace Best & Fairest competition has been running continuously since 1966. It is understood this is still going this year. If so, let’s have an update please. Some players in good form.

Nobody in the Mighty Maroons army of supporters could disagree after Taradale retained the cup with a 46-19 demolition job on the competition’s only previously unbeaten side this season, Hastings Rugby and Sports, at Elwood Park today.

“We had a slow start to the year. This is the first game where we’ve got up early and kept the pressure on. Hopefully we can continue this form in the Maddison Trophy round,” Higgins said.

Higgins, 21, who is in his first season with Taradale after transferring from Wellington’s Norths club was outstanding. In addition to his hat-trick which he completed by the 20th minute mark he had two assists and two steals.

The Crusaders‘ record in home finals matches is 25-0.

Sevu Reece scored a cracking try which went viral on social media. I blame the pass, it stretched a long way.

It took Richie Mo’unga 78 matches to kick his first dropped goal for the Crusaders. Andrew Mehrtens kicked 17 and Daniel Carter 11 in their entire career.

Scott Robertson has won 60 of 70 matches as Crusaders coach.

Sometimes video referee referrals are like shy kids on a first date, looking too hard in the mirror for flaws that don’t really matter.

Don’t panic Hurricanes fans. We’ll be top of the table when we beat the Waratahs next Friday.

Across in Australia, the Reds beat the Brumbies 19-16 to win the Super Rugby Australia title. In front of a big crowd at Brisbane, the Reds won with a try at the end.

The latest Rugby News magazine is out now, featuring a contribution from Club Rugby and a First XV season preview section inside. Look for Dan Carter on the cover:

More photos galleries posted after the weekend. Visit and bookmark this page at: https://clubrugby.smugmug.com/2021