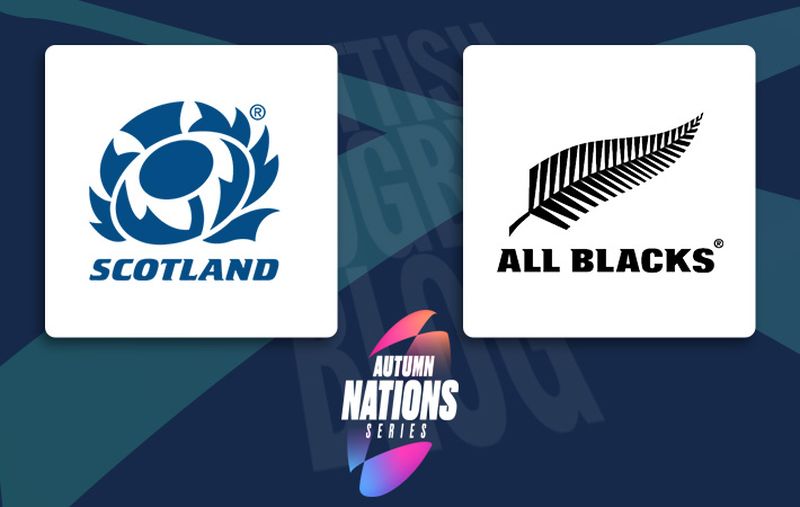 Scotland was the first of the Four Nations sides the All Blacks played. It was their fourth-ever test match and was played at Inverleith in Edinburgh on 18 November 1905. The All Blacks won 12-7 scoring four tries to one.

All 19 matches since played in Edinburgh have been at Murrayfield.

Overall, the two sides have met 32 times: New Zealand has won 30 and although two matches have been drawn, (in 1964 and 1983, both in Edinburgh) Scotland has yet to register their first win against the All Blacks. A total of 116 years and 360 days have now elapsed since that first meeting.

This was the first match between the two sides since they last met in Edinburgh in November 2017 when the visitors narrowly won 22-17. In between these two matches the All Blacks have played Ireland six times, Wales four times and England twice.

Of the Four Nations sides, the All Blacks have played Scotland on the fewest occasions. England is at the top of the list with 42 tests followed by Wales with 37 and Ireland 36.

The All Blacks were behind 14-17 at halftime against Scotland for just the third occasion in the 32 tests they have played together. This match was also the 150th time in all tests the All Blacks have trailed at the halfway mark which has resulted in 66 wins, 77 losses and seven draws.

This was the fourth time this year the All Blacks were behind at halftime. They lost all three of the previous matches.

The All Blacks scored 31 points in a test for the ninth time. They have lost only once when recoding that score: 31-43 to France in the Rugby World Cup Semi-final at Twickenham in 1999. For the record, in the 217 matches the All Blacks have scored 32 points or more, they have lost just three of them.

The All Blacks conceded 23 points against Scotland: for the second match in succession this year and the fourth time in the 12 matches they have played so far in 2022.

During the match the All Blacks passed 9,000 points scored in all away games. The total now sits on 9,026.

They have aggregated 8,664 points in all of their home matches giving them a combined total of 17,690 points in 624 test matches.

The All Blacks four tries against Scotland took their overall tally in 2022 to 52. This is the 20th occasion they have brought up a half-century of tries in a year, the first time was back in 1995. From 2010 to 2019 inclusive they passed 50 tries but last year they surpassed all of the preceding years by amassing 100 tries: 101 to be exact.

Finlay Christie was born in Scotland and is one of seven to have come from that country and play for New Zealand. Of those seven however he is just one of three who have played a test for New Zealand against the country of their birth. Mike Gilbert was the first to do so in 1935 followed by Laurie Haig in 1954. All three played their match in Edinburgh.

Telea is one of eight players in this year’s squad to have scored a try on test debut. Those who went before him are: Sam Whitelock (two tries), Codie Taylor (one), Scott Barrett (one), Rieko Ioane (one), David Havili (one), Samisoni Taukei’aho (two) and Pita Gus Sowakula (one).

Samisoni Taukei’aho scored his seventh try of the season, the most by any All Black in 2022. He now has scored a total of 10 tries in 20 match appearances. Taukei’aho scored the first try of the match against Scotland and by chance, he also scored the final try in the previous test against Wales. That try was scored at the 80+2 minute mark and the one against Scotland was in the third minute. That means he scored twice in the space of around four minutes of playing time, allowing for the time taken to kick the conversion against Wales. Taukei’aho has actually scored the first try for the All Blacks three times this year: against Argentina at Christchurch, against Australia at Melbourne, and against Scotland. Those tries have been scored in the 11th, fourth and third minute respectively.

Scott Barrett scored the other try, his seventh in 57 matches.

TJ Perenara made his first test appearance of the year having last played against Ireland at Dublin exactly a year previously to the day. He extended his All Black record for the most matches as a replacement to 57.

Perenara is the fifth Halfback to be used this year. The full list is Aaron Smith (11 matches including 10 starts), Finlay Christie (nine matches, two starts), Folau Fakatava (two matches, no starts), Brad Weber (one match, no starts) and Perenara.

The last time the All Blacks used five different Halfbacks in the same season was 2015. On that list were Andy Ellis, Brad Weber, TJ Perenara, Aaron Smith and Tawera Kerr-Barlow.

Anton Lienert-Brown received a yellow card in the 12th minute. He brought the total number of yellow cards issued to the All Blacks this season to eight in 12 matches.

Both sides had two sets of brothers in the match. For New Zealand were Beauden, Jordie and Scott Barrett as well as Akira and Rieko Ioane. For Scotland were Matt and Zander Fagerson, and Jonny and Richie Gray. At one point in the match eight of the nine were on the ground at the same time.

A total of six different overseas-born players appeared for the All Blacks during the match: two from Tonga and one each from Australia, Japan, Samoa and Scotland.

Scotland used nine different overseas-born players: three each from England and South Africa, two from Australia and one from Canada. One of the Australian-born players had previously represented the country of his birth.

Jack Dempsey played 12 tests for Australia between 2017 and 2019 before undergoing a stand-down period prior to making his debut for Scotland (against Australia) two weeks before this match. Dempsey was issued with a yellow card at the 65 minute mark.

A total of 13 players had not previously appeared in a test for Scotland against New Zealand.

Finn Russell kicked 11 points and with his seven scored when the two teams last met in 2017 he now has 18 points against the All Blacks. In 64 test appearances his tally is 247.

South African-born WP Nel played his 50th match for Scotland having made his debut against Italy back in 2015.

Scotland wore a lilac strip for the match with the jersey numbers being in the tartan colours of former Scottish international Doddie Weir.

Doddie Weir has Motor Neurone Disease and in a touching tribute he brought out the match-day ball. He played 61 tests for Scotland between 1990 and 2000 and in six tests against New Zealand scored two tries: both in the 1995 Rugby World Cup Quarter-final in Pretoria.

Frank Murphy of Ireland was in charge of his first test involving the All Blacks.