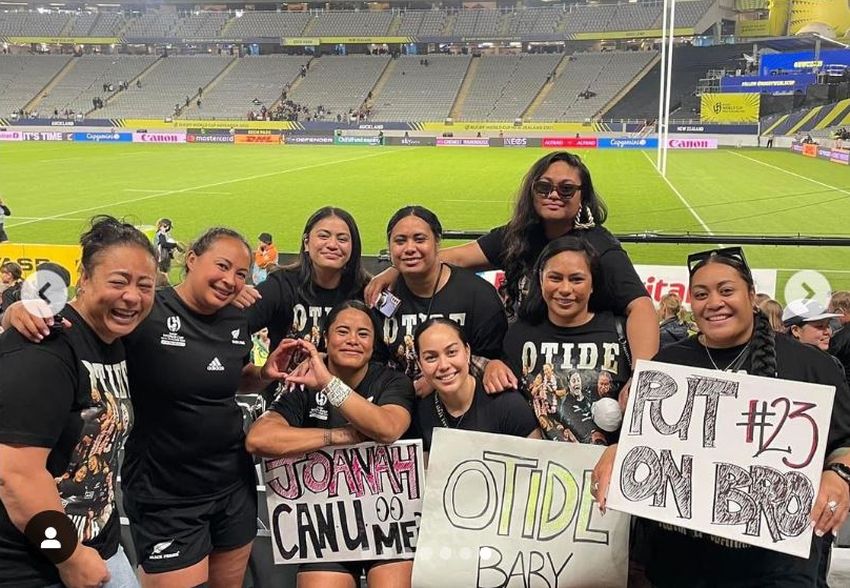 It’s a moment that will live in Kiwi sporting folklore. Stacey Fluhler busting her ankle in a tackle while delivering an improbable offload to wing Ayesha Leti-I’iga who scored the winning try in the World Cup final.

With seven minutes remaining the Black Ferns were down 29-31 against England at Eden Park when Fluhler retrieved an audacious kick by fellow midfield partner Theresa Fitzpatrick. Fluhler appeared bound for her second individual but was denied by a scrambling white wall. Somehow though the ball popped out to Leti-I’iga who competed her double.

In front of a world record crowd of 42,579 for a women’s rugby international, Fluhler was then assisted from the field, grinning widely, and applauded raucously by the faithful.

Scoring the winning try in a World Cup final is what Leti-I’iga was born to do. Her modesty borders on self-deprecating.

“It was definitely a team try. Everyone else did the hard yards at the beginning and I got the easy stuff at the end,” Leti-I’iga said.

“Wayne Smith calls me the detonator, and I know when I am going on to that field, I am doing so to make a difference, so it was great to contribute how I could.

“This moment has always been a dream for not only me but for my granddad throughout my career, and for my mum as well, neither of whom are no longer here. So, to see my family up there representing my mum and my granddad was extra special.”

Leti-I’iga was introduced into the game in the 17th minute when Portia Woodman was knocked out of the game due to an unfortunate head knock with Lydia Thompson who was red carded.

“Portia has been someone I have always looked up to in the wing position, and I had big shoes to fill coming on for her,” Leti-I’iga said.

England’s rolling maul was kryptonite. It was the source of four tries. Amy Cokayne scored a hat-trick, joining Black Ferns prop Toka Natua (2017) as the only player in Women’s World Cup final history to achieve that feat.

Joanah Ngan-Woo came on in the 63rd minute, replacing Maia Ross, and proved to be England’s kryptonite. The Black Ferns were ahead 34-31 when Ngan-Woo conceded a penalty in the 79th minute for obstructing Abby Ward.

With the fulltime hooter having already sounded, England had a lineout five metres shy of the Black Ferns try line. Ngan-Woo was lifted by Krystal Murray and flanker Alana Bremner and thrust her left arm as far and across as she could, deflecting the ball from the grasp of Ward and into the firm hands of Murray. ‘Muzz’ tried to get over the touchline to end the game but instead went to ground to avoid isolation. She turned her back to the defence to ensure the ball was protected for the final exit.

“We talked about their lineout and what they were going to try and do in these situations. We just needed to be sure we all knew our own roles and that is what we did.

“There was definitely no fear from me, and we had been doing our analysis for the past week on their lineout, especially on Abby their main jumper, and watching from the bench I got to see up close, so I knew what was coming.

“Something we have been working on all year is being calm under pressure and that we have a clear head to make decisions. When I came on, I felt that in the team, and we all knew exactly what we needed to do.”

What was Leti-I’iga thinking in a hopeless position on the wing to influence.

“I play alongside her for Ories and the Pride and I knew that if anyone would do it was Joanah who would get up there and get that ball back for us,” Leti-I’iga said

“I have always looked up to Joanah as a player and she is a great friend as well, so I knew she would get the job done for us.”

Leti-I’iga scored 10 tries in 9 tests for the Black Ferns in 2022 while Ngan-Woo featured in all 12 Test wins and though on the bench throughout the finals stages of the World Cup having been a starter most of the year precisely understood her role.

“I’m just glad to grab any opportunity and being on the bench our role is as a spark plug and as detonators, so I took that role on,” Ngan-Woo said.

The pair are not the first Ories women to win the World Cup. Rebecca Liua’ana (Black Fern 93) anchored the front row in the 2002 Barcelona success where the Black Ferns didn’t concede a single try or lose a single lineout. The prop scored tries against Australia and France and withstood a fierce challenge from England in the decider which New Zealand won 19-9. By her reckoning, and who would argue, ‘Becs’ played 79 games for Wellington and scored 25 tries. In 2006 she was the anchor of the scrum in the Wellington Pride’s lone NPC title success. She’s never far from the Polo Ground.

“It’s amazing for me and Ayesha to be representing our clubs tonight and being on the world stage and being out there together in the anthem and the haka and it’s a dream come true for both of us,” Ngan-Woo said.

P.S. Ories World Champions isn’t a new phenomenon. Fullback John Gallagher was a member of the first All Blacks World Cup winning team in 1987. Who could ever forget the exploits of Julian Savea and Ma’a Nonu at the 2015 World Cup.

The A-Z of Wellington Club Rugby for 2022