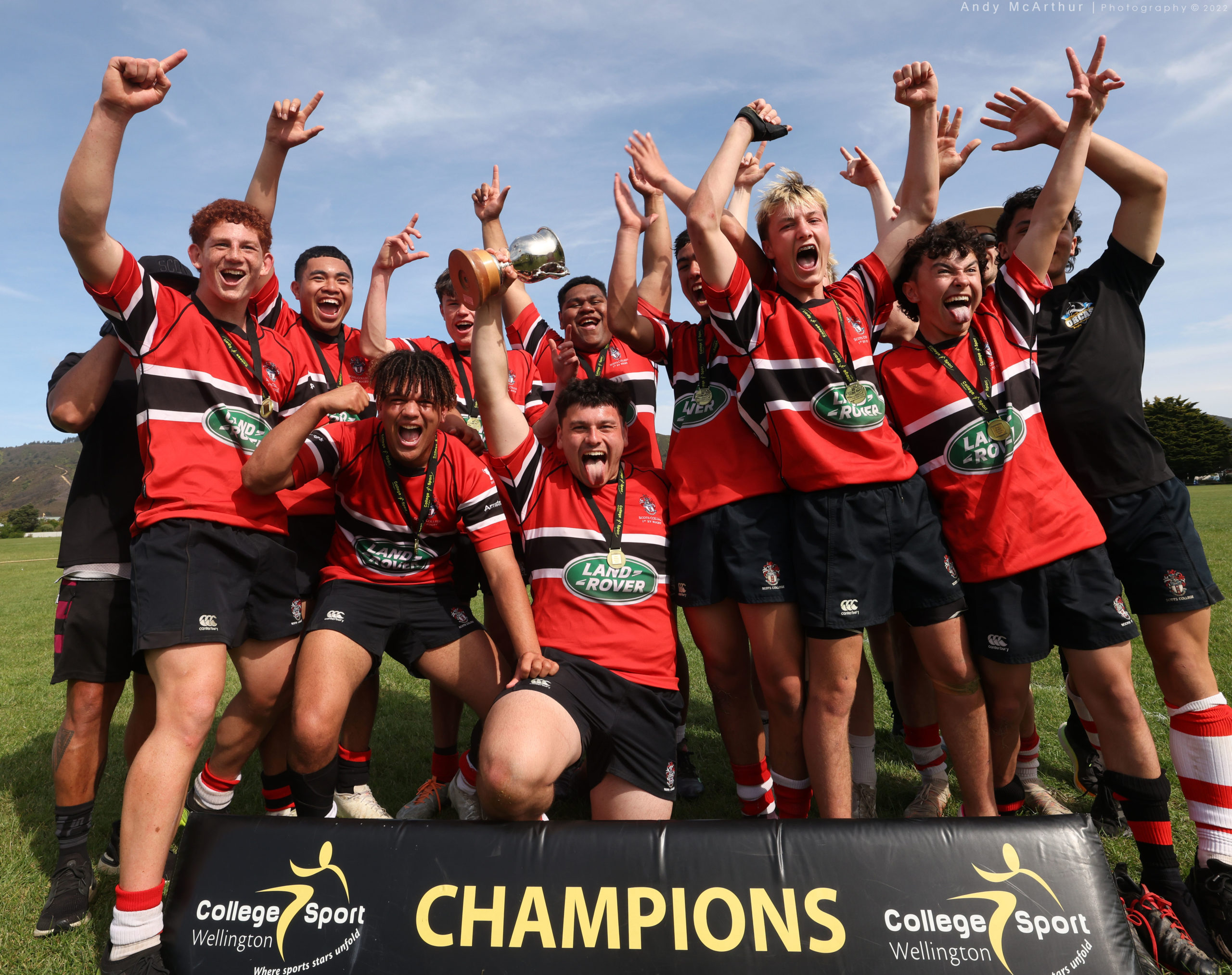 Scots College celebrate their victory in the final against St Pat’s Silverstream. PHOTO (and below): Andy McArthur.

Small fields didn’t detract from the sevens rugby on show, with plenty of hot rugby action in the tournament that resumed this year after a Covid-enforced absence last season. Match results courtesy of College Sport Wellington at the bottom of this article.

Scots College won the Open Boys Christian Cullen Cup title with a 22-21 win over defending champions from 2020, St Pat’s Silverstream, in their final.

Wellington College captured the U15 Boys title with a 14-12 win over their St Pat’s Silverstream counterparts in their tournament decider.

Scots won the Open Boys final courtesy of a three-try burst by bustling playmaker Iietaia Campbell, who latched on a short kick and chase just before halftime to keep his team in the hunt at 14-12 down.

Campbell then went back-to-back in the second half, finishing off a 45-second team movement to take the lead at 17-14 and then grabbing a short intercept try moments later to put his side up 22-14.

Silverstream scored a consolation try on fulltime to close the gap.

Both finalists had already qualified for the National Condors heading into the final, to be played in Auckland in early December.

Scots had already qualified heading into their fourth and final round-robin match of the day by beating Rongotai College 24-12, but the Silverstream-Wellington College fixture at the same time was a virtual qualifier for the second berth to make the trip to Auckland.

In this, Silverstream won 19-5, but Wellington College pressed them hard all game.

There were just three teams entered in the Open Girls tournament; St Mary’s, Scots College and Wellington Girls’ College, who played a double round-robin before St Mary’s and Scots met in the final.

The final saw St Mary’s capitalise on two errors to score twice and lead 14-0 at halftime.

Early in the second half, Hera Maihi, the smallest player on the field, broke through to score their third try and put them up 19-0. Scots College came back with a try, but St Mary’s scored again at the end.

There were seven teams in the Boys U15 competition, who competed across two pools, before semi-finals and a Bowl then Cup final.

Hutt Valley High School entered two of these teams, and their A side played well throughout the day. They beat Scots College 17-10 in their first match of the morning and went on to lose to Silverstream 41-24 in a hard-fought semi-final.

In the U15 final, both sides scored a try apiece in the first seven minutes and it was locked up at halftime. In the second half, Wellington College pounced with a turnover and runaway try from 70 metres out, but Stream replied in kind but Wellington College held on by the margin of a conversion.

Several schools involved in today’s Condor 7s next compete on Saturday in Masterton in the Hurricanes Schools Sevens tournament.

Short Passes 16 December (the last one of the year)