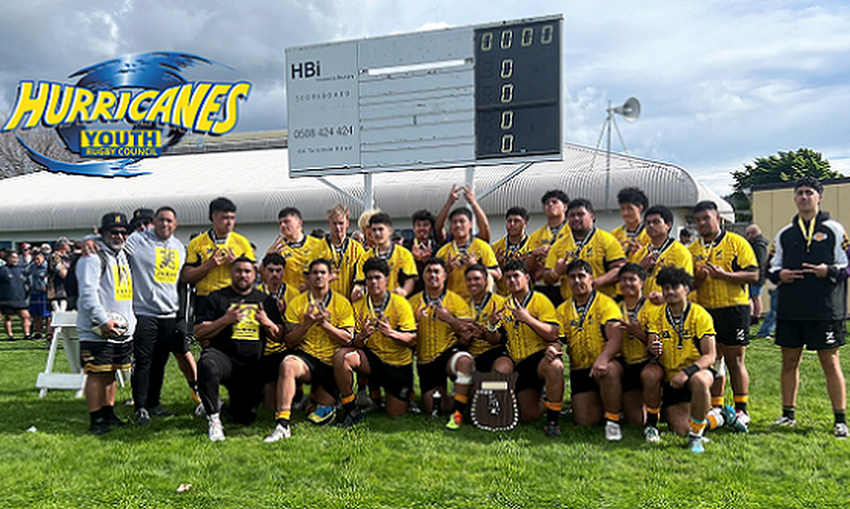 The Ranfurly Shield has been locked away for the summer, with the Wellington Lions successfully defending it against Waikato this afternoon.

The Lions beat Waikato 34-6, after leading 10-6 at halftime, producing a suffocating second half to hold off the visitors and deny them a sniff at the Shield. Wellington also goes to the top of the Odds table in the NPC with next week’s match against Counties Manukau away for the Jonah Lomu Memorial Trophy to come.

The Wellington Samoans U18s have won the Hurricanes Youth Council’s Trustbank Central Secondary School Shield for the first time since 2017 and only the third time in the 30-year history of the Shield with a nail-biting 25-24 win over the Hawke’s Bay U18s in the final.

The Samoans had to hold off a late surge by the home side on Tremain Field in Napier, who scored out wide and converted from the sideline with a couple of minutes to play to close to within a point. Hawke’s Bay launched one more furious assault, but the match ended with them hot on attack in the same corner of play.

After leading 11-10 at halftime, the Samoans had twice pulled ahead in the second half only for Hawke’s Bay to hit back. Big defence in front of their own line on two separate occasions was the order of the day, prior to the home side finally crossing for their final seven-pointer.

Earlier, a long feeling out period saw both sides create opportunities inside the respective 22s, before the first points of the match came through a Hawke’s Bay penalty after 20 minutes.

From there, the Samoans built phases in front of the posts before ripping it wide to left wing Fiti Aliva who scored in his corner to make it 5-3.

Centre Ietitaia Campbell increased the lead to 8-3 with a penalty in front of the poles.

Hawke’s Bay chased up and sensationally won the next re-start, which led directly to their first try of the match to their openside flanker. The conversion was good, and they were up 10-8.

Just before halftime, Hawke’s Bay lost a lock to the sin-bin for a tackling misdemeanour and Campbell kicked a second penalty to give the visitors the one-point lead at the turnaround.

The Samoans then scored the try of the match just after halftime, scoring a lovely practiced set-piece try off an attacking lineout in the right-hand corner with flanker Jordan Chapman crossing untouched. Campbell’s conversion hit the left-hand upright and sailed through the middle and they increased their lead to 18-10.

Hawke’s Bay struck back with a clinical try of their own off a lineout inside the 22, a drive by the forwards and then the try off the next phase. It was back to a one-point game at 18-17.

The Samoans replied soon after with their third and ultimate match-winning try, spinning it wide from a free kick, building pressure with ball in hand and scoring the seven-pointer.

The skies now opened with a heavy shower of rain, making conditions slippery and ratcheting up the tension heading into the final stanza of the match. But the home side weren’t able to capitalise until it was too late and the Wellington visitors held on for a popular victory.

Watch a replay of the final here: https://www.youtube.com/watch?app=desktop&v=Bqg4SMP49GI&fbclid=IwAR06TQBH8FFIh8Ib5pmLRUxK2Ad41WxW9INRcHO8EQ8Fgi1qZSU3_rGiEbk

In the other U18s competition play-off matches, the Wellington Māori U18s defaulted to the Poverty Bay U18s and Whanganui U18s beat the Wellington Centurions U18s 34-29. Whanganui were fast starters and jumped to a match-winning lead before the Centurions could get into the game. The Junior Butcher Boys led 27-7 at halftime.

The opening round matches of the 2022 Hurricanes Youth Council’s U16 tournament were also played today.

The Wairarapa-Bush U16s defeated the Whanganui U16s 33-5, while the Hawke’s Bay Development – Poverty Bay fixture is in Wairoa tomorrow.

The tournament proper is being played in Petone from Monday 3 to Thursday 6 October, over the first week of the upcoming school holidays.

In a key mid-table Heartland Championship fixture at Levin, visitors Mid Canterbury held off the home side Horowhenua-Kapiti side 15-13 in a late thriller.

Mid Canterbury led 15-0 at halftime, which was still the score right up to the 77th minute when Horowhenua-Kapiti scored in the corner off a scrum to make it 15-5.

The try went unconverted but Horowhenua-Kapiti were awarded a penalty on halfway following a melee post-try. This 50-metre penalty was kicked and the visiting team’s lead was now 15-8.

Receiving the next kick-off and with the last movement of the match, Horowhenua-Kapiti quickly ripped it wide to left wing Loius Northcott who scampered in to score a second try about 10 metres in from touch.

The conversion to force golden point extra time looked good but was pulled away with the wind at the last moment and Mid Canterbury held on for a 15-13 win.