Skip to content
You are here
Home > Latest Club Rugby News > When Wellington won the Ranfurly Shield off Waikato, ushering in 50 days of fanfare 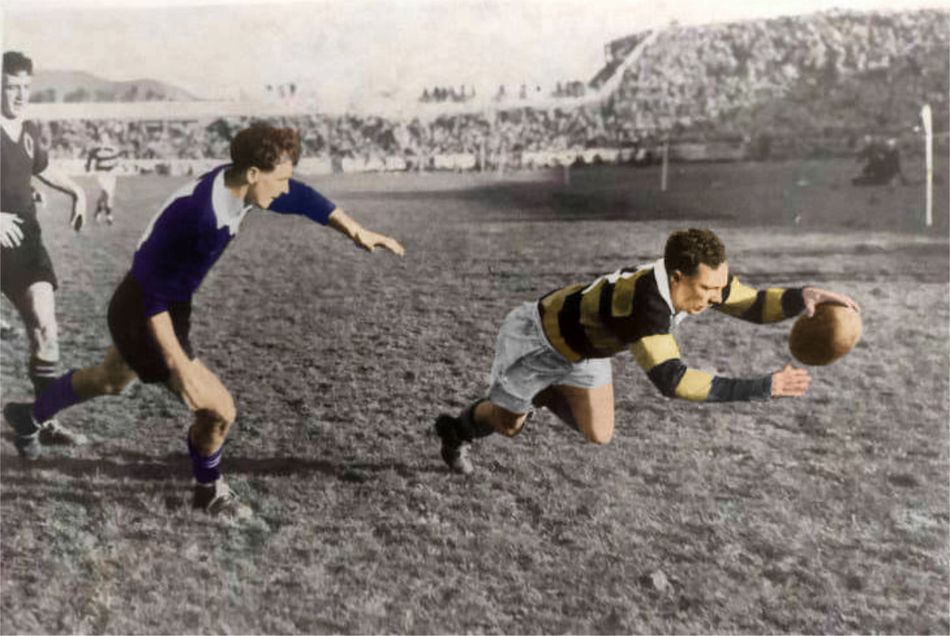 August and September 1953 were heady days for not only Wellington’s rugby fans, but the city’s community as a whole.

On 1 August 1953 Wellington travelled to Mooloo country and won the Ranfurly Shield off Waikato.

What followed was exactly 50 days of fanfare and general positivity in the region, before Canterbury came to town later in September and took it all away.

1953 had already been a momentous year. New Zealander Edmund Hillary, soon Sir Ed, scaled Mt Everest and hot on the heels of that in early June the new Queen Elizabeth II was coronated in London. In club rugby, University had retained the coveted Jubilee Cup and their left wing Ron Jarden was Wellington’s most celebrated sportsman of the day.

Tragedy would strike at the end of the year when the overnight Christmas-Eve train from Wellington to Auckland plunged into the Whangaehu River at Tangiwai in the Central North Island, killing 151 souls on board, many of them Wellingtonians heading to Auckland for Christmas. That was in the future though are the Wellington representative rugby team arrived in Hamilton at the end of September to challenge for the coveted Log o’ Wood.

In 1953, the Ranfurly Shield was the most sought-after trophy in New Zealand rugby and probably in domestic sport. Wellington had last held it in 1931 when they beat holders Southland 12-3 in Invercargill the previous year and then defended it once (to Southland) before promptly losing it to Canterbury.

Waikato had won it off North Auckland (now Northland) in 1951 and were on a 14-match winning run as defenders.

The week before Wellington came to town, Waikato had been held to a 3-3 draw by Taranaki. Were cracks appearing?

Wellington had won six from eight matches thus far, their losses were to Taranaki (6-9) and Canterbury (8-9). Their form was solid but not remarkable. In the lead-up to the Ranfurly Shield challenge, local media reported that Wellington captain and front ranker Brian Lloyd had been abused and heckled and told his team were not worthy of challenging Waikato for the Shield. He would go on to be one of Wellington’s best players on the day.

Then, as is more often the case with Wellington teams, challengers Wellington’s strength was their fast-paced, positive style of play. With crack backs such as Jarden on the left wing, fullback Ray O’Callaghan, All Black midfielders Brian Fitzpatrick and Jim Fitzgerald and halfback Vince Bevan and forwards such as explosive openside flanker Bill Clark, Wellington was an exciting, entertaining side that took the field in Hamilton.

Pre-match, Wellington’s coach Clarrie Gibbons was upbeat. “The boys have done a lot of solid training,” he told the Dominion. “They are in good shape, but above all they are in great heart.”

Wellington led 9-3 at halftime and looked the superior side but had to withstand tremendous pressure for most the second spell before winning 9-6.

Wellington’s sole and winning try was initiated by O’Callaghan, on his 22 a few minutes in from touch.

The Dominion report picked up the action at this point: “Scores were 3-all, a penalty goal each, after 11 minutes’ play. For another 20 minutes they swept up and down the field. In the 32nd minute a Wellington back rush broke down and G.J. Carrington, the Waikato centre, kicked the ball through towards the touchline.”

“O’Callaghan fielded it a few yards in from touch on his 25 [22] and looked like he would kick the ball out. He suddenly elected to run the ball and barged past two opponents. The ball came in-field to S.W. Judd, B.J. Lloyd and C.P. Williams.”

Forward Williams found space from inside his half, with left wing Jarden looming in support. The ace of matchwinners collected the pass and scorched 30 metres to score.

Jarden later added a second half penalty, which was enough to seal victory and the Ranfurly Shield.

Claude King in the Dominion wrote that: “Wellington supporters in their 100s raced across the field to chair the champions. They were joined by many wonderfully sporting enthusiasts, cries of ‘good old Brian’, ‘good old Ron’, and so on to each played filled the air.”

“Under the showers after the game the players sang and splashed gleefully,” wrote King, perhaps giving away too much information to the audience of the day.

Of these, the Otago defence was the most nail-biting, and it could have swung either way until quite late in the contest. Jarden scored a record six tries against East Coast, while the side was in sizzling form against Auckland and Taranaki. All were played in front of packed Athletic Park crowds.

But it ended when Canterbury came to town on 19 September and took it all away. Canterbury effectively starved the Wellington backs of ball and ran in five unanswered tries to win 24-3. A magical seven weeks for Wellington’s rugby and sporting fans was over.

Wellington used 53 players in 1953 in first-class fixtures, but only eight were debutants.

Another interesting player footnote was 1953 Wellington No. 8 Graham Mexted’s son Murray, also a No. 8, being part of Wellington’s team that also won it in 1981.

Wellington only had to wait another three years before winning the Ranfurly Shield again, re-taking it off Canterbury in 1956.