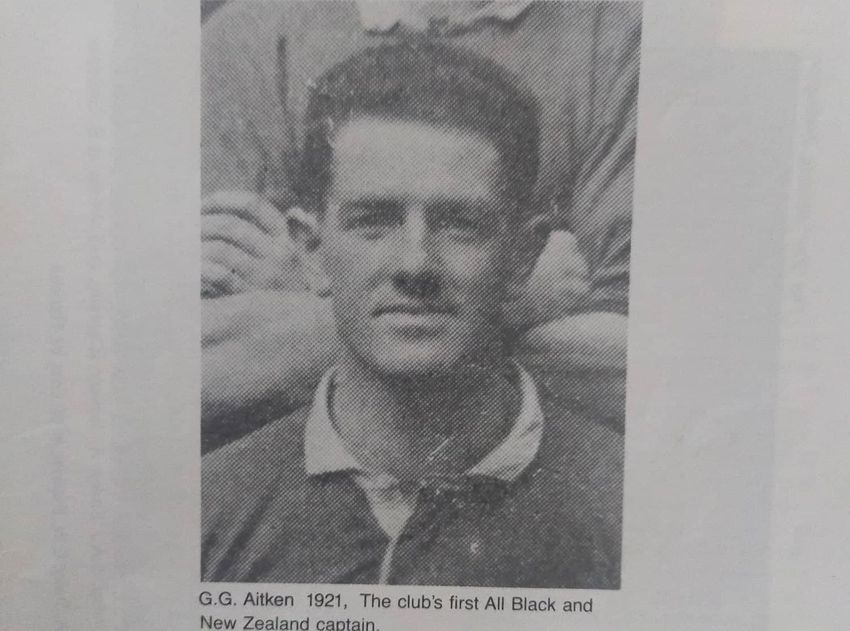 One of Buller High School’s favourite sons, the multi-talented George Aitken captained his then Westport District High School’s First XV aged 14 and first represented Buller as a 16-year-old in 1914. He played for his home province for two seasons, before moving to Wellington and bursting on to the Wellington club, university and provincial rugby scene at the tail end of the war.

As a young man of letters, Aitken joined the University club and within four years he was captaining the All Blacks and within five he was a Rhodes Scholar at Oxford University.

Aitken was a centre three-quarter and possessed high skill and explosive pace off the mark, a keen eye for a gap and the ability to set his wingers up in space. At most levels his great friend Archie Jackson played outside him, the pair forming a lethal combination for a brief few seasons at club, New Zealand Universities and provincial level. Aitken, along with Jackson, was also a champion track and field athlete. Aitken had been 50 yards champion at his school and won the Wellington and New Zealand Universities 440-yard hurdles and was runner-up in that event at the New Zealand Championships in 1919.

Aitken was also a gun cricketer and captained the Victoria University XI. What’s more he was a champion diver, played tennis for his university and won the Godley rifle shooting cup for cadets.

He studied economics at Victoria University and immediately made an impact on the rugby field in his first season at university in 1917, helping the club side to finish second to Petone.

In 1918 he captained University for the first time, leading to another runner-up finish in the Senior Championship, this time to Poneke. He was also captain of the Wellington ‘B’ representative team.

Aitken played for both University and Wellington in 1919 and 1920, an integral part of a strong Wellington Ranfurly Shield team and captaining the New Zealand Universities team against Sydney University.

1921 was a momentous year for Aitken. He again led the NZU side, and they played Wellington (winning 12-6) and travelled to Sydney again. He was also chosen in the All Blacks this year – not only as a player but as captain. He impressed selectors in the annual North-South match and trial fixture, who picked him to lead the national side at centre in the opening test in Dunedin against the Springboks.

His international career got off to a winning start with the All Blacks winning 13-5 in what was the first international between New Zealand and South Africa.

Aitken was ill in the lead-up to the second test in Auckland but took the field again at centre and as skipper. This time the Springboks won 9-5 to level the series up 1-1 with the third test at Wellington to come.

He was duly dropped for this third test, replaced as captain by Teddy Roberts and at centre by Mark Nicholls, both also Wellington players.

Aitken was the All Blacks’ youngest captain up to that point, before Herb Lilburne – who later played for the Hutt club – captained the team in the first test against Australia in 1929 aged 21 years and 112 days.

Aitken’s final game for Wellington on 9 August 1922 was a regrettable one, the 9-19 loss to Hawke’s Bay for the Ranfurly Shield.

He sailed for England shortly after and later excelled on the sporting fields in the UK.  He won an Oxford rugby blue, and whilst there he played eight times for Scotland in 1924, 1925 and 1929. In 1924 he played against the All Blacks for Oxford University and in 1925 he played in Scotland’s first ever Grand Slam winning team.

As well as Aitken, Chris Laidlaw (1968) and David Kirk (1986-87) were also All Blacks who won Rhodes Scholarships for high-achieving post-graduate international students to Oxford University.

Leaving Oxford, he went into business in England, returning to New Zealand in 1939 and joining the Department of Industries and Commerce.