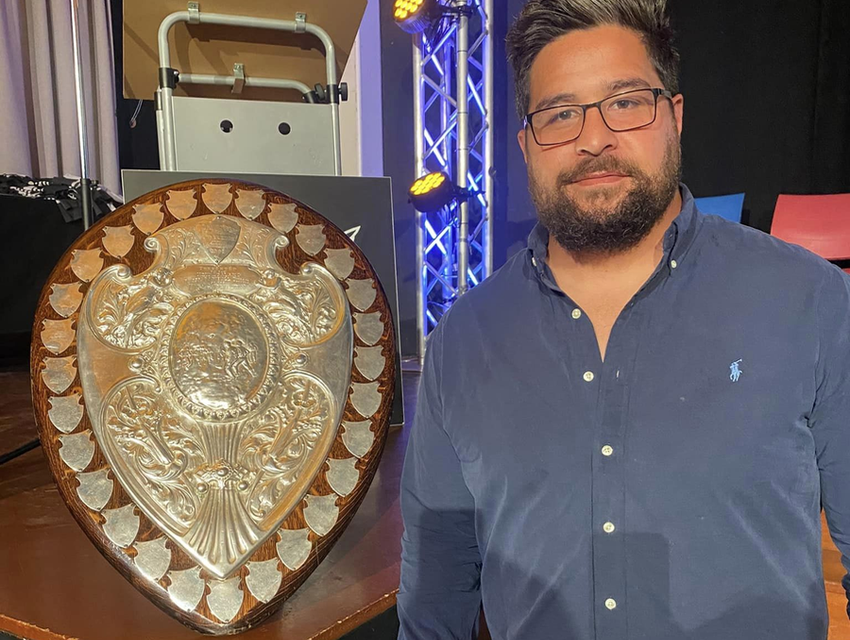 Pek Cowan and the Ranfurly Shield, at the Hutt Valley High School Rugby Awards on Tuesday night this week, where he coaches the school’s U15 team.

Pek Cowan was tentative about playing any rugby in 2022. The 36-year old had little to prove following 10 tests for the Wallabies, 130 games for the Western Force, and seven appearances for the Wellington Lions upon return to native pasture in 2021.

However props who play both loosehead and tighthead are a rare breed and that specialty coupled with a generous and competitive spirit has seen Cowan help anchor a Ranfurly Shield winning scrum.

On Saturday at McLean Park in Napier the Lions prized the Log o’ Wood off Hawke’s Bay 19-12, outmuscling the hosts with a committed and calculated effort.

“For us, playing to a plan and not letting the occasion get to us was key to our success,”  Cowan said

“We were patient, except for the end, and took the few opportunities when they arose.

“We played a different game, one with a harder edge and more tactically cautious. We kicked 40 percent more in this game than any other. I think we surprised Hawke’s Bay by turning our defence into attack.”

Only one try was scored in the tense arm wrestle by TJ Perenara. Aidan Morgan kicked four penalties and a conversion.

“It’s surreal for me to win something like the Ranfurly Shield. I was born in Wellington and moved to Australia when I was a teenager. I spent time in Japan and now after 17 years of professional rugby this happens. TJ Perenara had his first crack at it too, that’s unbelievable.”

With three rounds left in the Swindale Shield, leaders Petone were struck down by a front row injury crisis. Cowan answered an urgent SOS and his sturdy presence helped secure wins over Avalon, Johnsonville and Wainuiomata to secure the Villagers first round honours for the first time since 2009.

Cowan missed the Jubilee Cup and when overlooked by the Lions, despite declaring his availability, was resigned to the prospect his representative career might be over.

Suddenly Iona Apineru, Vince Sakaria and Tietie Tuimauga all collapsed with injuries and Cowan was back.

Another win followed on September 11 against Otago. However, Wellington nearly blew a 21-0 lead in conceding three rolling tries in an unconvincing 32-26 success.

“It’s been a different challenge playing with and against younger props. As an older prop there are some things I know that perhaps youngsters haven’t learned yet but the younger players are very willing and dynamic. Look at Asafo Aumua and Xavier Numia, they’re special athletes.

“It’s a credit to the Lions programme how much our front row play has improved. There is a passing on of knowledge which is a growing culture for scrummaging which hasn’t always been the case.”

Cowan has worked extensively with Iona Apineru, a New Zealand Secondary Schools loose forward who converted to tighthead for Petone this year and was named Villagers player of the year.

Cowan was snapped up quickly by the Australian rugby system when he arrived as a teenager. He was selected in their Secondary Schools’ side in 2004 and became a foundation player for the Western Force in Super Rugby 2006, making his Wallabies test debut in a 34-12 win against Italy in 2009.

The Western Force enjoyed their best Super Rugby season in 2014 when they won nine games and stunned the Highlanders (31-29) and defending champions the Chiefs (18-15) away from home,

Cowan was recalled to the Wallabies and featured in wins over France, South Africa, Argentina as well as a 12-12 draw against the All Blacks. At the same time his cousin Blair Cowan was starting an international career for Scotland.

“I’ve got so many memories of Perth. It’s really like a second home. The support for rugby was massive and it was bitterly disappointing when the Force were cut from Super Rugby.

“I wasn’t sure if I was ever going to come back to New Zealand but my three kids love it here. New Zealand is where my whanau is, so that’s why I decided to make the shift two or three years ago permanent.”

Cowan is immersed in the grassroots. He coached the Hutt Valley High School Under 15 team.

“It’s a joy and a challenge at the same time dealing with young men and all the laughter, learning and challenges that come with it.

“There were times where we only had ten guys roll up but they always wanted to play which was impressive. By the end of the season we always managed to field at least a starting fifteen.

“There is so much exciting natural talent in Wellington.  I also worked with the St Pats Silverstream scrum and what a great season they had.”

With an emphasis on speeding the game up and player safety, senior scrums are only allowed to push one and half metres now, is Cowan concerned the scrum is decreasing in relevance?

“Rugby is a game for all shapes and sizes and though I understand the need for player safety I’d hate for the scrum to disappear.  If the scrum became too depowered or reduced we become rugby league. Scrums, lineouts, rucks are all a part of the authenticity of rugby.”

Waikato represents an authentic threat in Wellington’s first defence off the Ranfurly Shield on Saturday. The Mooloo have only lost one game this season and All Black Damian McKenzie is the top points scorer in the NPC with 97 points.

“Waikato is a hard side to prepare for. They’ve got good forwards but it’s their young X-factor backs which makes them really dangerous. They can be quite inconsistent but their best is world class. I can’t wait for the challenge.”

The Huddy Hui caught up with Pek Cowan earlier in the season – watch the full episode at the link below: