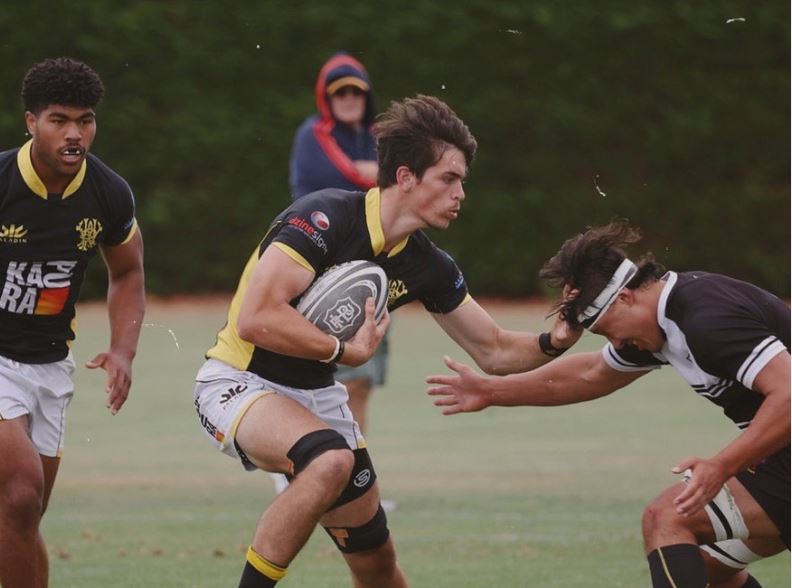 Rory Woods playing for the Wellington Academy last year. He has since moved to join the Northland Academy and has recently been selected in the New Zealand U19s for their tour which kicks off overnight on Monday in South Africa. PHOTO: Andy McArthur.

The following article by Adam Julian was first published on AllBlacks.com last week.

Rory Woods (Ngāti Kahu) is a grounded young man with a firm grasp of his Whakapapa. Strong connections with family and friends help drive his rugby greater heights.

Raised in Wellington the apprentice builder now resides in Whangārei where he is a member of the Northland Rugby Academy.

“Leaving Wellington wasn’t just about developing my rugby. It was about discovering my Whakapapa. My grandma was born in Kaitaia and my mum’s side of the family is from up north. It was an opportunity to connect with them,” Woods said.

“A month or two ago I heard a team was being selected but I wasn’t sure when it was being picked which made me anxious as I really wanted to make it. When I found out I made it I was over the moon. I told Mum and Dad and had tears in my eyes. I went down to the Fish n’ Chip shop and celebrated that way.”

Woods was a regular representative selection in Wellington. Just last year he played for the Wellington Under-19’s who won the Central Region Shield for the 19th time since 1983. He was also picked in the New Zealand Māori Under-18 squad.

Unfortunately his progress has often been curtailed by injuries, especially at St Patrick’s College, Wellington.

“In Year 11 I was doing athletics to keep fit for  rugby when I fractured both of my hips and tore the flexors. I had to learn how to rehab early and that’s put me in good stead for now.

In Year 13 I twisted my ankle from a lineout jump. I tore the ligaments and only played three games.”

The shift north has seen Woods more frequently on the field. He helped Waipu make the senior club final which they lost to Mid Northern and he was selected in the Blues Under-20’s for the Super Rugby Under-20 tournament in Taupo in May.

“She’s a lot of passion in the north. They don’t back down from a fight,” Woods laughed.

“I loved Super Rugby. It was the biggest opportunity I’ve had in rugby so far. I got a decent amount of minutes, but I had to fight back from a torn hamstring.”

The Blues beat the Crusaders 48-27 in their final fixture. The team was coached by former All Black Steven Bates with support from Dan Bowden and Waipu stalwart Graham Hughes.

Northland has made a great start to the Bunning NPC winning four of their first six games including an historic 23-22 win over Auckland in Whangārei. Woods has trained with the Taniwha and sees a bright future.

“I’m not surprised by how well the boys are going. It’s a great environment that really grows the player. They conduct themselves as true professionals.”

The New Zealand Under-19’s are going to have to be very good to win four matches in South Africa. South Africa are notoriously strong at age group level.

“It’s going to be tough no doubt but that’s the beauty of it being exposed to different styles and conditions.

“I’ve heard of pretty much everyone in our team. It’s great to have a couple of St Pats boys in there and some players from the Blues 20’s. I reckon we will play an exciting brand of rugby and be really competitive.

The team spent two days in camp before heading to the Republic. The head coach is former All Black Mark Hammett who guided the St Thomas of Canterbury College First XV to their first ever semi-final appearance in the Miles Toyota Championship.

Props Bradley Crichton and Siale Lauaki are schoolmates of Woods. The former sports a mophead and helped Norths win the Jubilee Cup in August. Lauaki was the College Sport Wellington Sportsman of the Year in 2021.

Essendon Tuitupou (Kelston Boys’ High School) is the son of former All Black midfielder Sam Tuitupou. In 2021, Essendon helped Kelston to an 18-0 record and a first 1A Auckland championship since 1998.

Torian Barnes and Will Stodart were a formidable presence in the loose for the St Andrew’s College First XV that won the Miles Toyota Championship in Canterbury in 2020. STAC turned 100 that season, winning the championship for the first time since its inception in 2001.

Woods is a building apprentice and has dedicated the tour to his friend Tom Walsh who tragically passed away last year.

“When that happened it really flipped everything upside down. It was a really tough time for us boys close to him.

“We had his unveiling two weeks ago and that was a bloody mish to get to. I drove down to Auckland with my Mum to catch a flight to New Plymouth but all the flights had been cancelled and I couldn’t get another flight so we drove in the middle of the night to get there. Thank goodness we did. It was special.

“Tom’s death has given me another reason to get up and keep fighting. I’ve got him with me and I’m going to take him as far as I can go.”

Aisle be Back: Lions v Auckland (plus some semi-final stats and tidbits), Women’s WC and ABs

Wellington v Taranaki 1953: the high point of a golden year