Skip to content
You are here
Home > Latest News > At Last, the Ranfurly Shield is back 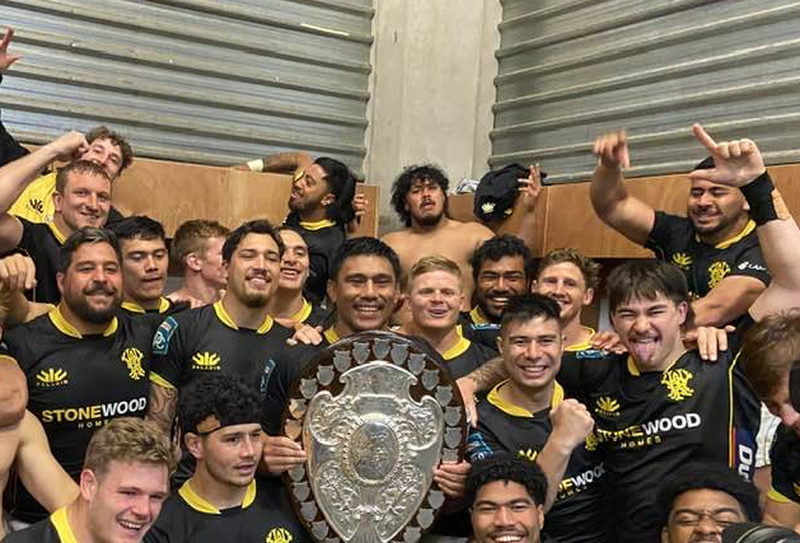 After 4,767 days the Ranfurly Shield is finally back in Wellington following the Lions 19-12 victory over Hawke’s Bay at McLean Park in Napier. A TJ  Perenara try and four penalties and a conversion to first-five Aidan Morgan was enough to blunt an unusually inaccurate Hawke’s Bay whose points were scored via four Lincoln McClutchie penalties.

Wellington held an opponent tryless for the first time in 81 matches, the last time that happened was in a 53-3 win against Southland in 2015. Earl Va’a was the coach and James Blackwell, Jackson Garden-Bachop and James O’Reilly were the only members of the 2022 squad.

The last time Hawke’s Bay failed to score a try against Wellington was in a 30-6 loss in 2008. All Black halfback Alby Mathewson (from Hawke’s Bay) scored a try for Wellington, Daniel Kirkpatrick, product of Napier Boys’ High School, kicked two conversions and two penalties.

2008: Tasman, 26-20 – A hapless defence against a young Union in their first crack at the Log. Hosea Gear, Jeremy Thrush and Thomas Waldrom scored tries. Piri Weepu kicked two penalties and a conversion with Daniel Kirkpatrick adding another penalty.

2008: Southland, 28-19 – An NPC semi where Southland gave Wellington a run for their money but didn’t last 80. Hosea Gear scored two tries in a season he scored a record-breaking 14 for Wellington.

2008: Canterbury, 6-7 – Piri Weepu left his kicking boots over the Wainuiomata hill. Wellington lost yet another NPC final to Canterbury, one they should have won!

2009: Wairarapa Bush, 90-19 – In the first  Ranfurly Shield defence of the 2009 season, Jason Woodward scored twice on debut as Wellington achieved their biggest score since they beat Rosario 118-17 in 1995. In that match Simon Mannix kicked a record 14 conversions and Wellington scored 18 tries.  Wellington’s win in this midweek game in Masterton is their largest in Ranfurly Shield history.

2009: Wanganui, 61-6 – Ranfurly Shield defense III, and before they put an H in Wanganui. Alapati Leiua scored twice for Wellington and will likely feature for Waikato in Wellington’s first defence on Saturday.

2009: Otago, 23-19 – First defence of the actual 2009 NPC season. Otago suffered another heartbreaker (they went from 1957-2013 without winning the Log) Lock Daniel Ramsay, a Maori All Black, scored a try for the Lions. Daniel Kirkpatrick kicked a drop goal.

2009: Hawke’s Bay, 21-13 – A scrappy road win against the Magpies. Winger David Smith scored a quality try for the Lions. He later did alright in France.

2009: Bay of Plenty, 17-21 – Sean Horan, first coach of the hugely successful Black Ferns Sevens, mentored the Steamers this day, the only retrospective excuse Wellington had for misfiring in this one.

2009: Auckland, 16-15 –  Hosea Gear and John Schwalger tries in addition to a Fa’atonu Fili dropped goal to keep the Shield safe for another week.

2009: Canterbury, 14-36 – Wayne Smith might have been offside in 1982, but there was little to dispute about this hiding. Wellington were pumped, and later lost to Canterbury (again) in the NPC final in Christchurch. Hosea Gear and Ma’a Nonu were the Lions try scorers.

7 October – The Spotify music streaming service was launched in Sweden.

4 November – Democratic U.S. Senator Barack Obama is elected the 44th President of the United States, making him the first African-American to be elected to the office.

19 November – John Key is sworn in as Prime Minister of New Zealand.

13 December – John Drake was the first 1987 World Cup winning All Black to pass.

6 March – Retrial of David Bain (which one?) begins in the Christchurch High Court.

29 August – Cristiano Ronaldo makes his debut for Real Madrid, scoring a penalty in their 3-2 win over Deportivo La Coruña.

A Short Tenure, 1963: On August 31, Wellington defeated Auckland 8-3 to end Auckland’s then record 25 defences with the Log. Fred Allen established his coaching reputation in this era. Marist No. 8 and Junior All Black Paul Russo (1969, Billy Wallace Best & Fairest winner) scored the only try of the game on a heavy field. All Black fullback and stand-in captain Mick Williment kicked a conversion and a penalty.  All Black prop Ken Gray was ruled out as captain with a broken hand. Wellington lost the Shield on September 7 to Taranaki, 3-17.  Williment kicked a penalty. Taranaki under the coaching of future All Black mentor J.J. Stewart would hold the Log for 16 defenses until 1965.

Wellington’s first defence of the Shield in this tenure is against Waikato at Sky Stadium in Wellington on Saturday at 4:35pm. Waikato has a proud history with the Ranfurly Shield winning the Log for the first time in 1951. They have played 110 games for 67 wins, 39 defeats and three draws. They last held the Shield in 2018.

August 1, 1953 – At Rugby Park, Hamilton, Wellington ended Waikato’s tenure with the Shield. All Black legend Ron Jarden scored all the points, a try and two penalties in a 9-6 success.

September  30, 1981  – NPC winners Wellington thrashed Waikato 22-4 at Rugby Park,  Hamilton to lift the Shield for the first time since 1974. All Black wings Bernie Fraser (2) and Stu Wilson scored tries. All Black fullback Allan Hewson added two conversions and a penalty and first-five Jamie Salmon who played for the All Blacks and England kicked a dropped goal.

September 18, 1999 – In the midst of 21 consecutive defenses, Waikato foiled Wellington 30-24 at Rugby Park, Hamilton. All Black wing Roger Randle scored a classic try and All Black second-five Matt Cooper scored half of Waikato’s points. Ali Koko, a Manu Samoa international from Johnsonville, scored twice on the wing for Wellington.