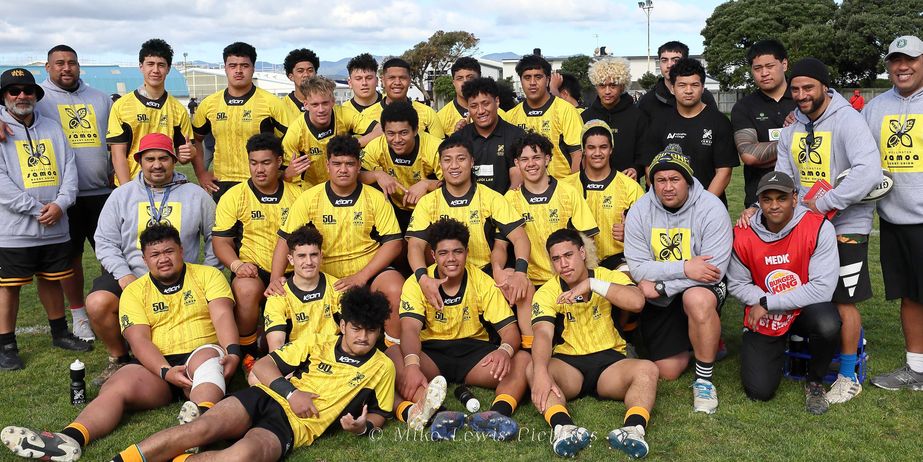 The Wellington Samoans U18s after their 52-12 win this afternoon over the Wellington Māori U18s at Evans Bay Park. The Samoans will play top qualifier the Hawke’s Bay Saracens U18s in next week’s final.

The Wellington Centurions completed their 2022 campaign with a comfortable though perhaps unconvincing 26-12 win over the Tasman Development side at the Petone Rec this afternoon.

Playing into the breeze in the first spell, Tasman started the brighter of the sides. A charge-down of a Kyle Preston clearing kick at the first ruck saw them camp inside the home side’s half for the first five minutes and got their reward when openside Connor Higgins crashed over.

But within five minutes the Centurions were ahead; firstly first-five Harrison Boyle was able to exploit a gap in the Tasman defence and fed centre Pena Va’a who put his Ories clubmate and Ethan Webster-Nonu across and followed soon after by lock Ezekiel Fiso who barged over from close range with Callum Harkin adding the extras to both.

The Centurions third try come inside the opening quarter and was a thing of beauty.

The set piece move off the back of an attacking scrum saw Harkin on the wrap and Tasman made the mistake of holding off tackling him, so he just kept running and went over in the tackle of two defenders.

Harkin was in the thick of it again for the hosts fourth; an overthrown Wellington lineout was dragged in by Tasman hooker Josh Te Hira but his decision to fire the ball backwards was horribly misguided. Harkin swooped on the loose ball, linked with  former Tasman age-grade player Isi Saumaki down the left, and then popped an overhead pass to his OBU teammate and halfback Preston who dotted down.

The second half proved somewhat anti-climactic after the opening 40 with much of the game taking place outside of the 22’s, and it lost some shape with both sides making a raft of substitutions. Wellington proved unable to make much headway against the combination of the breeze and a stiffened Tasman defensive effort while the visitors were unable to make much use of the ball they did get. They did have the small solace of the only score in the period, when a break by centre Noah Foster was finished by captain and fullback Jack Gray.

Harkin was the Centurions best with his mercurial skills to the fore while the inside back pairing of Preston and Boyle dictated matters well. Up front hooker Penieli Poasa and openside William Rua were busy and captain Hugo Plummer dominant at lineout and kick-off. Higgins was the visitors best, at full throttle for the full 80 minutes.

At Lyndhurst Park, the visiting Hawke’s Bay Saracens U18s beat the Wellington Centurions U18s 26-5, in a workmanlike victory rather than one that will set the highlights reel alight.

Most importantly for the Hawke’s Bay U18s was that their fourth and bonus point try barely a minute from fulltime was enough to see them finish as the Hurricanes U18s competition’s top qualifier and earn home advantage for the Trustbank Secondary School Shield final next weekend.

Hawke’s Bay will have home advantage*for the final next week against the Wellington Samoans U18s in the 1 v 2 decider,

In the other U18 competition match today, the Wellington Samoans U18s beat the Wellington Māori U18s 52-12, after leading 26-12 at halftime at Evans Bay Park.

Hawke’s Bay and the Saracens both finished the three-match round-robin on 15 points, but Hawke’s Bay are top qualifier on points differential – 77 to 57.

Both the Poverty Bay and Whanganui teams had the weekend off.

*The actual venues haven’t been decided, but all three Wellington teams will be playing somewhere not of their choosing next weekend.

Hawke’s Bay was only able to string several fluid phases of play together all match and four of them resulted in tries. That and strong defence was enough to see them hold off the Centurions challenge.

The Centurions were the more adventurous of the two sides, held their own in scrums and dominated the lineouts as the match progressed, with Scots College lock Harry Irving playing well throughout. The Centurions deserved to have finished closer.

Hawke’s Bay went into the match fielding no fewer than 12 of their 18 recently selected Hurricanes U18s reps, whilst the Centurions had one, St Pat’s Silverstream hooker and captain Toby Mallon.

Hawke’s Bay played with the breeze in the first half and scored each of their first two tries at the very beginning and very end of the half, the first scored by strapping Hastings Boys’ High School No. 8 Matolu Petaia and the second to his Hurricanes U18s and Hastings BHS teammate and blindside Aone Lolofie. They led 14-0 at the turnaround.

The Centurions weren’t without chances to get on the board in the first spell, Wellington College No. 8 Vati Vulu helping them go close on two occasions and Wellington College left wing Sam Meo and Scots College fullback Callum Koeburgh both making clean breaks that stretched the Magpies thin at different times. Hawke’s Bay gave away a steady supply of ball through multiple breakdown penalties and eventually Napier Boys’ High School second five CJ Meinie was sin-binned for these offences.

Hawke’s Bay should have scored their third try immediately after the interval but made an error in the corner after a penalty and attacking lineout.

The Centurions cleared but Hawke’s Bay subsequently turned over their lineout ball 40 metres out and worked their way up field and Napier BHS hooker Tyrone Chrystal came up with their third try to make it 19-0.

The Centurions played well over the next 20 minutes, the highlight being fullback Callum Koeburgh scoring the best try of the match. From a penalty and attacking lineout, the Centurions ripped it wide and he scored in the left hand corner.

The Centurions fought hard to score again but couldn’t break through again. They had opportunities through at least two attacking scrums and more lineouts in the 22. With several minutes to play, Scots College first give Kobe Waikato laid on a lovely 50-22 kick into the corner, but this wasn’t called and Hawke’s Bay escaped the danger once more.

Right at the end, Hawke’s Bay packed down a scrum 40 metres out and attacked up the embankment side of the ground into the Lyndhurst Park corner. Unlike earlier opportunities, they kept the ball alive and worked it in-field and No. 8 Petaia dived in under the poles to score his second and their fourth try.