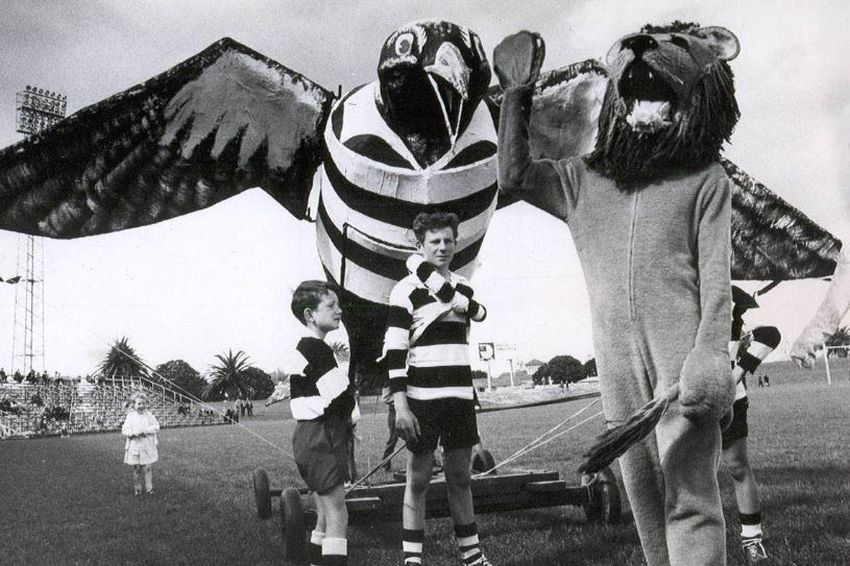 Hawkeye and Leo the Lion in the 1960s, prior to another tight tussle between Hawke’s Bay and Wellington.

It was recently asked of a long-time supporter what would you rather Wellington held at the end of the season if you they could have one but not the other, the National Provincial Championship title or the Ranfurly Shield? The answer was unequivocally the latter.

This coming Saturday the Lions, who are 5-2 in the NPC thus far, challenge the Hawke’s Bay Magpies for the Ranfurly Shield.

Wellington teams don’t get many shots at this these days, it seems, but the last two were both against Hawke’s Bay as well. The first of these was in 2014 in which the home side won 36-14, the second inside two years ago in November 2020 when the Magpies prevailed 34-18.

Saturday’s fresh challenge will be the 100th match that Wellington has played for the Ranfurly Shield, either as a holder or a challenger, since their first in 1904. Of the 99 to date, Wellington has won 50, lost 43 and drawn six.

Prior to these recent challenges against Hawke’s Bay, the last one before that was on 20 September 2008 against Auckland, winning 27-0. The side went close to also winning the NPC, falling in the home final to Canterbury.

The Shield is currently held by Hawke’s Bay, who won it from Otago in a 28–9 victory on 4 October 2020. This was the second time in 2020 that a team lost the Shield a week after winning it.

Wellington and Hawke’s Bay have previously met in 11 Ranfurly Shield matches, between 1905-2020.

Their head-to-head record in these matches stands at seven wins to Hawke’s Bay, three to Wellington and one draw.

Of the 11 challenges, 10 have been unsuccessful. The one successful challenge was Hawke’s Bay’s 19-9 win in Wellington on 9 August 1922.

The closest unsuccessful challenge was the 12-12 draw in Napier in 1967, with Hawke’s Bay retaining the Shield with a late dropped goal by Blair Furlong.

The largest win was in 1926, Hawke’s Bay defending the Shield with a 58-8 win over Wellington. This was in the era of three-point tries, so a thrashing.

In 1982 at Wellington, it was a late try, converted from the sideline by Allan Hewson that saw Wellington win 13-12 and retain the Shield.

Hawke’s Bay have successfully defended the Shield against Wellington in Napier on six occasions, most recently in 2020. They also took it ‘on the road’ to Athletic Park and defended it away in 1925.

Wellington had also beaten holders Auckland 6-3 in the inaugural Shield challenge match at Alexandra Park on 6 August 1904. Auckland were presented with the new Shield that was donated to the NZRU by Lord Ranfurly at the end of the 1902 season as they were recognised as the leading provincial union at that time. As all Auckland’s matches in 1903 were on tour it their first defence was against Wellington in the first home match of the following season.

Wellington has since won the Shield 10 times, as follows (challenges resisted in brackets):

Wellington won the Ranfurly Shield off Taranaki (12-6) in 1914 and resisted a record 15 challenges before losing it to Southland in 1920, although no matches were played between 1915 and 1918. The loss to Southland was significant in that Wellington decided to take the Shield on ‘tour’ with them to the South Island. They successfully defended it away in Timaru to South Canterbury (32-16) and in Dunedin to Otago (16-5), before relinquishing it to Southland in Invercargill (6-17).

The following year in 1921 Southland returned the gesture to Wellington and brought the Shield north after one successful defence at home against Otago. Wellington duly obliged and recaptured the log (28-13), before in turn losing it to Hawke’s Bay (9-19) three defences later in 1922.

Wellington next won the log o’ wood in 1963 when they beat Auckland 8-3 on 31 August and then lost it to Taranaki (3-17) a week later on 7 September. This is a joint record (with Waikato) for the shortest tenure – seven days.

Over the next decade Wellington played in five unsuccessful Shield challenges – 0-3 and 3-11 against Taranaki in 1964 and 1965, 12-all and 6-14 against Hawke’s Bay in 1967 and 1969 and 3-3 against Canterbury in 1970. The two draws against Hawke’s Bay and Canterbury were particularly close, with Hawke’s Bay first five-eighth Blair Furlong kicking a last-gasp dropped kick to retain the Shield in Napier and Canterbury fullback Fergie McCormack stepping up to kick a last minute penalty in Christchurch.

Wellington fans’ patience went rewarded in 1981 when the team travelled to Hamilton for a mid-week challenge and took the Shield off Waikato 22-4. This was the last game of the season and they also won the second of their four NPC titles to date that year.

Wellington’s next challenge against Auckland in 2008 thus came some 26 years and two days after the Capital last held the Shield, and followed 10 unsuccessful challenges between 1983-2005.

They beat Auckland 27-0 at Eden Park, returned home to stave off Tasman in one successful defence, before defending it against Wairarapa-Bush, Wanganui, Otago and Auckland. Canterbury came to town on 29 August 2009 and won 36-14.

Wellington, Hawke’s Bay and the Ranfurly Shield in the 1920s

When Hawke’s Bay won the Ranfurly Shield off Wellington in 1922:

Wellington, Hawke’s Bay and the Ranfurly Shield in the 1960s