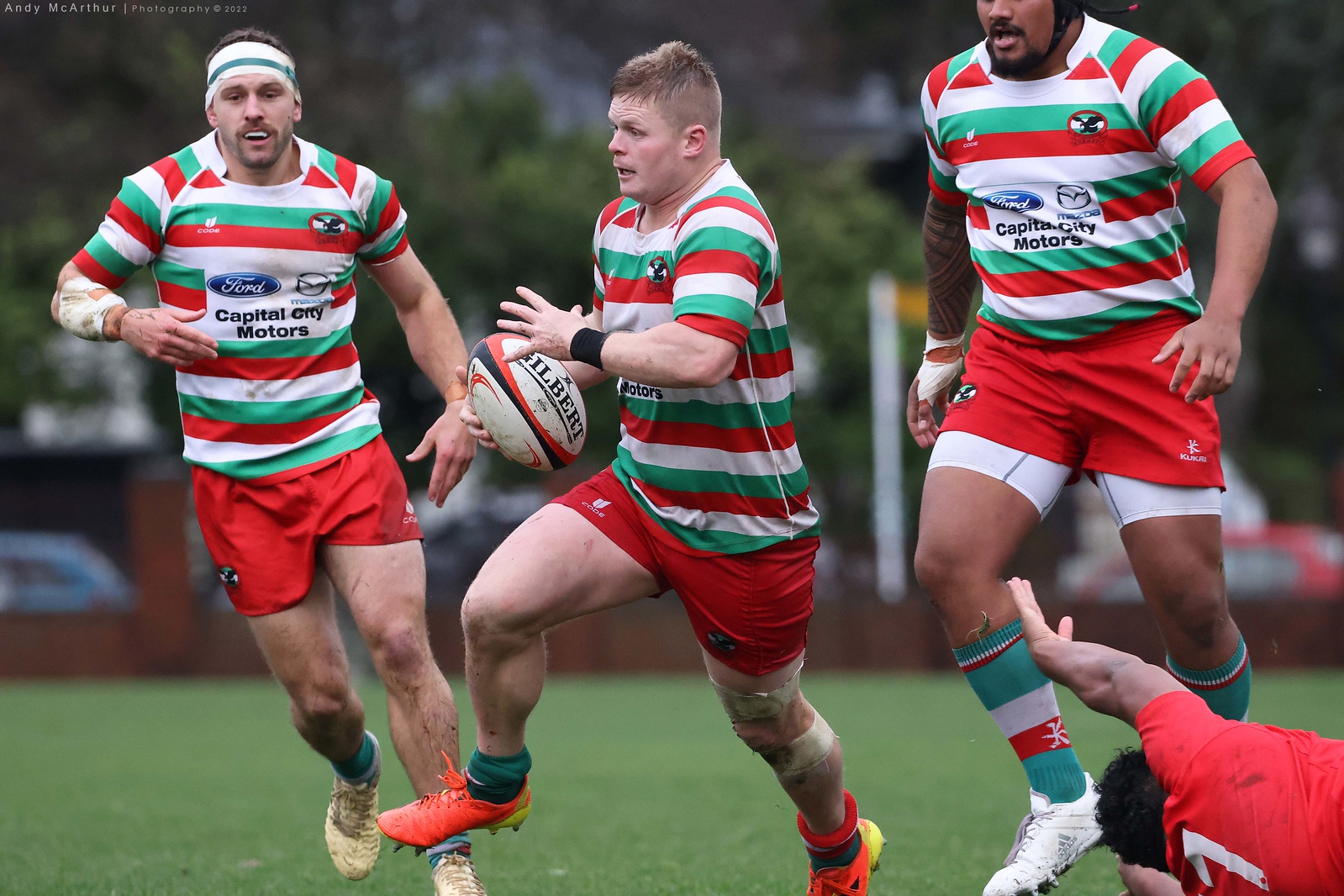 James O’Reilly playing in his 100th game for HOBM earlier this year, against Marist St Pat’s, the team he scored his first Premier try against in his first year out of school in 2013.

James O’Reilly and his Wellington Lions teammates will be hoping its lights out for the Hawke’s Bay Magpies this coming Saturday night when they meet in the seventh round of the National Provincial Championship and for the Ranfurly Shield.

O’Reilly, who played his 100th club rugby match for the Hutt Old Boys Marist Eagles earlier this season, acknowledges the Magpies as being a tough side to crack at home.

“Hawke’s Bay at home are probably one of the toughest teams to play. No matter how they are faring when they play away, as soon as they step back on to their home field, they are a completely different beast, said the Lions hooker and part-time self-employed electrician who downed tools to chat with Club Rugby this week.

The Magpies also always reserve extra fervour for matches against Wellington, a rivalry that goes back to the 1920s and reached its zenith in the 1960s and is carried on in the modern era.

This will be Wellington’s third Ranfurly Shield challenge since 2014 – all against Hawke’s Bay – and O’Reilly and first five Jackson Garden-Bachop are the two current Lions squad members to play in both of the others.

“We have definitely spoken about the significance of the Shield being on the line this coming Saturday, but we are just focused on how we can attack them and give it our best shot to beat them and the rest will fall into place from there.

“In everyone’s career it is rare you get an opportunity to challenge for the Ranfurly Shield. Some players go their whole career without getting a shot at all, so the Lions guys will know this is a chance for them.”

O’Reilly said that overall, the Lions are satisfied with their season to date

“We had those early losses to Canterbury and then Northland. Against Canterbury we played a good first half and then slipped and then against Northland we didn’t play to the conditions.

“I think a big thing for us was just going 3-3 in our Storm Week. Getting that famous win against Tasman, for a lot of us that was a first against them, and then to come back home and beat Otago on the weekend.”

Wellington made a rollicking start against Otago before surviving a comeback and holding on to win 32-26. Did fatigue set in?

“A lot of people would say it’s because of the end of Storm Week and the boys were tired, but it was more a case of us just letting ourselves down a bit in letting the foot off the throat.”

“We let them get three tries off our maul defence, which was pretty disappointing, especially being  a forward.”

O’Reilly said that this is an area they will need to improve to take on Hawke’s Bay.

“It’s not just this year, they have had their famous lineout drive for years. What we have spoken about is our discipline. If we give away easy penalties in the middle half of the field, then that gives them the opportunity to kick for the corner and put their drive on.”

“It took a bit longer that what I had perhaps hoped. I was stuck in the 80s for about three seasons, with injuries and being involved with the Hurricanes as well.”

O’Reilly rates 2014 when the side last won the Jubilee Cup as a club rugby career highlight.

“Plus of course every year when we play Petone for the McBain Shield. Win or lose it is always one of my favourite games to play. Especially because the majority of guys I went to school with and played with moved to Petone. I was the only one to take the HOBM path from HIBS from my year group. So every chance we get to play Petone is one of the games I look forward to.”

He missed the end of this year’s crazy McBain Shield match, won by Petone 27-20 in injury time.

“We were over in Australia with the Hurricanes. I was watching the livestream, but we had to start our warm-ups. When I left we were up by quite a bit but then came back and saw the final score – but it wasn’t until later on when I saw a video on Instagram that I realised what had happened.”

O’Reilly has played about 20 matches for the Hurricanes since 2017 and was part of the squad this year in a campaign that featured nine hookers.

He won’t be returning next season. Instead, he’s going under the knife soon after the conclusion of the NPC.

“I have torn my labrum in my shoulder. This was a couple of years ago, but it got worse, and to top that off I have a bulged disc in my neck which have been causing me a lot of nerve damage pain throughout the season.

“So it was about time I got that fixed because it was starting to get to the point where it was causing me a lot of discomfort in my arm.”

Plus there have been separate knee and hamstring injuries in recent times.

The upshot is he is taking six to nine months off rehabbing from impending surgery and to hopefully get his body right.

All going well, he will return to rugby towards the end of the club season in 2023, and he hopes he has plenty more to give back to the game in the future.

He currently fits has his electrician work around rugby, but this will be put on hold too whilst he rehabs. He works for himself and sometimes with his dad Paul who is a former No. 8 and some-time front-rower for Hutt Valley Marist.

“I did my apprenticeship through my father. I joined the WRFU Academy straight out of school in 2013 and we were training every morning and finishing at 9.00am. My old man said you are sitting around not doing anything so come and work with me.

“I have got a few mates who are builders, so I do a bit work with them and do jobs that I can fit in when I can.”