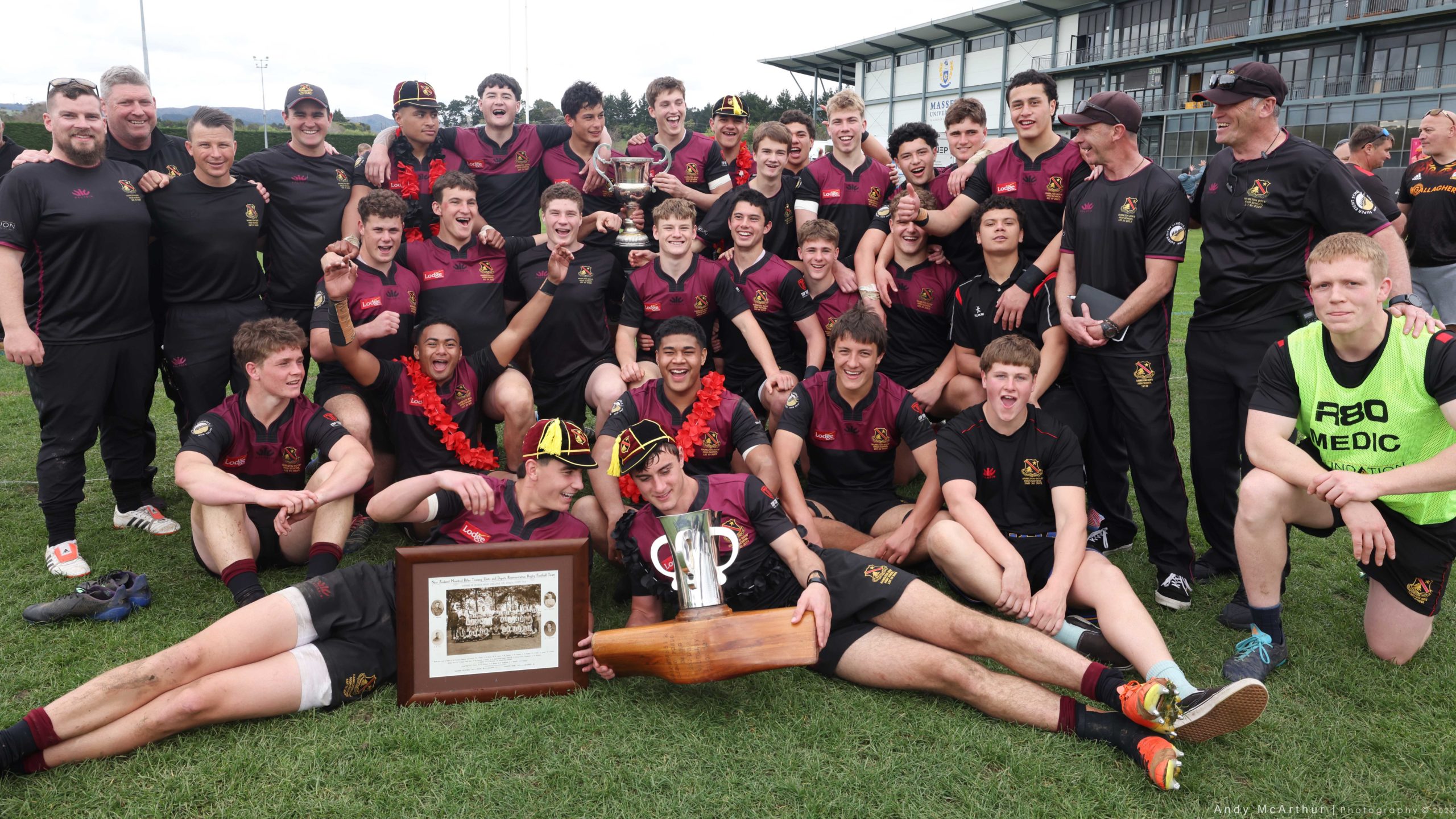 The engraver will put the names of MANUKURA and Christchurch Girls’ High School as joint winners in 2022 on the Hine Pounamu Trophy, after the two schools drew 19-19 in the first final of the day.

But did MANUKURA rob themselves of one last chance at the death, when they were awarded a penalty 35 metres out and after a brief on-field consultation chose to kick the ball dead and end the game.

The kick was probably too far out for MANUKURA’s halfback and kicker Maia Davis, but many were left wondering why they didn’t take a quick tap and attempt to conjure a final play try or win another penalty closer to the line instead?

As it was, MANUKURA were left lamenting an outright trophy win and a final, likely by their own admission, they let slip.

MANUKURA let a 19-0 lead evaporate and later when still leading 19-12, Davis missed two consecutive penalties on goal from inside the 22, the first a sitter under the poles which she mis-hit and it sliced away.

Leading 14-0 at the halftime interval, MANUKURA quickly extended their lead when fullback Nia Sutherland scored a well-worked second phase from an attacking scrum, running on to a skip-out pass across the posts and scoring untouched.

CGHS were committed and relenting all day at the breakdowns, and a turnover from a partial charge-down of a clearing kick at a ruck on the 22 resulted in second five Kelera Qalivutu scampering 20 metres to score to make it 19-5.

Five minutes later, CGHS first five Poppy Baxter (daughter of Canterbury FPC coach Blair Baxter) rushed up on defence in centre field and intercepted a pass and sprinted all the way to score. The conversion by fullback Harriet Cochrane made it 19-12.

Surviving another momentum shift and MANUKURA raid up into their red-zone, CGHS regrouped and did the same at the other end. They built pressure through phase play and  MANUKURA blindside flanker Huia Whakatihi-Heremaia was sin-binned and CGHS finally scored again through halfback Rylee Munro. Replacement Zoe Gullery slotted the conversion and it was all square with several minutes still to play.

Neither side was able to break the other again, and the match finished that way with MANUKURA kicking it into touch at the end.

Perhaps fittingly, the match ended on a penalty, with no fewer that 32 penalties blown throughout the game which blunted much of the flow.

The first half was dominated by whistle, both sides making mistakes in the slippery underfoot conditions following morning rain, and both conceding numerous penalties.

The latter would prove costly for CGHS after hooker Grace Meecham was sent to the sin-bin in the 19th minute for repeated breakdown infringements.

In her absence, MANUKURA would score both their first half tries, giving them a 14-0 lead at the halftime interval.

The first of these saw halfback Maia Davis accelerate into a hole in centre field from halfway and free up No. 8 Pounamu Wharehinga who out paced the covering defence and ran round to score under the posts. Davis’ conversion made it 7-0.

The second came after Davis freed up centre Hope Stanshall near the corner from a short-range burst but the latter was bundled into touch. From the next play, CGHS made a terrible hash of their defensive lineout and MANUKURA openside flanker Alizay Grant only had to dive on the ball in the in-goal to score and double her side’s lead.

Earlier, the opening 10 minutes and much of the next 10 minutes after that was dominated by CGHS. Like they had against St Mary’s in their Hurricanes semi-final and against AGGS in Friday’s semi-final, they defended stoutly.

CGHS fullback Cochrane missed with an early penalty shot and should have scored following a sustained raid up into the 22.

There have now been seven draws in Nationals finals. They are:

In a game that was brutal and tactically cautious, especially Napier, the climax was box-office.

With two minutes remaining Napier was ahead 15-12 and tried to quarantine the ball among their forwards. Hamilton resisted so Napier spread to midfield. Diminutive second-five CJ Mienie was barreled in a tomahawk of a tackle fumbling possession. Hamilton right wing Caelys Putoko pounced on the spillage at the ten-metre mark Napier territory and screamed to within five meters of the line, denied desperately by feverish chasers.

Hamilton was patient (unusual throughout) exploring the left side where there was no hole. Back right Napier was cooked, the stubborn blue wall finally exhumed of all oxygen. Fittingly, Putoko finished.

It was a harsh end for ‘beast’ Mienie. His bravery, intelligence and industry on defense was heroic, a symbol of Napier’s heart. Five minutes earlier he made a try saving tackle on the opposite winger who was considerably larger and faster.

In the first-half Napier resisted persistent and expansive Hamilton attacks for 10 minutes until they finally arrested some territory. Napier’s rolling maul is their most potent weapon and after a strong thrust at the Hamilton line, blindside George Mason wouldn’t be stopped from close range.

Napier rallied and took a 12-5 lead to the break when the ball made a rare visit beyond ten and fullback Josh Augustine capitalised on an overlap. The forwards had created the space with their uncompromising, close-quarter raids.

It took 17 minutes for any scoring in the second-half. Napier First-five Cory Berkett slotted a 25-metre penalty after Napier had predominantly been in retreat.

Hamilton’s bench added punch and the wave of sustained attacks continued. In the 59th minute centre and captain Aki Tuivailala stepped off the right foot as the Napier line rushed left, too late. The conversion by fullback Payton Spencer (son of All Black Carlos Spencer) cut the deficit to 15-12.

Tactically Napier turned the match into a slog but Hamilton is battle-hardened and with the exception of their semi-final blowout on Friday, had won their last two games by a combined four points. Their greater ambition and ability to execute when it most counted made them worthy champions. The winning moment by Putoko, a graceful and dynamic preformer, wasn’t the only occasion he terrorized the Napier defense. The ‘factory’ delivers again.

The referee was Jack Sargentina from Wellington.