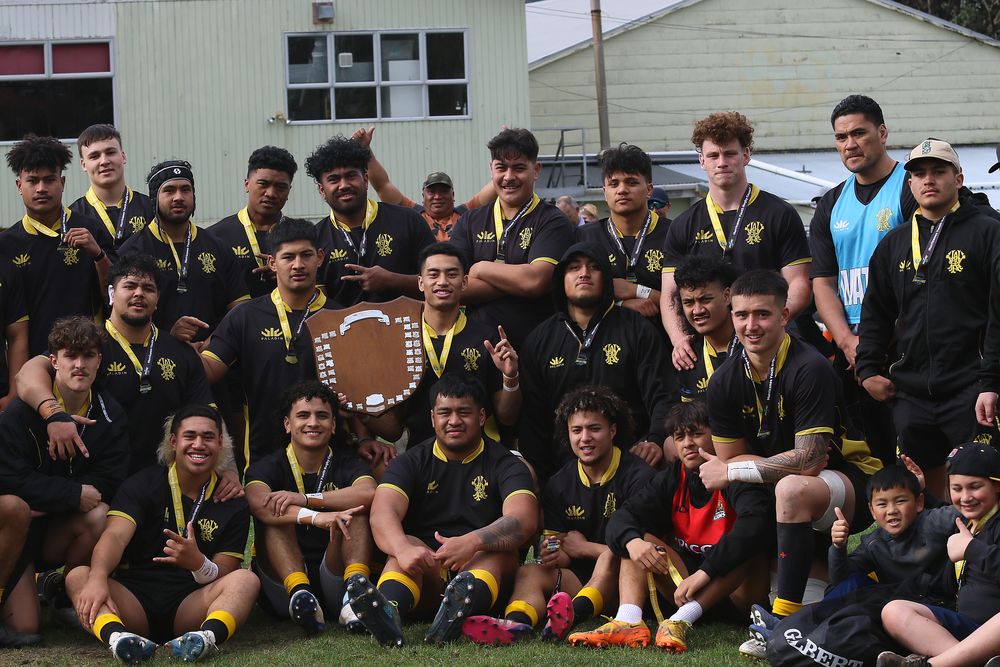 Members of the Wellington U19s with the Central Region Shield following their win over the Manawatu U19s at Lyndhurst Park this Saturday.

The Wellington Centurions men’s side bounced back from their defeat to Manawatu last week to comfortably beat the Hawke’s Bay Saracens 55-17 at the Petone Recreation Ground this afternoon.

The Centurions started well with hooker Josh Southall scoring from a lineout drive after 10 minutes.

First five Harrison Boyle scored five minutes before the break and then Hawke’s Bay were putting on pressure when a turnover lead to Callum Harkin breaking out of his 22 and finding Zane Ainslie in support to score making it 24-5 at halftime.

Hawke’s Bay needed to score first after the re-start and did so – but halfback Logan Love was able to strike back.

Again, Hawke’s Bay was applying pressure inside the Wellington 22 before Harkin intercepted and raced 70 metres to make it 38-12.

Immediately Southall made a huge run and gave it to replacement halfback Kyle Preston in support to run in another try.

Faleafaga then scored two more tries for his well-deserved hat-trick.

Hawke’s Bay centre Kienan Higgins then picked up a loose ball to race 50 metres on fulltime for the final to score their third and final try of the afternoon.

The Wellington U19s retained the Central Region Shield at Lyndhurst Park, Tawa this afternoon with a 48-15 win over the Manawatu U19s.

Wellington won the match eight tries to two, but only pulled clear of the competitive Junior Turbos visitors later in the second half so the winning margin was somewhat flattering.

In terms of a spectacle, it was a mostly stop-start match. The first half saw both sides concede far too much of their own ball at set piece time, resulting in no fewer than nine combined lineout turnovers and three from scrums. Both sides conceded a barrage of breakdown penalties in the second half.

As far as the winning of the game and the shield was concerned, that moment came approximately 10 minutes into the second half when dynamic Wellington openside flanker Toby Crosby stole the ball in a ruck and ran 70 metres to score a solo try. This was Wellington’s bonus point try and it gave them breathing space at 24-10 up.

Over the remainder of the match, Wellington doubled their try tally with tries to captain and blindside flanker Dominic Ropeti (2), right wing Keisar Vailalo  and replacement outside back Tyrone Maraku.

Wellington had led 19-7 at halftime, but Manawatu first five Isaiah Armstrong-Ravula kicked a 38-metre penalty to cut the lead to 19-10.

Crosby replied with his try, but Manawatu hit right back with their second try and final scoring play of the match through a penalty into the corner and a lineout drive.

Wellington brought fresh legs on from the bench and kicked clear, although the last 20 minutes of the game was also reduced to uncontested scrums.

Wellington had played with the breeze in the first half and opened the scoring with a try to No 8 Pene To’o, running hard at the line after collecting a Ropeti pass. The conversion by first five Chicago Doyle put the home side up 7-0.

Wellington’s second try to regain the lead was created from a scrum turnover, from which Wellington’s backs went wide to left wing Garry Tuilekutu who beat his marker on the outside and scored in the corner.

Wellington’s third try of the first half also saw Tuilekutu involved in space after a switch in play in centre field, and the left winger finding halfback Muri Stewart on his inside who scored near the posts.

The Hawke’s Bay U19s sealed second in this year’s U19 competition with a 39-27 win over the Hurricanes Heartland U20s in Napier.

Wellington scored the opening try (a burst from hooker Eli Hunt) but a retreating scrum and wobbly lineout, coupled with clinical breakdown play and clever tactical kicking by the visitors, soon saw Canterbury establish a 24-10 lead.

A scuffle resulted in dogged Canterbury No.8 Louis Harmon and Wellington lock Dylan Williamson being sin binned. Things got worse for the hosts when they conceded a red card for a high tackle just before the break and first-five Rory Wollett was seriously injured out of the game with an ankle sprain resulting in a transfer of fields.

Canterbury led 31-10 at the interval.

With half an hour left a romp appeared likely with Canterbury leading 45-10. However, wing Jason Love scored an epic try when he collected a kick between his legs, close to his ankles, and screamed 50-metres clear, knocking the fullback out of his way on the pathway to the line. A rolling maul try cut the gap to 45-24.

Canterbury were most worthy winners though and fittingly gun fullback Keegan McGregor had the final say when he sprinted 70-metres. His sideline conversion which rebounded off the left-hand upright completed a faultless 9/9 kicking display.

Right wing Sebastian Flynn was the smallest player on the park, but a real flyer rewarded with two tries. Lock Tepasu Kapene rampant and halves Tyson Kapene and Terrance Graham dominant, the later not dissimilar in approach or stature to All Black Richie Mo’unga

On Day One on Friday, Canterbury had beaten beat Hawke’s Bay 32-20 to earn their place in the decider while Wellington defeated Poverty Bay 58-7. Wing Khya Wilson was a standout with two tries and four conversions while No.8 Luke O Meri was powerful and scored a try. Second-five Andy Ellis played strongly in both appearances.

In the playoff for third in Division I today, Hawke’s Bay beat Poverty Bay 29-17 and the Te Upoko o Te Ika Development side beat Manawatū. 55-10 in the Division 2 final.

It is hoped this tournament will be a bi-annual event with Wellington set to tour Auckland and Counties in 2023 to entice those Unions to compete.

There were three second round Trustbank Secondary Schools Shield Boys U18 games today.

Plus Finals Day of the Top 4 tournament at Massey:

Plenty of college and representative rugby this weekend