Skip to content
You are here
Home > All Blacks > Pioneers of rugby in Wellington: 028 Frank Mitchinson 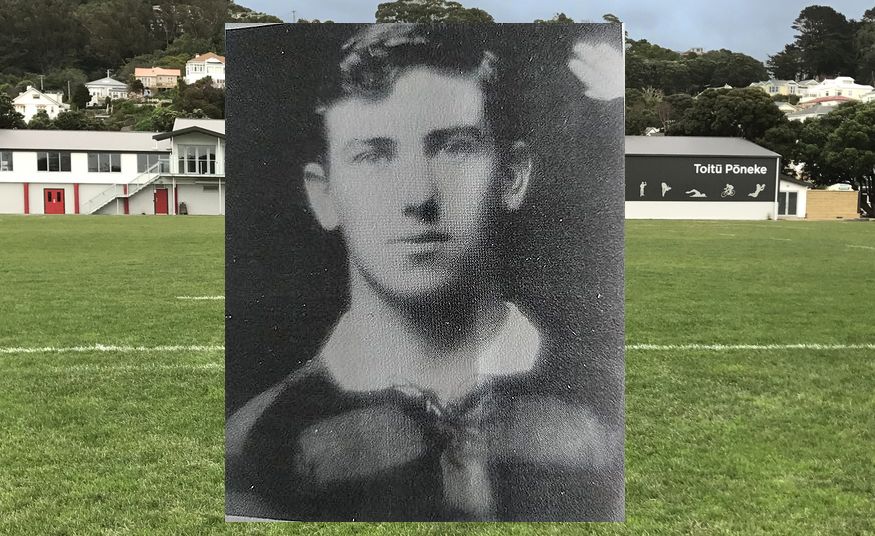 All sources tell us that Frank Mitchinson was all class.

He had speed, footwork and vision, and all those who played with – including his great Poneke, Wellington and All Blacks mate Billy Wallace – rated him up there with the best. Mitchinson was the sort of player who could slot into any era and rise to the top.

It seems centre was Mitchinson’s preferred position but he alternated frequently between the midfield and wing. But he would have had to have been a gym bunny to bulk up. Like many backs of his day, there wasn’t much to him and he was described as ‘slightly built.’ His playing weight was given as 10st 12lb, so 69kg dripping wet.

Mitchinson was a stalwart of Wellington and (briefly) Whanganui representative teams for several seasons in the pre-world war one era.

He made a hot start to his All Blacks career, scoring a hat-trick of tries in his Test debut against Australia. He went on to score 10 tries in 11 Tests, an All Blacks try-scoring record that wasn’t surpassed for six decades after his retirement when beaten by Ian Kirkpatrick.

Mitchinson was born in Lawrence in Central Otago in 1884, moving to Wellington during his school years. He was 20 when he first made the Wellington representative team in 1905, playing out of the now defunct Southern club. Wellington lost the Ranfurly Shield to Auckland (after winning it the previous year) and also beat the national team 3-0 a few weeks earlier, although Mitchinson’s name doesn’t appear in those teams.

It appears that he benefited from the positive, attacking style of play the team that became known as the All Blacks brought back from their tour to the U.K, Ireland, France and North America in 1905/06. This team was all conquering and made stars out of Wellington players such as Wallace and halfback Fred Roberts.

Mitchinson transferred to Poneke in 1906 and that’s when things started happening for him. There was no international rugby that season, so players concentrated on their club rugby and representative rugby. A noted game that Mitchinson played for Wellington was their 34-0 slaying of Canterbury, which was at the time the highest score by the winning side between the two provinces in 19 games since 1876. The following week he scored two tries and almost scored a third in Wellington’s 22-3 win over Southland at Athletic Park.

In 1907 he made the All Blacks for their nine-match tour of Australia, which included a three-test series. Prior to departure, Mitchinson made his All Blacks debut at centre in a 19-6 win over Wellington province at Athletic Park.

It was in the first test at Sydney before a crowd of 50,000 at the Sydney Cricket Ground that Mitchinson’s star ascended. The All Blacks won 26-6 and Mitchinson scored three tries playing at centre. His first try came after a break from near halfway and a dummy to beat the fullback. All Black fullback Billy Wallace made the final pass to Mitchinson for his second try, while his third was scored later in the second half.

In 1908 Mitchinson played in all three tests against the touring Anglo-Welsh side and played for Wellington against this team, scoring the final try of the afternoon playing on the wing in the 19-13 win for the home side over the tourists.

He continued his roaring try-scoring feats in this series, scoring two tries in the 32-5 first test win in Dunedin and another hat-trick in the third and deciding test in Wellington, won 29-0 by the All Blacks.

There was no international rugby in 1909, but in 1910 Mitchinson and the All Blacks travelled back to Australia. Once more, New Zealand met Wellington on the eve of departure. Wellington were in the game for long periods and led 12-11 at halftime. The All Blacks came back to win 26-17, with Mitchinson scoring the one of their second half tries to seal victory against his provincial teammates.

In Australia, the All Blacks won the first test 6-0 and Australia the second 11-0, to set up a series decider in Sydney. In a similar pattern to that pre-tour Wellington match, the All Blacks trailed 6-5 at halftime, before coming back to win 28-13 and with Mitchinson scoring a try.

Returning to Wellington, he again led Wellington to a comprehensive win over Canterbury in the last game of the season, scoring at least one try in their 26-9 win at home. Mitchinson led a Wellington backline in 1910 that ‘Dropkick’ in the Evening Post proclaimed as the best in the country.

Mitchinson played for Poneke and Wellington again in 1911, before making the move north to Raetihi to start farming. He played two matches for Whanganui in 1912.

Now aged 29 in 1913 he made the All Blacks again for their tour to Canada and the United States. At the time, rugby was the main code in California, although comparatively weak, and there were hopes it would expand and take off.

Four days later he captained the All Blacks to a 19-18 win over Wellington (his third match for the All Blacks against Wellington) before playing 12 of 16 matches on tour to North America and captaining the side in three of these.

His 11th and final test was the 51-3 defeat of All-America, before going out with a bang by scoring four tries in this last ever first-class match as part of a 44-0 win over Vanvouver on 24 November 1913.

Mitchinson returned to New Zealand and retired to his farm in Raetihi with a record of 21 tries in 31 games for the All Blacks.

In 1918 disaster struck in the form of a fire that swept through his district. He lost his house and some of his live stock and survived by sheltering in a river that ran through his property.

Aisle be Back: The upcoming Bledisloe Cup and the SA-Lions series

Club Rugby set to soar in round four