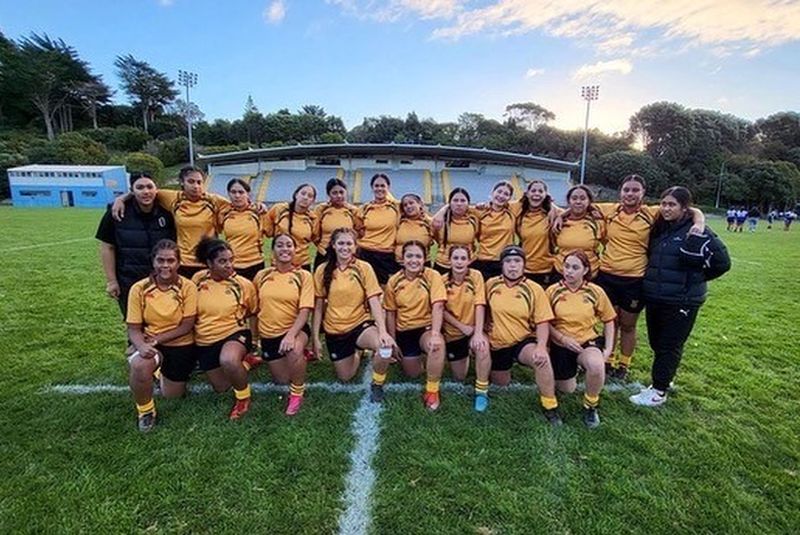 The Manurewa High School girls rugby squad at Jerry Collins Stadium during their trip to Wellington earlier this year. Coached by the late Jerry’s sister Brenda, Manurewa are heading to Palmerston North this weekend for the National Top 4 tournament.

Brenda Collins was a popular and successful teacher and rugby player in Wellington. She played 13 games as a utility back for the Pride alongside sisters, Helen and Tiana. Between 2006 and 2018 she was a member of the Norths Premiers. They won seven Tia Passi Cup Memorial titles.

The sister of late All Black Jerry Collins, made a similarly big impression in the classroom as a health and physical education teacher at Wainuiomata High School and Aotea College before becoming a lecturer for the New Zealand Institute of Sport.

She left Wellington in pursuit of a new challenge three years ago, settling at Manurewa High School in South Auckland. In the past week she has coached the girls First XV to their first National Top Four Championship appearance and helped the First XIII league team capture the National crown.

Remarkably all 22 girls from the rugby team were part of the league success. Furthermore 15 players are aged under 16 – Manurewa losing 40 percent of its Year 12 and 13 roll during the worst of the Covid pandemic.

“Manurewa is similar to Porirua in terms of the Maori and Pacific population, and the family oriented vibe of the school,” Collins said.

“When I left Wellington I needed a new challenge, and though I love Manurewa, unfortunately I’ve spent a lot of time in Wellington teaching online because of Covid.

“Lockdowns were very challenging for our student community. We had to seek support for extra computers and WIFI facilities. Many of our students never returned to school needing to work to support their families or were disengaged by the lack of real connection.

“From a sporting perspective we tried at home workouts and online coaching courses but that didn’t really work. The dynamics of home were another real challenge for learning. It’s been wonderful to have a full season this year. We know how lucky we are every time we play, and celebrating and embracing that opportunity has been our theme.”

At the start of the 2022 season Manurewa travelled to Wellington and were hosted by the Norths Rugby Club where they played pre-season fixtures against Norths Combined and St Mary’s College at Jerry Collins Stadium.

Manurewa is part of the Chiefs Regional qualifying zone for the National Top Four. They faced Counties rivals Wesley College in their first match to reach the tournament and won 22-15 on a last play try.

Things have been completely hectic since August 24. That Wednesday, Manurewa travelled to New Plymouth and destroyed Sacred Heart College 85-0 in the Chiefs Regional semi-final. Former All Black, and close friend of Jerry Collins, Chris Masoe met the team before the game.

Next Monday they had to topple Hamilton Girls’ High School to secure a place in Palmerston North at the Top Four. Hamilton are the defending National Champions, and in the last National final slayed Christchurch Girls’ High School, 58-7 in 2019. Manurewa stunned Hamilton, 27-10.

“It was a very tight game against a well drilled side. We defended with patience, got our basics right, and eventually expressed ourselves. It was a special win,” Collins said.

There was little time for celebration. At 6am the next morning Manurewa was on the bus to the League Nationals in Rotorua. They lost their first game to Auckland Girls’ Grammar School at 2pm.

Manurewa found their groove the following three days defeating Taikura (40-0), Te Whanau A Noa (54-0) and Southern Cross Campus (30-10) to set up a replay of their match with Auckland Girls’ Grammar School in the final.

Seven games in a dozen days, including six on the trot. Collins’ co-coach is Dannica Fatani, a longtime premier player herself in South Auckland.

Iona Apineru Hard to Knock Down