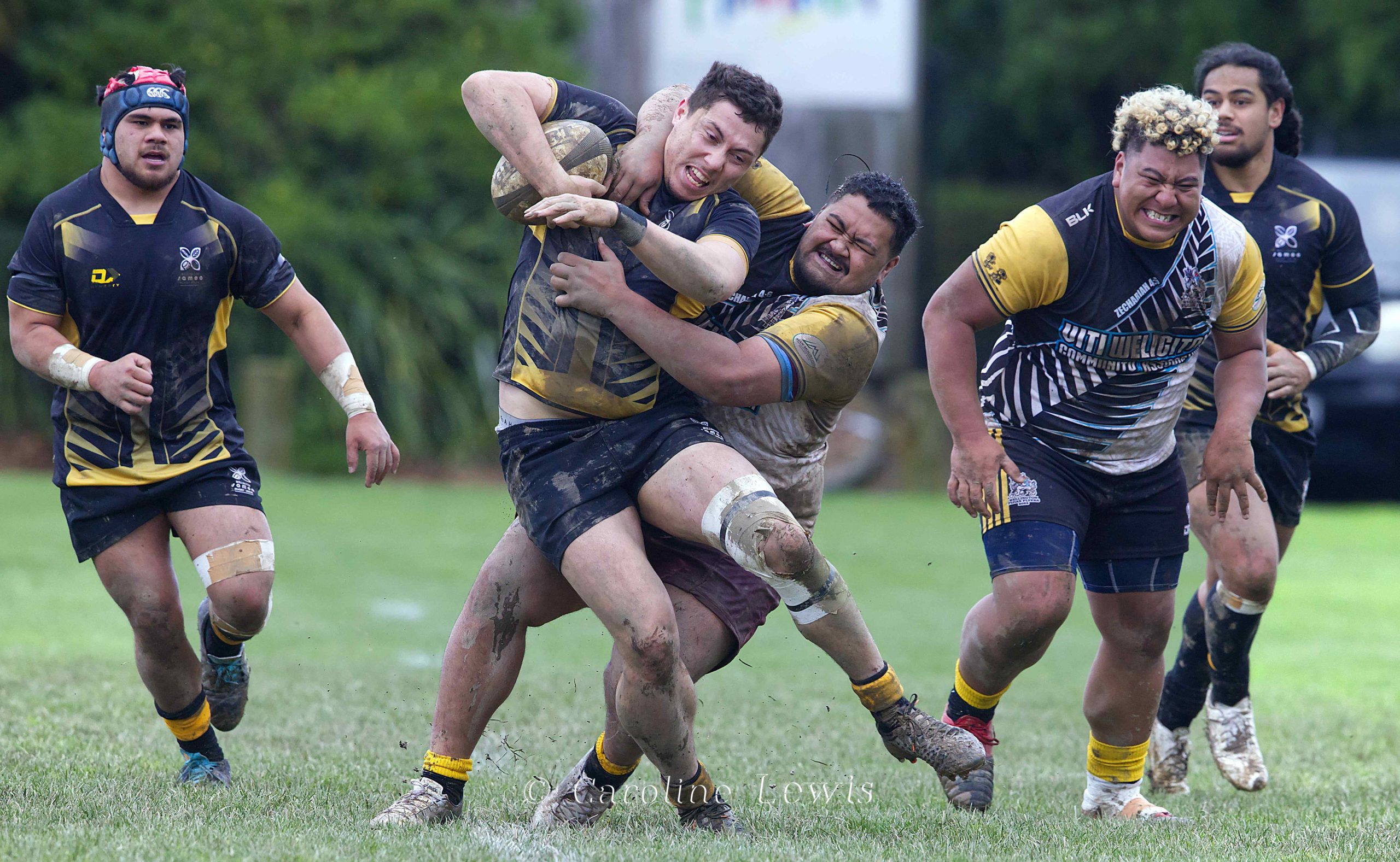 A hat-trick today for Niko Patelesio for Wellington Samoa over Wellington Fiji, but not on this occasion. His team won 41-31, more below. PHOTO: Caroline Lewis.

A busy day of school and representative rugby around the region today – with rain and mud a dominant theme.

Starting in school rugby, St Patrick’s College, Silverstream won the Hurricanes U15 tournament for the fifth time since its inception in 2011 with a gritty 8-3 win over St Peter’s College, Auckland.

A heavy downpour turned Stream No.1 into a mud bath – handling and retaining feet a significant challenge. The only points of the first-half were scored via a St Peter’s penalty.

There was so much kicking at the start of the second-half one could have confused Silverstream with Twickenham. Twice St Peter’s narrowly failed to score tries from dribbling contests along the ground.

Silverstream eventually decided to be bolder and gradually gained better field position. A penalty to first-first Kian O’Connell tied the score with about 15 minutes to spare. St Peter’s were dogged but caned in the penalty count. Repeated quick taps were fruitless for Silverstream until the ball found big No.8 Tamati Payne on the wing. Payne took out the fullback with a thunderous charge, the corner flag even tumbling in the process of the try being scored. The game ended with St Peter’s knocking on 35-metres out from the Silverstream line.

In the last remaining final of the year in Wellington college rugby, the Wellington College 4th XV met the Scots College second XV in the Premier 4 final – result TBC.

Despite wet conditions around today, there was plenty of high scoring in representative rugby this afternoon.

The Hurricanes Heartland U20s were competitive but Wellington defended well and restricted their opportunities.

Wellington played into the strong northerly in the first half on a sodden Lyndhurst Park and led 21-3 at halftime, pulling away in the second spell.

Wellington’s forwards were dominant at set piece and in open play, with Toby Crosby, Maea Tema-Schmidt and Dom Ropeti all having outstanding games.

In the other U19s Central Region Shield match in Palmerston North, the Hawke’s Bay U19S beat the Manawatu U19s 38-0. Much of the first half was played in pouring rain, and when it eased and later cleared the ground was slippery and handling errors dominated. Thus it was 0-0 at halftime, and still scoreless almost 15 minutes into the second half when the Junior Magpies broke free and ran in the first of their four tries (plus a penalty try on fulltime).

With Harry Godfrey at first five, superior size and a dominant scrum, Hawke’s Bay won comfortably in the end.

At the Petone Recreation Ground, the Wellington Samoa Men’s side beat their Wellington Fijians counterparts 41-31. The Samoans scored seven tries in their win, with wing Niko Patelesio scoring a hat-trick and Waylon Baker, Siaosi Lavea, James Mose and Owen Wright their other try-scorers.

The start of the Hurricanes Youth Council’s U18 competition today.

There were two matches at Playford Park in this series today. The Wellington Māori U18s beat the Whanganui U18s 24-12, after leading 12-7 at halftime,  and the Wellington Samoans U18s and Horowhenua-Kapiti U18s played each other – result TBC.

At Arena Manawatu, the Manawatu Evergreens beat the Wellington Centurions 52-38 in a rollercoaster Men’s Development side encounter.

Steady rain before kick-off cleared for the match, as Manawatu outscored Wellington eight tries to six, after leading 38-7 at halftime.

Wellington were chasing the game from the outset against the Manawatu side who were focused and switched on from the get-go. The home side ran in three converted tries to take a 21-0 lead inside the first 15 minutes.

The opening try was scored from a penalty into the corner and lineout drive; the second was scored in general play following a clean break by first five Isiah Armstrong-Ravula and a kick by fullback Stewart Cruden out to right wing Tavita Henare-Schuster; and the third was scored after a lineout steal 60 metres back and counter-attack, and a lovely inside pass by second five Kyle Brown to right wing Henare-Schuster who then found centre Waga Nalaga to score perhaps the try of the match.

Wellington also lost their captain and lock Akira Ieremia to injury during this period of play.

Manawatu were well on top when they scored their fourth try on the half hour mark, attacking from a lineout on the 22, and No 8 Jekope Ketu linking with  halfback Bryn Wilson who scored to make it 28-0.

Wellington finally got on the board with the next try of the match, creating multiple phases of attack inside the 22, and hooker Josh Southall scoring under the posts.

Wellington made a bustling start to the second half, a build-up and quick tap penalty providing left wing Pena Va’a a try in the corner. Va’a scored his double 10 minutes later after another attacking raid and series of penalties, collecting a cross-kick by second five Brandyn Laursen. At 38-19 with 25 minutes to play, a comeback was on.

However, Manawatu scored the game’s decisive try when locks, Josh Tuala and try-scorer Jay Rolleston connected in open play, the conversion by Armstrong-Ravula making it 45-19.

Over the next several minutes, both sides scored tit-for-tat tries, through hookers Southall and Gordon as Manawatu raised the half century.

The game was opening up at this point as Wellington belatedly strung some good play together. Wellington scored two tries to close the match by replacement forward Mika Alafitu and the last try on fulltime to former hometown halfback Logan Love.

In the 20 years that Club Rugby has been covering representative rugby between the two provinces, this is the first time that any Manawatu team has put 50 points on a Wellington side.

For Manawatu, hooker and captain Bryn Gordon, lock Rolleston, and blindside flanker Julian Goerke led the way in the forwards, whilst halfback Wilson, first five Armstrong-Ravula and centre Nalaga were prominent in the backs.

The Wairarapa-Bush union is celebrating its 50th anniversary this weekend. In the feature Heartland Championship match at Masterton, visitors Horowhenua-Kapiti won 33-17.

In Invercargill, the Wellington Lions beat the Southland Stags 41-28.

The rugby continues on Sunday with the Wellington Pride playing Canterbury in their Farah Palmer Cup Premiership semi-final.