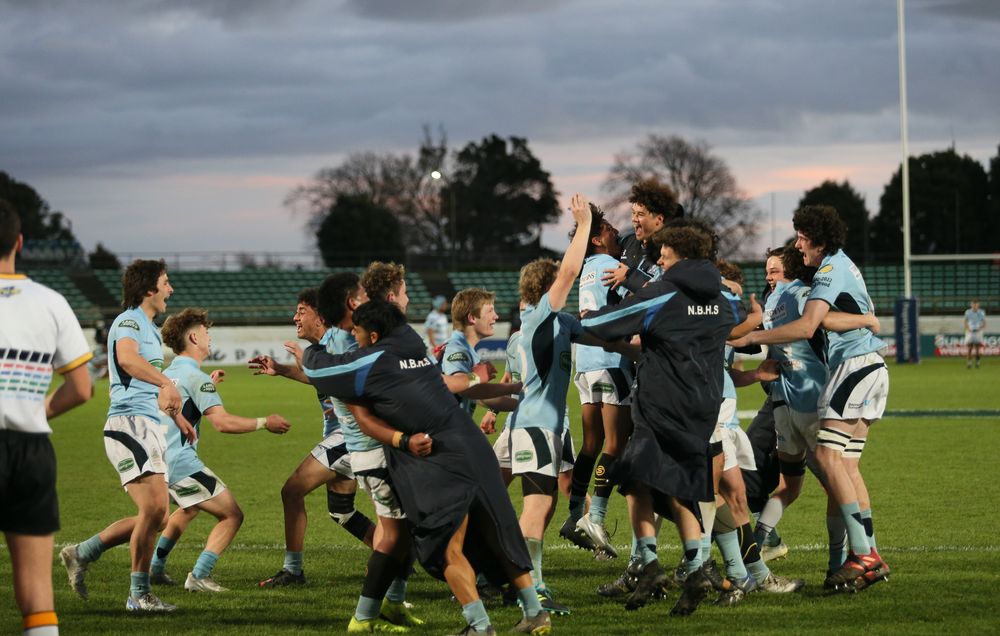 Napier Boys’ High School will represent the Hurricanes region at the National Top Four next weekend by virtue of scoring more tries in a 17-17 draw against St Patrick’s College, Silverstream in the Hurricanes Regional final at Arena Manawatu.

Napier out-scored Silverstream three tries to two and would have advanced on the next tiebreaker rule which is the first try scorer wins.

In the 64th minute Napier was ahead 17-10 when halfback Joel Russell was yellow carded for the remainder of the contest.

Silverstream launched a furious assault at the Napier line and eventually loosehead prop Senio Saleale squeezed through a pile of bodies about five-metres to the left of the right hand upright.

Silverstream halfback Ollie Cuff had the match-levelling conversion about 15-metres out, five-metres to the left of the right hand upright. He appeared naïve of both the time left in the game and the tournament rules. It took at least 35 seconds for the ball to leave the tee.

The kick, of sizable magnitude, was importantly successful. However for a kicker of Cuff’s calibre it was a straightforward attempt and could have been performed quicker allowing time for a re-start.

It must be stressed that Silverstream chasing the game was little fault of Cuff. The Year 12 has had an exceptional season and appears poised for a bright future.

It was largely a scrappy, tight, forward-oriented contest in a demanding wind that favoured Napier in the first-half.

Despite two-thirds of possession and territory in the first-spell, Napier was only ahead 5-3 at the interval.

Napier were disruptive at lineout time, complemented by an imposing maul. Their attack looked most effective when charging up the middle of the Silverstream ruck. The Catholic’s often caught short for committing less numbers.

Napier’s first try was scored by hooker Tyrone Crystal enjoying an armchair ride at the back of the maul. A Cuff penalty from 25-metres capped the first-half scoring.

The most vibrant moment of the match happened in the 46th minute when Silverstream fullback Jacob Denyer scored a clinical try from a lineout. Silverstream won the ball just inside the Napier half.

Centre Vincent Falaniko ran a clever decoy before wing David Tokalautawa cut-in fiercely on a well-timed angle to hit a hole and send Denyer free. Cuff’s sideline conversion made it 10-5.

Napier regrouped and on the back of successive penalties employed their drive again, Crystal celebrating a double.

Discipline and impatience were an issue for Silverstream and in the 56th minute, Napier reclaimed the lead when outstanding Napier captain Max Ratcliffe took a quick tap from a penalty close to the line and crashed over. First-Five Cory Berkett converted and it was 17-10.

Silverstream second-five Emmunal Solomona was a highlight reel with some brutal tackles, rampaging runs and delightful passing. No. 8 Braydon Soi was powerful and Tokalautawa has been a huge improver throughout the season.

It’s not the first time a 17-17 draw has eliminated a Wellington school from top four contention. In 2007 unbeaten Wellington College were held to a 17-17 draw by Gisborne Boys’ High School and lost on the same ruling. Gisborne went onto win the National Top Four. They beat Mount Albert Grammar School from Auckland 35-24 in the final. Future All Black Charlie Ngati scored 20 points for Gisborne.

Final round showdown for Swindale Shield