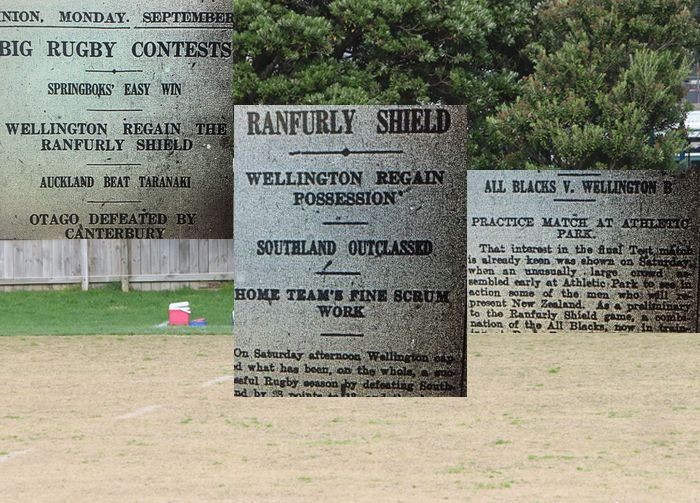 This is a previous article on this website from 2016. Re-publishing it here ahead of the Wellington Lions versus Southland match and the second All Blacks versus Argentina fixture this coming weekend.

Wellington had captured the Ranfurly Shield in 1914 off Taranaki and was building a powerful side. With the advent of the war the Shield was put away and it wasn’t until 1919 that Wellington accepted its first challenge.

Wellington also took the Shield on the road and accepted challenges from many of the top unions at their own grounds. In fact, in 16 defences during Wellington’s famous 1919-20 tenure, six were away from home – including three away defences in seven days in 1920 against South Canterbury, Otago and Southland. On this whirlwind 1920 tour they defeated South Canterbury (32-15) and Otago (16-5), but the jaded side lost it to Southland in Invercargill (6-17).

On 10 September 1921 Southland reciprocated and brought the Shield to Wellington and there were high hopes that Wellington would win it back.

Adding to the carnival atmosphere at Athletic Park that day was that the curtain-raiser was between Wellington B and the All Blacks, who were in training across the water at Day’s Bay and preparing to meet the touring Springboks in the deciding third Test of their inaugural series.

This was just a practice match, but this was a chance to impress for several young local players who would go on and play for Wellington throughout the 1920s, while some other grizzled veterans of the pre-war era wanted to prove that they could still foot it with the best. They responded by tearing into the All Blacks and winning 32-16.

This wasn’t the first, nor the last time that Wellington teams defeated the All Blacks, whom they had played regularly since 1884. In fact, Wellington sides played the national team 13 times right up to the 1970s and winning six of these matches. Wellington had beaten New Zealand 19-13 in 19-14, although the All Blacks had prevailed 38-3 the year before.

There was a 10,000 strong crowd when Wellington A and Southland ran out for the main event. The schedule was brutal in those days, and four days earlier Wellington had defeated a touring New South Wales side 16-8. That win came at a cost though, with three players injured and forced out of the Southland match.

The strength of the Wellington team at the time was undoubtedly its forward pack. Names like King, Standen, Ryan and Shearer (Jack and Sid) were synonymous with the hard, uncompromising play of the team at the time and were to the fore in this win. In its report on Monday, the Dominion was scathing of the backs for repeatedly dropping the ball and making little ground from their “passing rushes.” Halfback Harry ‘Ginger’ Nicholls was poor and his brother and first five-eighth Mark Nicholls’ only saving grace seemed to be from his goal-kicking.

Southland led 8-6 at halftime and were right in the contest. It must have been windy though, as Nicholls opened the scoring in the second half with a 60-metre penalty on the angle. He kicked another penalty soon after to extend the lead to 12-8, and from there Wellington sailed home for victory. Sid Shearer scored the last of their five tries and Wellington won 28-13.

In 1930, it was Wellington who ended one of these runs and once more they held New Zealand’s greatest sporting prize aloft. Wellington, featuring the famous 1924 All Black pair of captain Mark Nicholls at first five-eighth and former Hawke’s Bay star Bert Cooke at second five-eighth, won 12-3 in heavy mud, outscoring the home side four tries to one.

In July 1931 the Lions invited the Southlanders on to Athletic Park for their first home match of the next season for a chance to snatch it back.

Southland were the underdog but were expected to mount a strong challenge having just lost to Auckland 5-6. But any fears were allayed when Wellington won 36-13. They lost it a month later to Canterbury and have been trying to win it back and retain it for any meaningful length of time ever since.