Skip to content
You are here
Home > Club Rugby > Pioneers of rugby in Wellington 026: Arthur Kelly and the Pro Blacks 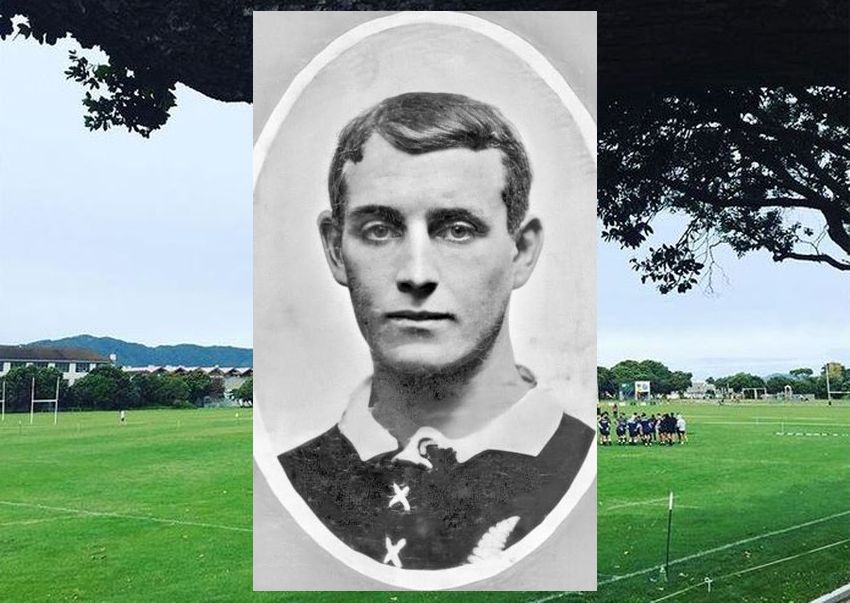 Arthur Kelly staked his reputation on his fearless tacking ability – which seemingly led to the set of events that saw him join the ‘Pro Blacks’ team on their momentous overseas tour of 1907/08 and subsequently play several seasons for the St Helen’s club in England.

Born in Petone on Christmas Eve 1886, Arthur Frederick Kelly became an apprentice with the New Zealand Railways Department and played rugby for the Petone club in the early 1900s.

Kelly was a halfback or utility back in rugby and was involved in Petone teams that won a five-peat of Senior Championship titles from 1903-07.

In 1907 the Petone club enjoyed their best season to date. Not only did the top team retain the Senior Championship, but all five of the club’s sides finished clear winners of their respective competitions. In all, these teams played 57 games and won 51, lost three and drew three of them, scoring a combined 921 points and conceding only 123.

Petone’s top side beat Poneke in the final game of the 1907 season – but without six leading players who had just joined up with the ‘Pro Blacks’ team that toured England and Australia.

Plus 24-year-old Oriental club wing Albert Baskerville (AKA Baskiville), who was the tour’s organiser and mastermind.

The team played 49 matches between August 1907 and June 1908, including seven test matches in Wales, England and Australia.

Kelly ended up playing on the wing in the 9-8 first test loss to Wales on New Year’s Day 1908, which was also New Zealand’s first rugby league test match, and at centre in the first test 18-16 loss against England on 25 January 1908, and one more of the tests (unclear which one).

A claim to fame for Kelly was scoring the first try in that first test against Wales, thus becoming the first player to score a try for the Kiwis in a rugby league international.

The idea of the tour itself was wildly popular with New Zealand’s players – with some 140 of the country’s 400 registered first-class players answering Baskerville’s call and applying for the trip.

This was largely because of the strict amateur status of rugby union at the time, and the fact that the all-conquering ‘Original’ All Blacks of 1905/06 had generated a sizable profit for the NZRU and made the players famous but they received virtually nothing from it.

It seems that who made the Pro Blacks trip was largely determined by who could come up with 50-pound deposit – about $10,000 in today’s money or six months wages back then – for a high-risk adventure that had no guarantee of success.

Perhaps greater consequences were that those players were cast out and shunned by the rugby union fraternity. Most never played rugby again, a few returned later to rugby as administrators and coaches.

Rugby union officialdom vilified the tourists right up to their day of departure. The Evening Post on 17 August 1907 had its say:

“It simply means a few months waiting now to see how the money-seekers shape…for the purity of the sport it is to be hoped that the tour is a failure financially, for that will mean the end of professionalism as far as Australia and New Zealand are concerned.”

With this backdrop, what were the circumstances of 21-year old Kelly signing up for the venture?

It seems it was a bet with some other players that led to this.

The timeline of events is sketchy, but at some point Kelly was playing in Nelson.

When in Nelson he was involved in a bet over his tackling skills. Kelly played a club game in Nelson and, winning the bet, received “liberal expenses”. His form was so impressive that Nelson selectors reportedly offered him a place in the teams Seddon Shield representative side. This led to the story of what had happened getting out and the New Zealand Rugby Union charged him with professionalism, which would have resulted in a lifetime ban from rugby Union. The charge could not be proven but instead he was found guilty of playing under an assumed name and was banned for three years. This left him eager to accept opportunities to play rugby elsewhere.

Kelly and his teammates each turned their 50-pound deposit into a 350-pound profit.

Following the tour, Kelly returned to England and signed up with St Helen’s – becoming that famous rugby league club’s first overseas signing, and one of 11 players who returned to play professionally in England.

It seems he maintained his defensive reputation, as his St Helen’s biography states: “Arthur or Podge, as he became known, was a courageous, even reckless, player, who seemed to relish nothing more than a headlong dive in the direction of on-coming footballers to stop a dribble developing.”

He made 64 appearances in six years for St Helens. He became Player-Coach and Captain of the A team and they won the Lancashire Shield in 1913-14.

He joined the Colonial Corps in World War One, settling near Oldham and passing away in 1965, aged 78.

In 2015, this website published a story about Albert Baskerville [Baskiville]

An extract from this article follows:

As a result [of organising the tour], Baskiville was banned by WRFU from entering any ground at which WRFU fixtures were being played, or training undertaken, including the Petone Recreation Ground and Athletic Park.

As history records, Baskiville’s tour was so successful, that he is credited with the Northern Rugby League game being successfully rooted in Australia. On the team’s return to New Zealand via Australia in 1908, Baskiville contracted pneumonia and died suddenly. A benefit match held at Athletic Park for his mother, a widow, attracted 8,000 spectators and raised 600 pounds.

Such was the respect Baskiville earned overseas, in 1924 members of the touring English Rugby League Team visited his grave in Karori Cemetery. Baskiville was eventually posthumously admitted to the New Zealand Sports Hall Of Fame in 1996, 88 years after his death, hounded no longer.