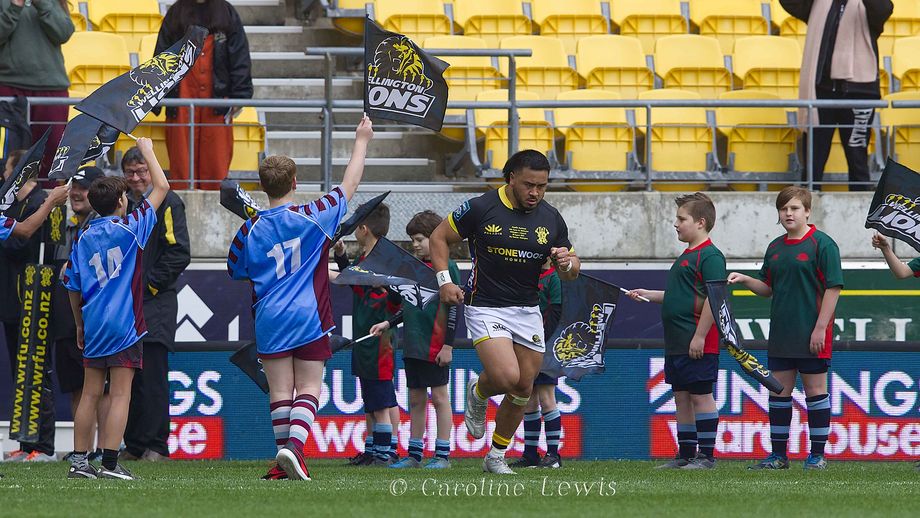 Asafo Aumua has re-signed with the Hurricanes and the Wellington Lions until 2024, it has been announced this morning.

The St Mary’s College U15 girls have won the Hurricanes U15 tournament title in Levin on Tuesday afternoon.

St Mary’s beat Manawatu rivals MANUKURA 40-19 in the 12-a-side final played in 25-minute halves at Playford Park. St Mary’s revered a 19-22 loss to them on Monday, although MANUKURA had also lost to Ngati Porou East Coast on Monday as well. East Coast beat Wainuiomata High School 29-12 in the 3 v 4 match.

UPDATED Monday: The All Black Sevens toppled Fiji 28-21 to win the World Rugby sevens tournament at Los Angeles this afternoon NZT. This is their first victory of the series in the last event of the season.

Earlier, New Zealand pipped Samoa 28-26 in a last-gasp win in their semi-final, overcoming two yellow cards and coming back from 0-14. They had also beaten Ireland 29-14 in their quarter-final.

There are four school rugby tournaments this week, three in Wellington/Hutt Valley and one in Levin.

St Pat’s Silverstream versus Napier Boys’ High School in the Hurricanes Boys First XV Final this weekend. Venue and time to be confirmed, but we have heard that this is going to be the curtain-raiser to the Manawatu v Tasman match on Friday night at Palmerston North?

Moving on to Saturday, and a heavy programme of representative matches:

Was Gus Sowakula playing for Taranaki or Wellington? The All Black No.8 got dominated by Wellington youngster Peter ‘Mini Gus’ Lakai in the Lions 31-25 win over Taranaki on Sunday. Who is more popular in Petone? Peter Lakai or Sam Blackburn?

Peter Lakai is only the sixth forward to score a hat-trick for Wellington in an NPC match. Taine Plumtree achieved the feat against Northland in a 54-7 win in 2021.Those who went before him are: Paul Quinn, against Bay of Plenty at Rotorua in 1977, Murray Mexted (Hawke’s Bay at Wellington in 1984), Brian McGratten (North Auckland – now Northland – at Wellington in 1984), Jeremy Thrush (Southland at Invercargill in 2015 and Asafo Aumua (Northland at Whangarei in 2016).

In one result we missed on Saturday owing to the game being brought forward from this Wednesday was the Hurricanes Youth Council’s ‘Life Members Cup’ final. This resulted in Lindisfarne College beating Bishop Viard College 45-7 in a fixture played in Bulls.

Feilding High School won 13 out of 17 games this season and scored 561 points, capturing the Central North Island title for the first time since the competition started in 2012. A fine rugby school, they won 182 out of 205 games between 2002 and 2011 and produced three Whitelock All Blacks, Aaron Smith, Codie Taylor and women’s stars Sarah Hirini and English hooker Amy Cokayne. Manager Blair Rogers helped set up the A-Z of the All Blacks and Black Ferns on AllBlacks.com.

In the same game (above) in Levin on Saturday, Horowhenua-Kapiti first five Hamish Buick took a heavy head knock to the ground as he was being tackled by South Canterbury’s No. 8 Siu Kakala in the act of attempting to dart in for a try. Buick was down for some time, so it was with significant relief when he sat up and walked off the field, aided by medical staff. We wish Buick all the best.

The semi-finalists have been found in the Farah Palmer Cup, the Black Ferns returning to the competition following two wins against Australia. In the Premiership defending champions Waikato host Auckland while Canterbury, winners of all six regular season matches, host Wellington. In the Championship, Otago hosts North Harbour while Hawke’s Bay will look to repeat their earlier season success over Auckland.

With the defeat at the hands of the #LosPumas, the All Blacks lost four matches so far into 2022, a figure they have only surpassed twice in their history.

In the girls, Christchurch Girls’ High School will represent the South Island after beating St Hilda’s Collegiate 60-10 on Saturday and MANUKURA will be the Hurricanes team after beating St Mary’s College 24-17 last week. The Chiefs and Blues qualifiers are TBC.

Auckland beat Otago 35-18 yesterday in the NPC, at one point leading 35-5, which included Salesi Rayasi’s customary try. But one one young player who could be talked about as an end of year tourist is young Otago lock Fabian Holland. It remains to be seen how the All Blacks finish their TRC season and what, if any, small or drastic changes will be made.

A bit concerned about the Lions goal-kicking in tight matches coming up though. Aidan Morgan and Ruben Love need to keep at it. Who else can kick goals?

Another top game by Lions hooker Asafo Aumua – until he got sin-binned. Hopefully he can improve his tackling technique and work his way back into the All Blacks in the future.

They completed an unbeaten season and won their maiden title with a 33-20 victory over Motueka High School in the final on Wednesday night. This is a combined college-club team. It’s Nayland College and the Stoke club, comprising players from six schools who play under the combined team banner. This allows those players who go to smaller schools and area schools to play the game they love. They have girls traveling up to three hours each way to train and play.

This is a model that should be encouraged and replicated elsewhere. What’s more, there could be a second tier ‘Top 4′ for these combined school and club teams, particularly in the schoolgirls game where each region is still dominated by the big single schools, i.e. St Mary’s in Wellington, Hamilton Girls’ High School, MANUKURA, Christchurch Girls’ High School. With no Co-ed Cup anymore in the Top 4 tournament perhaps an opening for this could be found?

Alternatively, in the girls space, perhaps teams competing in the Top 4 could be allowed to field one or two guest players from other schools, freeing up their eligibility? For example, a few years ago current Black Ferns prop Amy Rule attended small Riverton High School but in this scenario could have played for Southland Girls’ High School as a guest player and perhaps made a difference. Another example is this year in Dunedin, where Otago Girls’ High School beat St Hilda’s Collegiate in their Otago final but forfeited a spot in the South Island final because they declared fielding an ineligible player. That ineligible player was talented first five Abigail Paton, of East Otago High School [In Palmerston, some 50lm north of Dunedin]. East Otago does not field a team in the competition, so if Paton wanted to play, it had to be for a different school. She joined Otago Girls’ and has played every game and attended every training.

Eight players with the first name “J” took the field in Southland’s team against Northland yesterday. In 2017 Otago also fielded a team stacked with players with the first name “J”, reaching double figures on a couple of occasions. So if you’re a player named Jack, Jona, John, Jacob, Joe, Jono, Joketani Josh or James looking for a break perhaps move south to the  ‘Jighlanders’ region.

Did the Pumas win because they wear St Patrick’s College, Silverstream colours? Ten finals, ten wins in winter codes for the lads from Silverstream.

Former Black Fern and Sky TV pundit Honey Hireme–Smiler boldly predicted Argentina would win the test. Great insight for Hireme-Smiler in contrast to NRZ apologist Jeff Wilson who suggested the All Blacks would win by 13 plus.

Michael Cheika has won four of 15 tests against the All Blacks and joins Eddie Jones to have beaten the All Blacks as a coach of two countries. It became fashionable in New Zealand to dump on Cheika but he seems an authentic, passionate, smart rugby man who doesn’t speak in groans, cliches, jargon and riddles

David Kidwell, Argentina’s defence coach was born in Christchurch. He presided over one of the most embarrassing errors in Kiwi league history, losing a World Cup quarter final 4-2 to Fiji in Wellington in 2016 and then having to deal with the fallout of a coke scandal following a heavy defeat to Australia in 2017. He only won 3 of 10 tests but was a champion player and obviously a very capable observer and coach of Union.

Springboks halfback Faf de Klerk got yellow carded for a rather innocuous slap off the face on opposite Nic White in South Africa’s 25-17 loss to Australia at the Adelaide Oval. De Klerk was  just flailing his hands around at the scrum, as he often does, accidentally clipping White. Former All Black Andrew Mehrtens with an excellent commentary line, “Maybe he was trying to knock his moustache off.”

Such a shame the outrageously gifted South African centre Lukhanyo Am doesn’t touch the ball more often: Lukhanyo Am: Ten things you should know about the Springboks centre (rugbyworld.com)

Bemused to hear of the New Zealand Herald decrying the fact that both schools that contested the Auckland 1A First XV Final shut out ‘media’ throughout last week leading up to the final on Saturday at Eden Park.

Whilst this is precious of both Kelston Boys’ High School and St Peter’s College, the New Zealand Herald are, of course, hypocrites here. Putting schoolboy rugby coverage behind a paywall is poor. The quality of college sport coverage in Auckland really suffered when the excellent Campbell Burnes was cut. The media coverage generally of college sport in Auckland leaves a lot to be desired, and if the New Zealand Herald and a paywalled publication at that is all there is left in Auckland then a gaping hole exists to fill that void.

Plenty of interest in second round match-ups