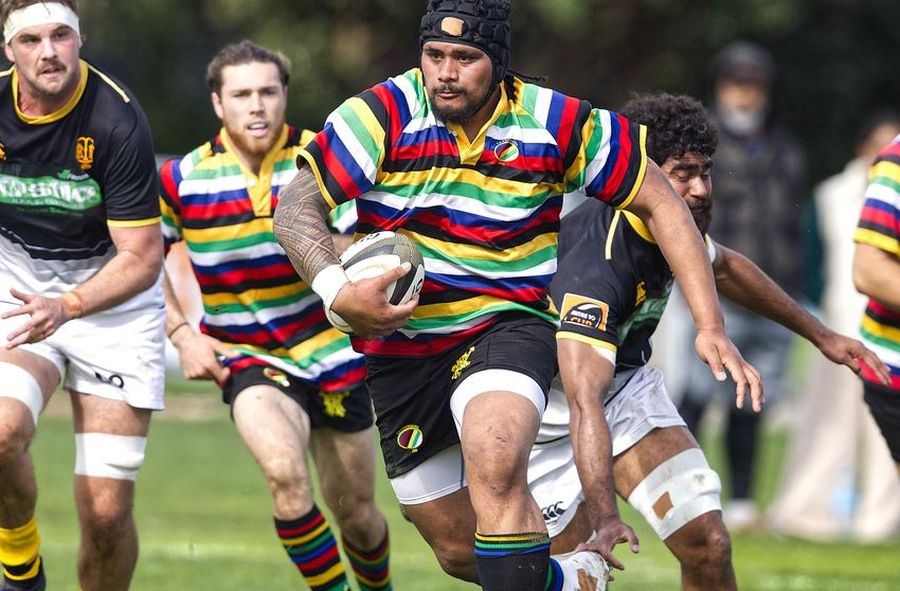 St Pat’s Silverstream are through to the Hurricanes First XV final, while there were wins today for Wellington representative teams, the Wellington Centurions, Wellington U19s, Wellington Māori and Wellington Samoans.

In the one representative match at home, the Wellington Centurions beat Taranaki Development 40-27 at the Hutt Rec.

The Centurions started well with blindside flanker Jordan Gillies breaking through after 5 minutes (below).

Taranaki Development kicked a penalty in front but from the ensuing kick-off Taranaki spilled the ball and lock Akira Ieremia re-gathered to score and make it 14-3.

Taranaki then scored a good try out wide, and with 10 minutes left in the half they got a 50-metre intercept to take the lead 15-14.

Right wing Losi Filipo then made a powerful run to score and hooker Josh Southall scored right on the break for Centurions to go in up 28-15.

In the second half Taranaki did a chip and re-gather out of their own 22m and some good passing saw them score a well-taken long distance try.

Another Taranaki try shortly after saw them get within a point at 28-27.

Jimmy Hewitt made some big charges coming off the bench and was rewarded with a try to push the lead out to 35-27 and then Pena Va’a continued his strong form from club rugby and scored out wide to seal victory for the final score line.

Taranaki were a well-drilled side with a solid set-piece and a strong scrum. For Wellignton, halfback Kyle Preston also played well, as did Filipo and lock Hugo Pummer who was good in the lineouts.

In Napier, the Wellington U19s opened their Hurricanes Central Region Shield title defence with a 22-15 over the Hawke’s Bay U19s.

Wellington played into a cold southerly breeze in the first half and led 15-3 at halftime. With the wind, Wellington maintained dominance, scoring their fourth try. Hawke’s Bay scored two seven-pointers in the second spell, the second of which was scored on fulltime.

In the other Hurricanes U19 competition match, the Manawatu U19s beat the Hurricanes Heartland U20s 28-22 in Palmerston North.

Wellington Māori met Taranaki Pasifica in the other game played in the Naki this afternoon. WellingtonMāori won 86-12.

In Auckland, the Wellington Pride missed out 26-25 to the Auckland Storm, but still sneaked into the 2022 Farah Palmer Cup semi-finals, courtesy of Counties-Manukau also losing. The currently fourth placed Pride will play top qualifiers Canterbury next week if the red and blacks beat BoP in Sunday’s game, or go home should the Volcanix tip over Canterbury.

The Pride conceded the match-winning try and conversion in the 77th minute.

The Pride led 8-7 at halftime and when debutant Ivana Samani scored in the 53rd minute the Pride held a 25-12 advantage.

Auckland had scored first midway through the first half, as the Pride were reduced to 14 players with a yellow card. First five Thamsyn Newton scored a try and kicked a penalty to give them their lead at the turnaround.

This became 15-8 just after the break with a converted try to lock and captain Jackie Patea-Fereti Auckland struck back to close the gap, but the Pride pulled away again with tries to wing Bernadette Robertson and replacement Samani.

There will be a new National Top Four First XV champion following the Hurricanes Regional semi-finals.

Defending National title holders Hastings Boys’ High School were upset by Napier Boys’ High School 20-17, rallying from 3-17 down at halftime. Hastings were the hosts and turned down the chance to play a curtain raiser to the Hawke’s Bay Ranfurly Shield match against North Harbour at McLean Park.

Napier play Silverstream next week to determine who will represent the Hurricanes region at the Top 4.

Silverstream second-five Emmanuel Solomona scored the first try after 23 minutes. An impressive skip-pass released David Tokalautawa who was pulled down close to the line. Solomona followed up and in the next ruck and crashed over. Silverstream led 5-0 at halftime.

Feilding halfback Kade Manuel struck first about five minutes into the second-spell with a break blindside from a lineout. Feilding otherwise struggled in the lineouts despite the often-dynamic play of hooker Vernon Bason. The conversion from the sideline by Mosese Palelei put Fielding ahead 7-5.

It was an intense battle at the breakdown with nether team gaining a decisive advantage. Silverstream blindside Patrick Solomona does have a size advantage over most and when he ploughed 20-metres forward like a violent bull, Silverstream was ahead 10-8. Halfback Ollie Cuff missed a sitter of a conversion. However, he was on target with a 35-metre penalty which made it 13-8.

Feilding charged down the kick-off, collected the rebound and pounded the Silverstream line which wilted out wide. The conversion attempt at 13-12 missed by a whisker.

Both sides struggled with kick-off receptions and an error by Feilding resulted in a penalty which Emmanuel Solomona kicked with the last play from 40-metres. Other standouts were Silverstream openside Connor Tuifao and loosehead Senio Sanele. Feilding second-five Ben Fakava was a handful and No.8 Mosese Bason strong.

The first game at Maidstone Park today was the Hurricanes Co-ed Cup semi-final between Upper Hutt/Heretaunga Colleges and Whanganui Collegiate.

Whanganui Collegiate won 57-7. It was 26-0 at halftime. Upper Hutt were never really in the fight against a bigger, fitter, physical side. For Whanganui, second five Will Johnston, centre Josh Brunger and right-wing Tim O’Leary all had good trips out on to the field. No. 8 Judah Saumaisue was particularly damaging for the Whanganui school and scored two tries.