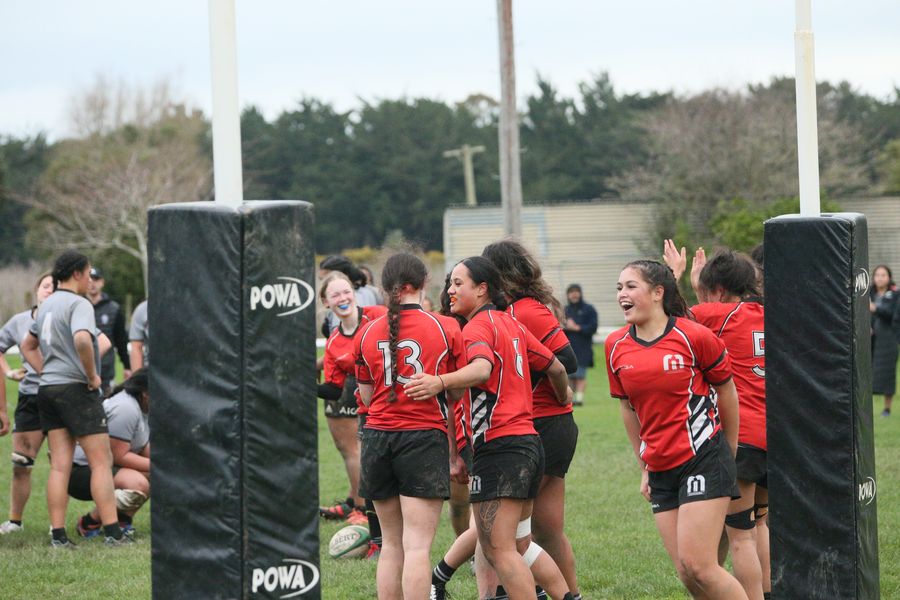 Fulltime at the Bulls RFC and MANUKURA have held on under their posts to beat St Mary’s College in the 2022 Hurricanes Schoolgirls decider.

MANUKURA beat St Mary’s College 24-17 in Bulls this afternoon to retain the Rex Kerr Cup and earn the right to represent the Hurricanes region at the National Top 4 tournament in a fortnight.

In a match worthy of a final, it was MANUKURA No. 8 Pounamu Wharehinga who scored in the far corner following a break by right wing Taylah Seng with about two minutes to play to snap a 17-17 deadlock. Halfback Maia Davis slotted the sideline conversion, asking St Mary’s to score at least a converted try in the dying embers of the game.

Soon after the restart, there was a long injury break, after which St Mary’s had one final crack at the line and went close to scoring, but MANUKURA cleared, and the fulltime whistle was blown.

The Manawatu champions had scored three consecutive tries in the second half to take a 17-12 lead.

Trailing 12-0 at halftime, No. 8 Wharehinga made a telling burst up the left-hand touch line, and second five Jayda Maniapoto scored in the corner from the next play.

MANUKURA went straight back on to attack, going wide and first five Mia Maraku going to scoring. The ball was recycled again, and centre Hope Stanshall scored their second try, converted by Davis to make it 12-12.

MANUKURA’s third straight try was scored by Davis herself, following a dropped St Mary’s ball 70 metres out, and a counterattack up the sideline by left wing Leiana Marshall-Barton.

The St Mary’s forwards, who had got on top of their opposites in the tight exchanges in the first half, rallied and first five Arene Landon-Lane made a ghosting run across the 22. Hooker Faith Vaoliko-Sei crashed over from the next pick and go to make it 17-17 with just under 10 minutes to play.

Earlier, the final kicked off under cloudy skies with St Mary’s holding the advantage of a light breeze in the first half. St Mary’s proceeded to completely dominate territory and much of the possession, using their bigger forwards and their superior scrum.

MANUKURA struggled to get out of their half, adopting box kick tactics and asking St Mary’s to run it back at them.

The weight of pressure finally broke in the 20th minute when St Mary’s went wide to fullback Billie Va’a who scored in the righthand corner.

Several minutes later, St Mary’s pushed MANUKURA off their own scrum ball and from the turnover first five Landon-Lane kicked and chased, which led to an attacking 5-metre scrum for the Wellington champions, after which No. 8 Vonzell Tusa peeled off and scored her second try under the posts to make it 12-0.

St Mary’s had the ascendancy and they could have extended their lead with another threatening raid, but MANUKURA won a couple of big breakdown penalties in succession, and then broke out themselves up into the St  Mary’s 22 for the first time in the match.

This resulted in an attacking scrum feed to MANUKURA in prime position under the posts with their backs fanned out waiting to strike.

But the St Mary’s scrum came to the fore once more – this time with a big defensive play that won them the turnover and the clearance.

St Mary’s went into the halftime clinging to their 12-0 lead, setting up an entertaining pulsating second half.

This was MANUKURA’s second win over St Mary’s this year, having defeated them 29-12 earlier this month. The Palmerston North school will now play the winner of the Blues region on day 1 of the Top 4 tournament on 9 September.

The Rex Kerr Cup is named after the Principal of Otaki College for 21 years, from 1976 to 1997. He was the first Chairman of the Hurricanes Youth Rugby Council Inc. on its formation in 2006, until retiring from this role in 2012. Rex is also the former President (and current Patron) of the Rahui Rugby & Sports Club. He is a Life Member of the Hurricanes Youth Rugby Council Inc. and New Zealand Schools Rugby Union Inc. Rex was a strong advocate for the development Girls Rugby within both organisations.

The two teams that contested the 2022 Hurricanes final were (as received):