Skip to content
You are here
Home > Club Rugby > Pioneers of rugby in Wellington 024: Hector Thomson and Duncan McGregor 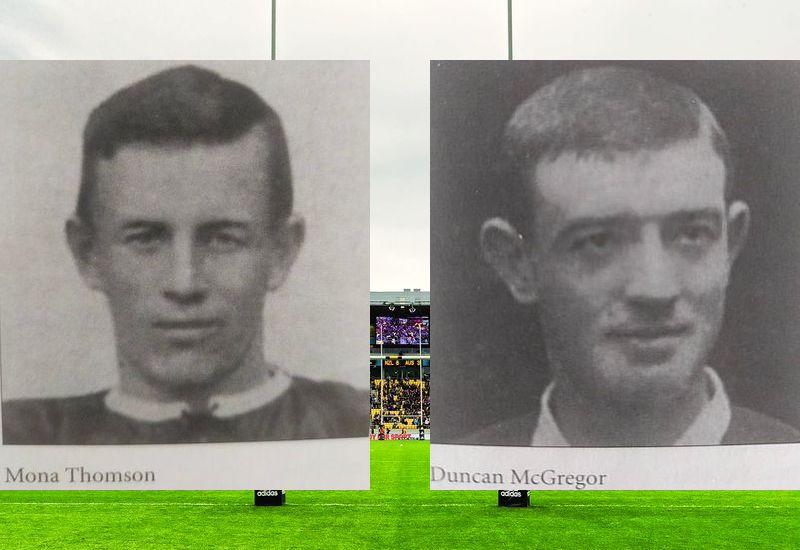 Two lightweight speedsters who played on the wing for Wellington and the All Blacks in the early 1900s.

Both McGregor and Thomson were members of the 1905-06 Originals squad that toured North America, Britain and France.

The two players were born a few months apart in 1881 and both made their way to Wellington from Christchurch. Thomson also went on to also have playing stints playing in Auckland, Canterbury and Whanganui, before returning to Wellington, while McGregor later switched to rugby league.

Thomson was the oldest of the pair by four months and was educated for the most part at Christchurch Boys’ High School, before transferring north to Wellington College and making that school’s First XV in 1897.

Given the nickname “Mona” after his like for a popular song of that name at the time, Thomson joined the newly formed Wellington College Old Boys club after leaving school. He joined a Junior grade team that would also include future All Blacks front-rankers Eddie Watkins and Ernie Todd

In 1899 in its second season this team won the WRFU Junior Championship, although Thomson is not listed as a player in that ensemble. WCOB’s other team was playing in the Senior Third grade so he could have been in that. In 1900 Mona, along with Watkins and Dodd, was part of the WCOB side that joined the Senior Championship for the first time

Thomson made the Wellington team in 1900, a busy year for the union playing a record 11 matches for eight wins, one loss and two draws.

It is unclear what Mona was doing in 1901, but in 1902 he made three appearances for Auckland (all three of their major first-class matches that season), appearing against Canterbury (scoring two tries in Auckland’s 19-3 win), Wellington (won 18-3) and Taranaki (scoring two tries in a 21-3 win). Thomson was actually listed as ‘H. O. Thompson’, but the player in Auckland’s team photo in 1902 is our guy.

It is also noted that in 1902 Auckland was awarded the Ranfurly Shield for the first time after six undefeated seasons.

Mona didn’t stay around long enough to defend the Shield, in 1903 he was on the move to his third province, Canterbury. He didn’t play for Canterbury in their Ranfurly Shield challenge against Auckland but he was capped elsewhere.

Mona then played for Whanganui in 1904 and 1905. In 1904 he was on the wing for a combined Taranaki-Manawatu-Whanganui outfit that drew 0-0 with the touring British side.

It was out of Whanganui that Mona was selected for the 1905-06 team known as the Originals and soon to be known as the All Blacks.

He was listed as the lightest player in the touring party – at 10 stone 9 pounds or 69kg.

Mona’s tour was beset by illness and injury. He only played 11 of 35 matches and none of the tests. But in these 11 games he scored 14 tries. These included a hat-trick in the 34-0 win over Cheshire and a cool 6 tries against British Columbia in a 43-6 win on the return leg.

This first All Blacks team was famous for winning all their matches except for the 0-3 defeat to Wales. They scored 215 tries in 33 matches in the UK, Ireland and France, and the players brought their attacking mindset back to New Zealand.

Mona left his other three provinces behind him and returned to Wellington in 1906. In one of Wellington’s earliest games that season, four of the recent tourists, Mona, Billy Wallace, Fred Roberts and Duncan McGregor (see below) lined up against a strong Wairarapa side. All four of these players scored early tries and Wallace converted all four to put Wellington up 20-0 (28-0 today) after as many minutes. Wellington won 62-9.

Later that season, Mona scored Wellington’s only try in an 11-5 loss to Auckland in a Ranfurly Shield challenge.

Mona’s brother Andrew Thomson also played for the Wellington province in 1906, out of WCOB.

Mona’s trail goes cold in 1907. Perhaps he took a year off or was injured?

But he re-emerges at the Oriental club in 1908, and he played a blinder for Wellington and scored the match-sealing try in their famous 19-3 win over the Anglo-Welsh early side that season.

From there he was picked in the All Blacks to play what would be his one and only test when he lined up against the tourists in the first test in Dunedin. New Zealand won 32-5 and Mona scored a try.

Mona then sustained an arm injury either before or after this match and he was forced to retire, aged 27.

Duncan “the Flying Scotsman” McGregor was already a bona fide star when he docked in Wellington in time for the 1904 season.

McGregor was from Canterbury and was on the move to Wellington with his job in the railways, joining the Petone club.

Like Mona, McGregor was a lightweight. He weighed all of 72kg but possessed extreme pace and a nose for the tryline.

He made his Canterbury debut in 1900, but it was his 1902 season for his home province that set him on his way, playing 10 first-class matches and scoring 19 tries (including 17 tries in eight games for Canterbury).

He was duly selected for the All Blacks in 1903 for their tour of Australia, scoring 11 tries in 10 matches.

Now in Wellington in 1904, he played his second test against the touring Great Britain side. He scored both New Zealand’s tries in the 9-3 win.

In 1904 McGregor had the distinction of scoring the first ever Ranfurly try when he dotted down in the 6-3 win for Wellington against Auckland.

The following week in Wellington’s first defence, they were down 13-0 but McGregor scored two tries and added a conversion and penalty to help Wellington win 15-13 and retain the Shield.

He was a certainty for the 1905-06 Originals tour, on which he set more records when he scored four tries in the 15-0 test win over England.

He departed rugby for the professional game in 1907 and was on the original tour to Great Britain with the team that would be known as the All Golds.

He stayed on in Britain and played rugby league for a club in Wales before injury forced his retirement and he returned home in 1912. He stayed involved with the league game, becoming a referee and national selector.