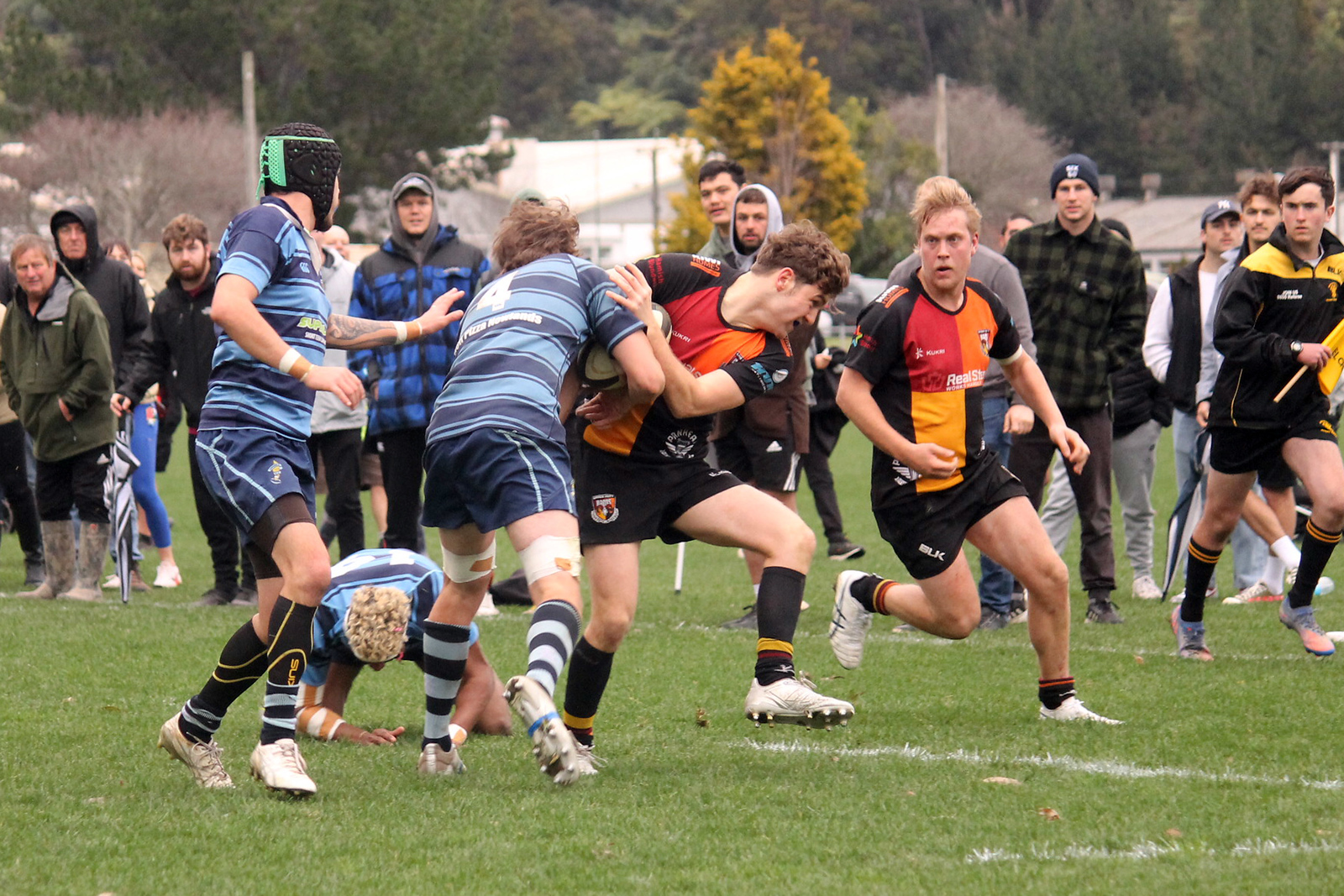 The focus this weekend obviously drifts to Lower Hutt’s Fraser Park where the remaining Club titles – bar one – will be decided. But there’s action elsewhere with a handful of rep matches being played, and College rugby is deep into their playoff action.

A run-down of all these games follows below, plus representative teamlists (as received) at the bottom.

Its an all-northern derby for the Premier 2 Ed Chaney Cup title, with defending champions Tawa looking to make it back-to-back Harper Lock Shield and Ed Chaney Cup doubles, and Norths looking to repeat their rivals feat of the Jubilee Cup-Ed Chaney double from last year. Tawa are unbeaten on the season and last tasted defeat in 2020 though they were held to a draw by OBU this year, and this term have beaten their opponents 22-3 and 56-24. But that might count for little as both sides will be able to call on some Premier players who havent triggered the unions eligibility clauses so might look different to those that fronted in those earlier encounters.

To get to this point Tawa walloped OBU 76-5 in the quarter-final round, but had to fight to beat a fired-up Poneke last Saturday when they trailed 30-24 with 20 minutes left and playing into the wind before coming home with four tries in the last quarter to win 48-21. Norths were third-qualifiers and beat Oriental Rongotai 27-10 a fortnight ago before ending HOBM’s hopes of going one better by beating them 35-18 on the Hutt Rec.

Up-and-coming referee Jack Trevella, who had last years Under 85kg decider, is the referee for this one which gets underway on the #2 field at 12.30pm.

Taking centre stage on the #1 ground is the Division 1 John E Kelly Memorial Colts decider between Petone and Hutt Old Boys Marist, which me previewed in detail yesterday. Between them they’ve only lost once this season, HOBM’s surprise 20-22 reverse to Tawa, and their meeting which preceded the senior McBain clash resulted in a 17-all draw. Petone, looking to avenge last year’s extra-time heartache against OBU, reached the final with wins over Poneke (21-5) and MSP (22-20) while HOBM’s scorelines have been more comfortable beating Pare-Plim 45-8 and OBU 31-5.

At the northern end of Fraser Park is the Division 2 Vic Calcinai Memorial decider between Paremata-Plimmerton and Poneke. Pare-Plim, who won this trophy in atrocious conditions at Maidstone Park, will be looking to take it back to Ngati Toa Domain with Poneke looking to spoil that and take it with them back to Kilbirnie. Both teams are showing the signs of a physical season but will put that behind them for one last push. For the record Pare-Plim were convincing 52-0 winners in their meeting earlier in the year.

Ollie Michie – who made his Premier debut this season – will referee the Division 1 decider for the second successive year, while the promising Luke Cunningham will take charge of the Division 2 decider.

Big day for the lightweights with all three division finals on, and all at the same 2.45pm kickoff.

The headline game is on #1, where the championship Division 1 Paul Potiki Shield final will be played between Johnsonville and the Upper Hutt Rams. Already winners of the JC Bowl, the Hawks will be looking to go one better than last year where they fell to Avalon in the final, and gain some measure of revenge for last week’s defeat to the Rams which ended their unbeaten run and took them out of the National Club Cup competition. The Rams are looking to regain the title they won in 2020 and then carry that momentum into next weeks National quarterfinal. The Rams were one-point 26-25 winners last Saturday while the Hawks won their JC Bowl meeting 20-16, so expect the third instalment to be similarly close.

Young referee Danny Cameron will have the whistle for this final.

The Division 2 Tony O’Brien Shield and Division 3 Phillip Wiggins Cup matches are on the corresponding fields. In the former, a resurgent Stokes Valley side faces Eastbourne in an all-Hutt Valley contest, while the latter is an all-Marist affair between Hutt Old Boys Marist and Marist St Pats.

In contrast to the younger faces in the other finals a pair of the WRRA’s veterans will take charge of these two with Dennis Sharman in the middle for the Division 2 final and Matthew Fawkes for the Division 3 contest.

Tomorrow also marks the semi-finals of the Reserve Grade Division 2 competition for the Alan Seerup Cup.

These see the Marist St Pat’s Internationals (1) host the Paremata-Plimmerton Punters (4) at Kilbirnie Park and the Upper Hutt Rams J8s (2) and Tawa (3) meeting on Maidstone Park.

The MSP Internationals enter this final on a seven-game second round winning streak, winning each game by an average score of 36-14 and prevailing over the Punters in last week’s final round-robin clash.

Second placed qualifier the Rams J8s sustained one loss in the second round competition, 17-26 to MSP in June, while they beat tomorrow’s quarry Tawa 31-15 a fortnight ago.

Away from the stage of the Club Finals at Fraser Park, the college grades are in playoff mode as well with most at the semi-finals stage. In the Premiership Silverstream have earned top qualifier status and they take on Rongotai at home in one semi-final and having beaten them already by 27-3 in their round-robin Traditional clash. At the other end of the region St Pats Town host Wellington College in the other at Evans Bay, and where the home side will be looking to turn over the 29-21 win that College had in their Traditional back in the first round of the competition. At stake is both a place in the final, being played under lights at Porirua Park as the third match of next Saturday’s triple-header, and in the Hurricanes region playoffs for the National Top Four in Palmerston North next month.

Silverstream are also the top qualifiers in Premier 2 through their 2nd XV, and they’re up at home ahead of their 1st XV against Bishop Viard who they beat 28-7 only last weekend. Just up the road is the second match, with Upper Hutt/Heretaunga taking on the Wellington College 2nd XV and having won their earlier meeting 21-7. Elsewhere in the flagship Under 15 Division 1 matches the Old Firm reign supreme. Silverstream A are the top qualifiers here as well and they host Rongotai A while back in town its also Wellington College against St Pats Town as their top sides meet at College.

There are two grade finals being played tomorrow. In the always hotly-contested Under 65 Division 1 for the Ina Hansen Cup it’s an all-Hutt Valley affair as Hutt International hosts Hutt Valley HS at Trentham, while across the hills the Under 15 Division 3 title will be determined as Tawa welcome Wellington College Black to the northern suburbs.

The representative schedule this weekend is highlighted by the Lions and Pride who are both on the road this weekend before returning for next Saturday’s triple-header at Porirua Park. The Lions face the challenge of Canterbury in Christchurch with the red and blacks in ominous form against Manawatu in the opening round, while the Pride are in Palmerston North to take on Manawatu and needing a win to remain in semi-finals contention and out of relegation.

In other action the Petone Rec at 1pm will be a busy place. The Samoan men’s side take to #1 looking to build on last week’s win over Taranaki Pasifika when they take on a Wairarapa-Bush side that will be licking its wounds after being mauled by the Centurions.

Both the Samoans and Wairarapa-Bush will be fielding engorged squads for this match. With 12 Samoans in the Lions, 17 in the Centurions and a handful in the Wellington U19s, the Samoans have plenty of talent of experience to call upon tomorrow.

In other action the Petone Rec at 1pm will be a busy place. The Samoan men’s side take to #1 looking to build on last weeks win over Taranaki Pasifika when they take on a Wairarapa-Bush side that will be licking its wounds after being mauled by the Centurions while the other two matches are Women’s ones; the Development Women’s side take on a Wairarapa-Bush side, while the Wellington Maori Women are up against the Whanganui Women.

Elsewhere in Wellington the Under 19s face their Tasman counterparts at Lyndhurst Park, while in a late addition to the schedule the Wellington Fijians have organised themselves and will take on the Manawatu Evergreens – effectively that unions’s ‘B’ side – at Ngati Toa Domain.

On the road this week are the Centurions who are in Whanganui to take on the locals Heartland squad and looking to add to last weekend’s scalp, while the Maori are away in Levin to do the same with the Horowhenua-Kapiti Heartland side.

Teams for Saturday (as received):

A debut off the bench for Norths outside back Julie Tusa. Black Ferns Joanah Ngan-Woo and Ayesha Leti-L’iga to come off the bench after being in camp this week. Monica Tagoai to start at centre and captain Jackie Patea-Fereti at lock this week.

The Lions have made several tweaks to their line-up that beat BoP last weekend, including a debut at openside flanker for Oriental-Rongotai’s Sione Halalilo.