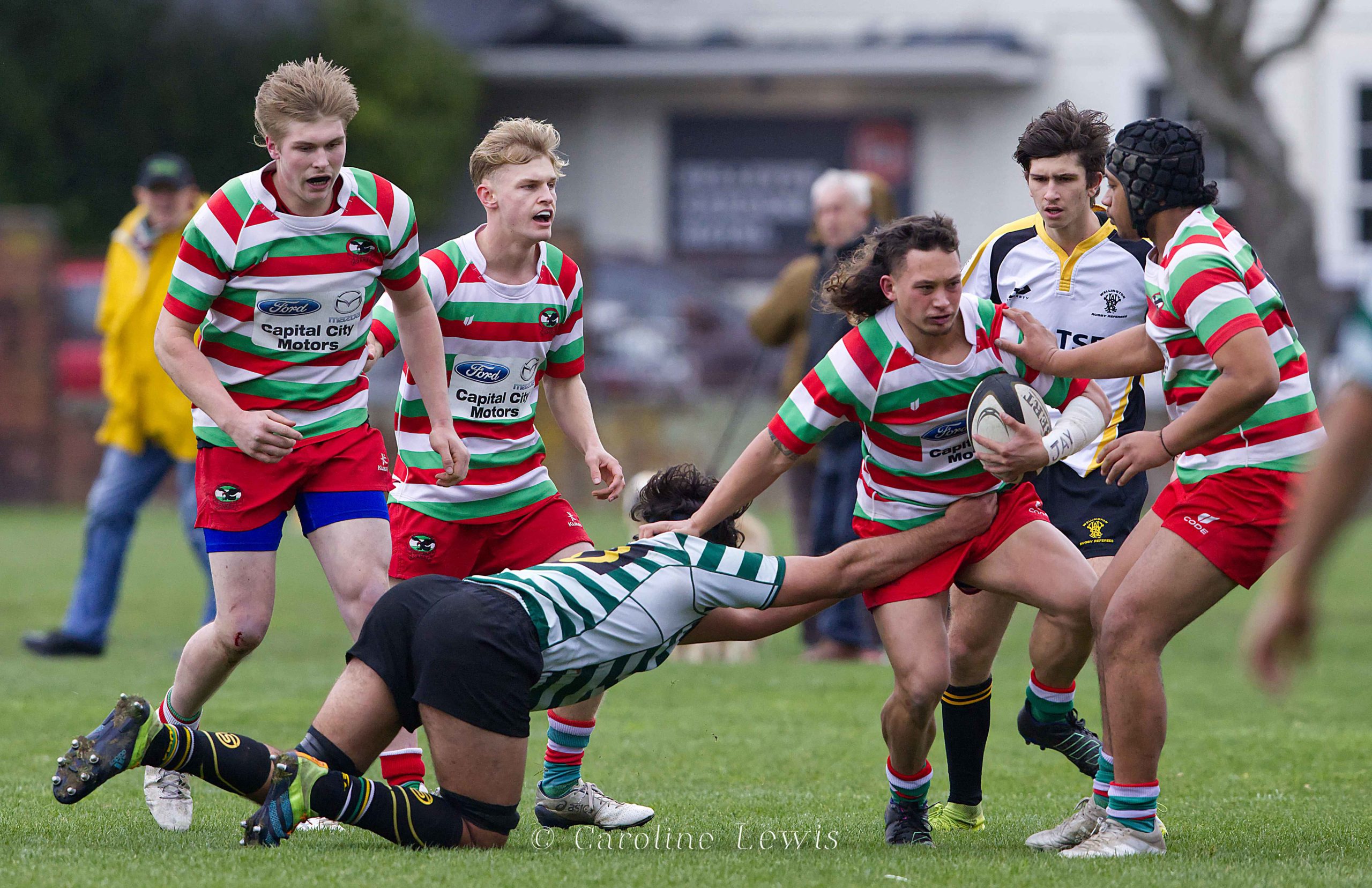 The HOBM Eagles Colts will meet Petone in next week’s Division 1 final, after their win over OBU Green today. PHOTO: Caroline Lewis.

A day of close results and much passion and drama as next week’s Colts Division 1 and 2, U85kg Divisions 1-3 and Premier 2 finalists were found in club rugby and the semi-finalists in the college competitions decided.

The representative season also got underway and was characterised by more tight rugby, setting the scene for the next several weeks of their seasons.

A round-up by grade/category follows below.

Petone and HOBM will meet in the championship John E Kelly final next Saturday after both winning their semi-finals today.

Top qualifier Petone can thank a 75th minute forwards-engineered try after almost a minute and a half of relentless phase play in front of the try line, converted by first five Rory Woollett, which gave them their two-point victory over Marist St Pat’s at the Petone Rec in their Colts semi-final.

Fourth placed qualifier MSP gave Petone an almighty scare when centre Jack Boylan cut through the midfield following a lineout and drive near the 22 and scored to put MSP up 20-10 with about 20 minutes to play. However,  after delivering a the lovely short pass to try scorer Boylan, MSP’s first five Boston Christie missed the conversion from in front which would have ultimately forced extra time.

Playing with the strong wind in the second half, Petone struck back soon after when right wing Leyton Tapa combined up towards the grandstand corner with centre Jacob Beattie and scored himself to close the gap to 20-15.

With a strong lineout and resilient defence, MSP weren’t about to roll over, and it took Petone until just before full time to breathe the air of victory.

In fact, for their part, Petone’s performance was lacklustre for much of the game, they went for individualism over teamwork at times, and their own errors were plentiful.

Much of the first half was decidedly sloppy, both sides making handling errors in the strong wind and heavy ground. Both sides kicked penalties and it was 3-3 right up until the half hour mark. It was then that MSP struck with two tries before half time, both coming from kicks in general play.

The second of these tries came from a Petone kick in general play that bounced and sat up near halfway for No. 8 Leififi Leota-Johnson who connected with halfback George D’Urban-Burgess to scamper through and score a more fortuitous try in the same corner.

The opening 10 minutes of the second half failed to ignite, leading to a double sinbinning in that same scoreboard corner, and play actually opened up more with 14 on 14.

Petone bombed a subsequent try but soon scored through blindside Bradley Pritchard off a penalty and lineout in the grandstand corner, and Woollett nailed the sideline conversion to close the gap to 15-10 to set up the tight final 20 minutes.

Upsets – at least according to seeding – defined the Division 2 Vic Calcinai Memorial semi-finals today. Eighth-seeded Poneke went up the road to Hataitai and tipped over Wellington 27-15, while a banged-up and shorthanded Paremata-Plimmerton went to Redwood Park and got past Tawa 20-12.

Ed Chaney Cup holders Tawa will get to defend their crown next week, but only after surviving an almighty scare from Poneke in their semi-final today at Lyndhurst which might gone down as one of the matches of the year.

Playing with the breeze Tawa had the visitors pinned inside their own 22 for much of of the first quarter but only had a sole try for their efforts before veteran No. 8 Peniasi Tokakece took advantage of a botched Poneke defensive lineout to barge over.

Poneke replied through their own No. 8 James “Rockkitt” Mose before Tawa added a third, but the visitors crucially hit back again just on halftime through Noah Tuifao-Galuvao to leave the margin at 19-10 and turning with the wind.

Poneke drew first blood in the second half when Ifeanyi Tonu’u-Nnebechukwu chipped over a penalty, and then hit the front when Tawa replacement Sene Nofoaiga was adjudged to have deliberately knocked-on when Poneke had players in space, conceding a penalty try and a trip to the bin. Tawa crossed almost immediately, but when Tonu’u-Nnbechukwu danced down the terrace sideline and then knocked over the conversion to put Poneke up 30-24 a real upset was on the cards.

However it wasn’t to last. Tawa prop Daniel Leone barged over from close range to put his side back in front, then sealed the match with an 80m intercept and two long-range strikes; the last coming off a 5m defensive scrum. Full-time saw the score at 48-30, which was perhaps flattering for the home team and didn’t quite reflect how close Poneke came to an upset result.

Tawa will face neighbours Norths in the final next week, after the Porirua side went to the Hutt Rec and knocked over HOBM 35-18 in the other semi-final.

A day of drama in the Under 85kg grade as next week’s finalists were found.

In the Division 1 Paul Potiki Shield both matches also doubled as the National Club Cup third round contests which added extra intrigue, with both matches ending up as one-point thrillers. First up at Kelburn Park the OBU Scallywags edged out Poneke 18-17 to progress to the national last-eight and eliminating the Wanderers from both competitions. That threw down the gauntlet to the Upper Hutt Rams in terms of the local competition, who kicked off an hour later against JC Bowl winners Johnsonville. And the Rams proved just good enough, winning 26-25 and inflicting a first loss of the year against Johnsonville and eliminating the Hawks from the national cup comp, as well as getting back ahead of the Scallywags and setting up a repeat match next weekend in the union championship final.

In the Division 2 Tony O’Brien Shield Eastbourne will take on Stokes Valley in an all-Hutt affair next week after the Gulls eliminated Avalon with a 19-10 win at Fraser Park. Stokes Valley were already through but had the weekend off as Wellington defaulted their contest yesterday. The Division 3 final will be played out between the winner of the HOBM/Wests game and MSP who beat Petone 17-13

There was plenty of intrigue in the final round of the Premiership, especially over the identity of the fourth team for next week’s playoffs. That started with the 1.00pm kick-off in Masterton, where Rongotai did what they needed to in grabbing a bonus-point 32-24 win over Wairarapa College. That result eliminated Scots from the playoff picture even before they kicked off against St Bernard’s, and made it clear to both St Bernard’s and Hutt International what they needed to do. St Bernard’s however couldn’t grab the sole point that they ultimately needed with Scots winning 26-7, while HIBS – who needed a win themselves – led 10-0 early against Town but couldn’t hold that with the Kilbirnie side winning 22-10. That result saw Town leapfrog idle Wellington College into second and they’ll host the meeting between the two in next week’s semi-finals while Silverstream, who were untroubled in beating Mana 69-0, will host Rongotai in the other.

Despite having two thirds of possession and territory,  St Bernard’s was down 14-7 at the break against Scots on a heavy home field in Lower Hutt.

Hooker Jack Singer scored the first try after 15 minutes for Scots, busting down the left wing. Scots lock Sione Latu had a powerful game and ended with a hat-trick, his first try created by Ietita Campbell drawing in four defenders.

Scots lost two players to the sin-bin and St Bernard’s wing Tamihana Ranginui scored right on the interval to make it 14-7.

St Bernard’s pick and go was an effective weapon. St Bernard’s lineout collapsed, and Scots played territory with good kicking from 10 and 12. When Latu punished the inaccurate hosts with 15 minutes left it was curtains.

In Premier 2 the Silverstream 2nds were already assured of finishing top before today, and maintained their unbeaten record by beating Bishop Viard 28-7. The pair will meet again in next weeks semifinal after the Wellington College 2nds beat Naenae 60-0 and went past Viard on the table. Upper Hutt will host College in the other semi after they beat Paraparaumu 42-12. In matches with no bearing on the top four Taita beat Hutt Valley HS 17-0, and Aotea and the Town 2nds played out a 5-all draw

The Wellington Samoans had perhaps the most spectacular win of the afternoon, beating Taranaki Pasifika 50-31 after trailing 21-12 at halftime.

At Masterton, the Wellington Centurions beat the Wairarapa-Bush Heartland squad 76-10.

The Wellington Lions open their season on Sunday with a home NPC match against the Bay of Plenty Steamers. The Wellington Pride have the bye this weekend.

McBain Shield – five of the best this century